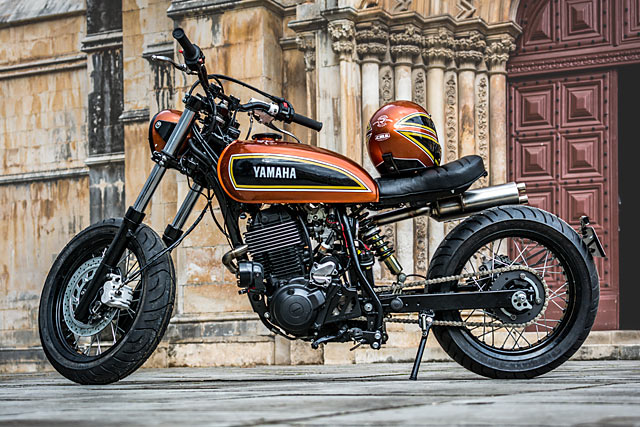 Remember that scene from Jurassic Park where Jeff Goldblum says “life, uh… finds a way”? His logic is simple – if something in nature has got even the most remote chance of happening, given enough time it probably will. A group of all female dinosaurs will eventually reproduce. Nickelback will, given enough time, write a song the doesn’t suck. And two custom bike genres which may seem mutually exclusive will eventually merge to form a whole new subspecies. Take this little Yamaha XT600 beastie, for instance. Half cafe and half tracker, it’s the latest creation from Portugal’s Redonda Motors. And while science may have never intended it to be so, we’re kind of glad nature took its course. “This is the latest project from Redonda Motors,” says the exoctically named João Barranca, the shop’s owner. “It’s a a 1998 Yamaha XT600E. This design blends the cafe racer style with that of the tracker. The intention was to build a motorcycle for the city that was very fun and easy to ride.”

The XT600 base was chosen for the build as it’s an agile old thing that has more than enough motor for everyday urban use. With that being said, João still took it upon himself to improve the handling by dropping the height of the bike by about 20cm/8″. “The fuel tank comes from an old Honda CB550, and the freshly painted design was based on the Honda bikes of the 60s, with some added Yamaha colours to make sure nothing got too blasphemous,” says João. The tank also adds to the bike’s super compact shape and minimalist aesthetic, disguising the 600cc thumper masterfully. Well, as long as you don’t count the sound it makes. The original wheels have been changed to beefier ones capable of taking a wider road tire and thusly erasing the original bike’s ‘balancing on hula hoops’ stance. The bespoke exhaust was designed and built in a high-grade stainless steel to give it both a tracker style and a beautiful bass note. Now that’s our kind of orchestra.

And the bike’s original subframe was masterfully replaced by one built from scratch by  João himself. It not only supports the seat and whatever butt cakes just so happen to be perched on it at the time, but it also hides most of the bike’s messy electrical components, too. The original air filters were replaced by new foam Ramair filters.

All the new bike’s em formação is now given out by a small Koso dial. The rear light and indicators were both changed to LEDs, and up front an old Suzuki GT750 headlight was re-jigged for its new Yamaha home.  Also notice the small projector placed on the bike’s front left-hand side. Neat-o.

“The design and creation of the subframe were the most difficult parts of this build,” says  João. “Ensuring the seat was supported with sufficient strength to hold the driver’s weight was no easy task. And with the creation of this new subframe, I of course had to reposition all the necessary components so that the motorcycle can run. That was not an easy task.” “The color and the combination of different styles are for me the best parts of this bike,” he says in summary. “The scrambler exhaust system, combined with the old school bench seat and the cafe racer fuel tank results in something I find very interesting.”

So, what’s your take? Freak of nature or the start of a wonderful new species? Somehow, we feel we’ll be seeing a lot more of these types of hybrids. Cafe’s stripped-back and mean minimalism matched with the more casual nature of an Enduro and a sprinkling of tracker DNA thrown in for good measure. If this isn’t natural, then we’re not quite sure what is.