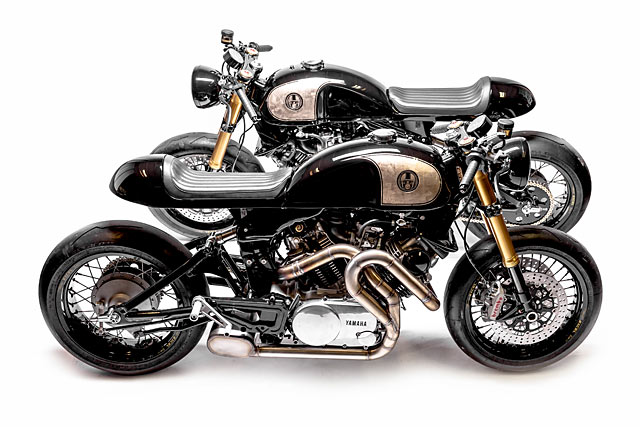 Like trying dual solos on a double neck guitar or attempting to make out with both the Polaski twins at once, building two custom bikes at once is an endeavour fraught with double the danger, stress and potential disaster. Make a bad call and you’ve got twice the mess to clean up. But get it right, and ultimate street cred awaits. It’s something that only the very talented or the very naive would attempt; and were here to say that for Dutch masters the Wrench Kings, it’s clearly the former. Teaming up with international motorcycle gear shop FortaMoto, they’ve created two Yamaha XV café racers called the ‘FortaMoto Monkeys’ that are so good, you’ll want to take a second look. The two battered and bruised TR1s were tucked away in a corner of the FortaMoto shop, just waiting to be made into something cool. ‘They would probably be called a barn-find by now on eBay’, Neal (founder of FortaMoto) says with a smile. ‘We had been in touch with Joost from Wrench Kings and together we came up with the idea to build two bikes instead of one. Completely identical and both featuring the traditional horizontal café racer look, we decided that you need to keep doing crazy things and setting unreachable goals to keep up the challenge.’ The foundation for the project had been laid. FortaMoto really liked the idea of a classic café racer combined with modern components. The bikes needed to be bad-ass, a real eye-catcher for their motorcycle clothing store in Amsterdam, but it also needed to be suitable for burning rubber on the Dutch dike roads. The classic Benelli tank was one of the first things to be included in the design, and a nice set of spoked wheels have also been drawn into the blueprints. To give an original chopper-ish bike the look of a café racer, a buddy seat was designed to make it look like it was part of the tank. The first new parts for the twins were handmade by Marcel van der Stelt, a specialist blacksmith. He created the seats from aluminium, which seamlessly connect with the tank – making them look like one contiguous part. After the bike was fully stripped, a new subframe was made which became the first step towards the bike’s strongly horizontal design. The main frame was also stripped of all those useless nooks and crannies. ‘It took a bit of trial and error, but it worked out perfectly thanks to a Suzuki GSX-R 1000 K6 USD fork’ Joost says.

The new rims were supplied by Excel, they were specially spoked by hand to fit the new GSX-R front fork. Shit hot Brembo M4 callipers were given the nod and matched to a radial RC19 brake pump from the very same Italian manufacturer. To finish off the front fork, a machined aluminium top triple by Cognito Moto is used. The rear wheel has been replaced by a 17″ spoked rim, also made by Excel. ‘This was built around the hub and brake shoe from a Yamaha XS650’, Joost says. Operating the rear brake is now done with the help of a push/pull rod, which works both ways thanks to the new braking system. The standard mono-shock is replaced by a new Hagon unit. ‘They were made two centimetres longer in the factory; this was done specially for this project’, Laurens from FortaMoto explains. The boots are the Supercorsa SP’s from Pirelli, a sporty tyre with a tight design to complete the wheels. The café racer’s valve covers have been polished, making the engine look newer than new. The carburettors have been replaced and equipped with a K&N open air filter, which is attached to the original part of the frame where the Yamaha XV’s unique design draws air from. The exhaust was made by Gerard Kramer, a specialist in the field of custom-made exhaust pipes and frames. The subtle silencer under the motorcycle doesn’t disturb the flow of the design; it does however provide the bike with sufficient silencing and a truly great sound.

The clip-ons – also taken from a Yamaha GSX-R – provide a deeper posture. To give the legs enough room, Joost placed the Tarozzi pegs as far back as possible. The aluminium seat is covered with black leather made by car interior company Ellermeyer, known for their work on the Dutch Spyker cars. The extraordinary tank and seat have been designed by Livingstone Rijff of LifeCreations. The base colour is jet black and the tank has received a detail which has been inlaid with gold leaf. The electronic heart is now the famous MotoGadget M-unit. You can start the bike by using your mobile phone, or by placing the magnetic chip against the sensor under the seat. Note that the 7″ headlight doesn’t move together with the front fork; it is centred and for that reason always looks straight ahead. A subtle LED-strip has been installed as lighting and the small MotoGadget M-blaze Pin indicator lights are brighter than the sun, but do not draw any undue attention when they are dormant.

‘They look really awesome!’ Neal says when he views the final product. Joost nods happily, ‘they do look pretty damn good’. Bertus and Brutus are now gleaming in the Dutch FortaMoto store, and they can occasionally be spotted in the centre of Amsterdam. Also, a YouTube series about the building of the bike is being made. The first episode is above, and new episodes will appear online every two weeks from now. Make sure you check them out.