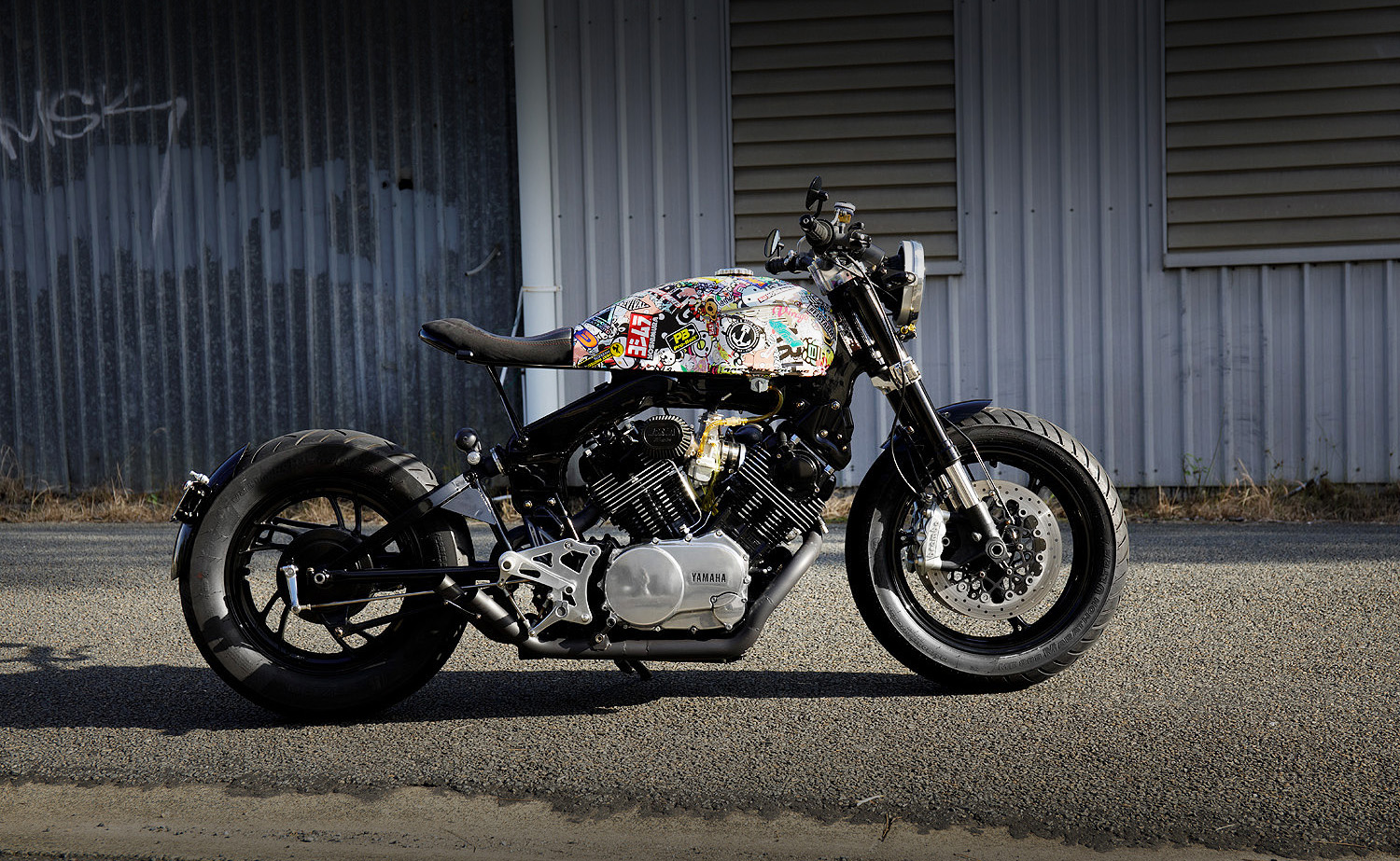 It had never occurred to me until this moment the enormous pressure that a jeweller who designs and crafts custom pieces must be under. But then you remember a core part of their business is engagement and wedding rings that cost a large sum of money, and the potential to have a Bridezilla unleash a wave of abuse and tears on you suddenly becomes extreme. Thankfully Guy Abrahamsson need not have any such concerns, the Gold Coast based jeweller is an incredible talent and mastercraftsman. But having always wanted to build a bike and transfer those skills onto a bigger canvas, he went on the hunt for a project and has delivered a stunning 1981 Yamaha Virago street machine so he can relax when away from the mini tools and microscope.

Part of the goal for the build for Guy was to see what he could build in his own back shed at home. It’s a popular pursuit all over the world, but a man’s shed in Australia is where we truly believe anything is possible and with a handful of tools and supplies from the local hardware, there is always that dream of creating a project to rival anything NASA could produce; call it our loveable optimism. Guy was a little more realistic and although he hadn’t built a bike before, he does have a track record of incredible creations from gems and soft metals.

The idea he had was to build an XV that was more like an MT range’s stylish Grandpa, more upright and comfortable than the usual cafe-styled Virago builds. So with that in mind, he was on the hunt for a donor, “The bike was advertised online, it was about an hour away so I went there straight away as they are getting harder to find. This one already had an engine swap to an 85 XV1000 but still had starter issues, It wasn’t running and hadn’t run for about 5 years, the poor thing wasn’t in the best shape but was worth a gamble on.

”He got the engine running to make sure he wasn’t wasting his time and then stripped it all down, only keeping the engine, frame, swing arm and rear wheel with brake. The frame then had all the ugly tabs removed before it was under an old doona cover to perform some at-home sandblasting, with black paint going on a host of components, including the engine which has also had the fins file finished. “I had never welded before so this was the time to start. Not having any equipment either I decided to use Oxy-Acetylene since I use that at work for soldering and taught myself to gas weld.”

This would come in very handy throughout the build and the custom rear subframe that Guy has fabricated is a testament to just how skilled he quickly became working on a larger scale with very different materials. Next, he made up the seat before Timeless Auto Trim did an incredible job covering it with a beautiful combination of leather and Alcantara. For the tank, it gets the JDM sticker bomb effect and it works brilliantly with the remainder of the bike featuring such clean details. “I replaced most of the fasteners with stainless which I polished up and then coloured to take the edge off the brightness, and some of the titanium nuts I polished and then coloured to look like zinc passivated instead.”

Having already welded on steering stops to the frame, Guy was able to adapt a complete Suzuki GSXR front end to the bike, which uses a custom machined upper triple clamp. This helps to support the more relaxed riding position, with Pro Taper raised bars that hold a pair of Brembo master cylinders, with the clutch having been converted to hydraulic. Guy even fabricated up the custom mount to run a GSXR rear shock and with radial Brembo brakes and modern rubber, she obviously performs like a dream. “I made up titanium rods for controls connected to the Cognito Moto mid sets which are mounted on some sand-cast aluminium brackets.”

Time to make that ’85 1000cc engine purr and with the starter having been fixed and knowing it ran well, it was all about giving it the accessories to make the most of that silky smooth torque. The fuelling as standard is a little soft, so to get more go juice into the mix and give a snappier response, a set of 38mm Mikuni flat slide carbs have been fitted that take their air via DNA pod filters.

The transistorised ignition system is old tech and not the best for delivering precise spark control, so to remedy this Guy pulled it all out and has replaced it with a drastically improved, C5 Optical ignition, an excellent style of upgrade for bikes from this period.

The exhaust system of any custom XV build is always a big talking point and being the capable designer and creator that he is, Guy took his newfound welding skills and has created a peach of a system. The simple lines that flow tight to the bike achieve an ultra neat look, while the twin out-turned tips give the v-twin engine the tough sound it deserves and a Dyno tune has it all running sweet.

The wiring was a bit of a mission, but the job is brilliant, and so too the custom mounts for that gorgeous headlight, which along with the indicators and switches from Purpose Built Moto help complete the ultra-neat finish.

From the overall concept and visual to the smallest of details, Guy has built one hell of a first bike, proving this craftsman’s talent can be adapted to almost any size.