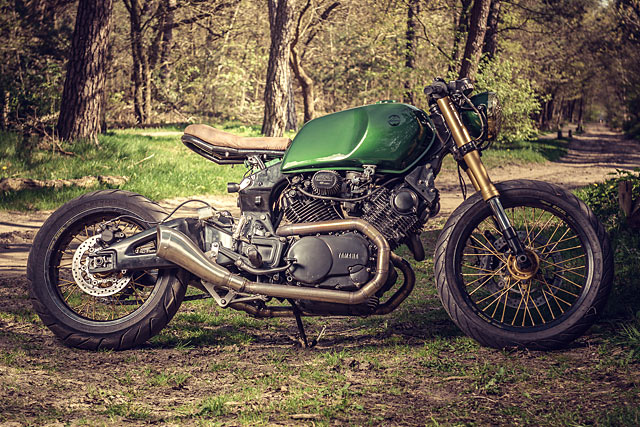 There are few things more subjective in this world than taste. One person’s coolest-ever custom can so easily be another’s garish bad taste nightmare. Who are we to say that certain types of bikes are cooler than others? It’s all too easy to giggle at other people’s bikes you think are ugly until you realise that you’re the one that’s been left behind, not them. So when Moto Adonis’ Daan Borsje saw a neon-drenched, swingarm-stretched, Tokyo-driftin’ Hayabusa race in the Caribbean city of Curaçao, he didn’t hate. Instead, he took a Yamaha XV920R and started to create. On holidays in the Dutch colony, Daan’s cold turkey moto cravings got the better of him. So when he saw the bikes gathering, he couldn’t resist checking them out. “During the race, I got to thinking,” says Daan. “While the bike’s weren’t exactly my style, I did like the long rear swingarms to keep the bikes from wheelying on full throttle.” Silver linings, much? Back in his dike-lovin’ motherland, Dan was staring down the barrel if yet another Virago custom job. If only there was a way to make it a little different from the rest. Then, lightbulb! “The Yamaha TR1 (aka the XV920R) is a hard bike to find in the Netherlands, but we managed to locate one and we really wanted to give it a little something special.” A bit of brainstorming, and boom. “We decided to give it a kind of slammed lowrider meets cafe racer look.” But the real hard work was yet to come. “We have changed a hell of a lot on this bike. Let me start from front and work to the back. Firstly, the bike was taken apart and all the useless parts were tossed away, making some space for the cool new gear we had planned.” “At the front, we mounted a KTM Excel spoked rim with a 110/80/R19 Dunlop Sportmax tyre and bolted it to a set of Suzuki GSX-R front forks. The disc brake came from a KTM as well, but the double calliper brake set-up is again from a GSX-R. The headlight is a scrambler 7.7″ item with handmade brackets.” And tucked neatly underneath, you will find 2 small indicator lights. “The speedo is an Acewell, with a revs on the main dial and speed shown as a read-out.”

[superquote]“It was painted in a lush, glossy British racing green. And doesn’t it look great with the forks?”[/superquote]

The original TR1 gas tank was lightly modified to smooth the rear end, and together with the headlight it was painted in a lush, glossy British racing green. And doesn’t it look great with the forks? “The cafe’s rear frame and seat are all handmade, with a new rear light, battery box and small rear blinkers.” But what’s a big ol’ extended swingarm without a beefy rear wheel to make the most of it? “To make it fit, we added a Honda CBR600RR rear set-up including the suspension. The rear wheel and brake is from another KTM and rubber is another Sportmax in a 180/55/R17.” Daan says that the Yamaha’s engine was taken apart and returned to a factory-fresh state, while the exhausts were supplied by Adonis alter ego, Mad Exhausts. The final touches included the front fork and wheels being painted black and gold, which really seems to gel the whole bike, ensuring all Dutch eyes are on it when the cafe gets low and cruises – or blasts – down The Hague’s Scheveningen Boulevard.