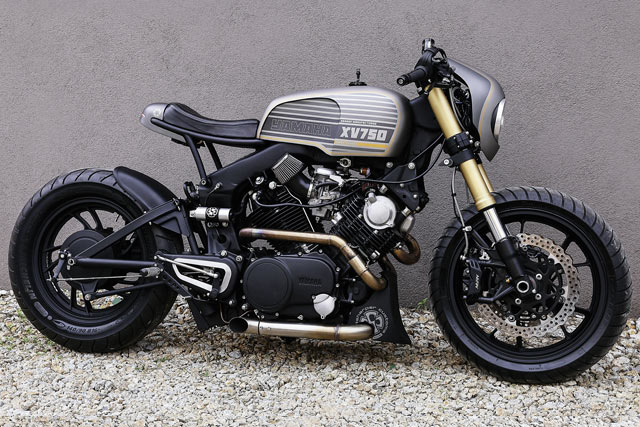 To the casual observer, the custom motorcycle industry must look like a glamorous place to be: cool bikes, big brands and beautiful women. But ask any workshop owner and they’ll tell you about long days, big bills and those customers sent straight from hell. For Jacek Mulak, head of Poland’s Cardsharper Customs and the sole employee, it all falls on his shoulders and yet despite the odds he keeps on coming up trumps. His latest client turned up with a barely rolling bike and an obsession with all things Star Wars. Just months later, he sent him on his way with a stunning 1983 Yamaha Virago XV750 Cafe Fighter, the perfect Imperial transport, known as ‘Rogue Shadow.’ Despite the obvious temptation to create a Star Wars themed bike, Jacek was wary of going down a path where motorcycle becomes geeky promotion piece. In fact so careful was he to avoid anything that was American Chopper-esque, that he repainted the bike having first laid down ghosted-in characters from the Lucas Saga. Instead, he tried to draw subtle inspiration. “I spent whole nights searching and reading stories about Dark Side spaceships with good stories and badass names.” But before he could begin to create a custom worthy of wearing the Rogue Shadow name, the personal transport of choice for Starkiller, the secret apprentice of the Sith Lord Darth Vader, he had to get the Yamaha functioning. What the client had rolled into his shop was a basket case, rusted bolts, peeling paint, corrosion as far as the eye could see and of course, the engine was rubbish. The only solution was a full rebuild and that meant taking it back to a bare frame and breathing new life into every component. One look at the build and you’ll see the attention to detail that Jacek goes to. The frame and swingarm has been smoothed out, de-tabbed and given a new coat of paint before every last bolt was replaced with new or refurbished items. With the big rear fender long gone a new rear hugger was fabricated from scratch that follows the lines of the swingarm flawlessly. The stock subframe joined many a part in the trash pile with a bolt on tubular replacement fabricated and affixed in place with a leather wrapped seat.

[superquote]“One look at the build and you’ll see the attention to detail that Jacek goes to.”[/superquote] But both builder and client had their reservations; the cafe racer looked like something others had done before. So the seat was removed and a rear cowl was hand shaped that brilliantly moulds to the lines of the rear hoop without any changes required to the frame. Featuring frenched in taillight and indicators the result is ultra clean and worth the second take, with just the seat requiring a reshape of the foam and restitching of the black leather with body matching gold thread. Hand fabricated tanks are a Cardsharper Customs speciality and Rogue Shadow is no different, with the idea first sketched out in Jacek’s notepad late one night. The shaping process is a long and arduous task, each piece of metal being offered up to the frame hundreds of times as it slowly comes together. The end result is flawless, giving the Yamaha a more cafe racer vibe, with the dramatic knee dents making for a perfect connection between seat and tank. To capture the Star Wars like look he was after Jacek then hand beat a front cowl that wraps around a modern headlight with multiple LED projector beams. Adding to the ultra aggressive look, a chin spoiler was fabricated that with a little Polish genius sees the exhaust pipes flow in and out to break up their lines. Finally, to hide the battery and electronics a custom box was built that sits below the swingarm and the regulator rectifier bolted under the seat. The tired old engine now performs like a professional athlete after it was rebuilt from top to bottom with all new parts and even given a full visual make over. The client wanted to try a single carb setup, but when it failed to deliver he trusted Jacek’s experience with the Yamaha V-twin and the pair now draw breath through K&N filters. Building one off exhausts is something Cardsharper does on every build and the full custom stainless system with removable baffled tips is a flawless creation. Modern Michelin rubber gets the job at both ends and a new remote reservoir rear shocks made setting the bike up a breeze. Up front, things on the Yamaha get even more serious with a modern USD set of forks, Nissin callipers and a pair of wave rotors increasing performance in every way. A total re-wire means tiny switches keep the front end clean and a single digital speedo hides behind the front cowl. The second paint job of the build maintains a raw look, with gold and grey graphics inspired by fonts found in a Star Wars book. Despite the stunning looks and a cafe racer that performs flawlessly the bulk of the work was spent simply restoring the XV in the first place. “You cannot customise a motorcycle which barely holds together in one piece,” smiles Jacek. But once the throttle is pinned and Rogue Shadow enters hyperspace, the rider has nothing to worry about, looking good and going fast is a Cardsharper Customs guarantee.