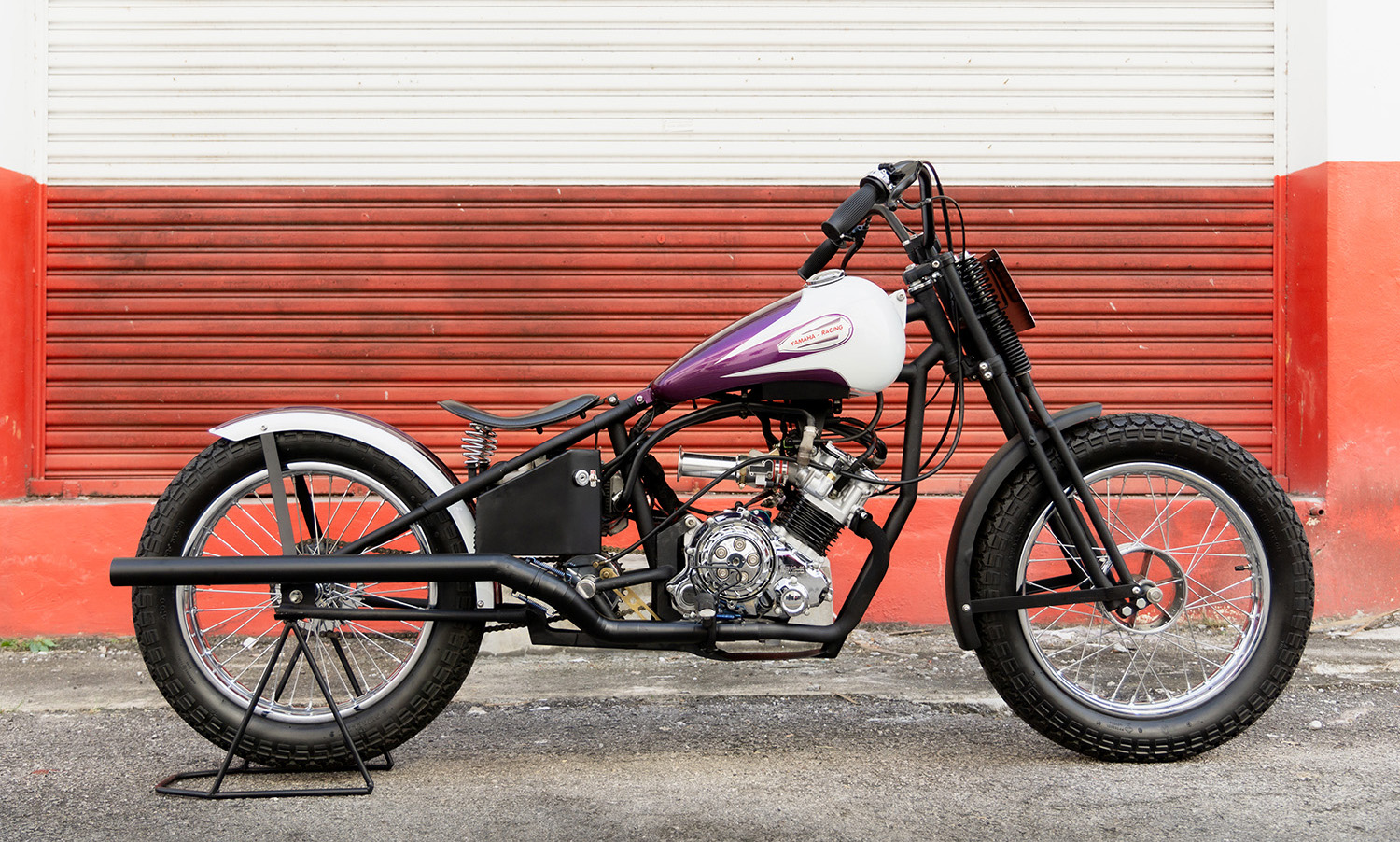 If you’re thinking about competing in motorsport these days, the first thing you’ll have to do is bury yourself in the rulebook. It’s all about conformity for parity and if you don’t conform then you can’t compete. But in the early days of board track and beach racing, the rules were considered about as important as safety, with a shrug of the shoulders; and this allowed early innovators to move the bar at lightning pace. Deeply inspired by both that philosophy and the styling of the period is Nasir Morni from the stunning state of Sarawak on the island of Borneo. Given the call to compete at the 2022 Art of Speed Malaysia ‘Invitational Bike Build Off’, he selected the country’s most common commuter scooter, and turned it into this brilliant board track meets bobber beast.

The donor bike is the ever-popular Yamaha Y15ZR, which is incredibly popular in South East Asia; think a modern super cub with flashy styling and a little extra zip. Nasir selected a 2020 model for his build and when you consider the fact it really is a scooter in every conceivable way, it’s about as far from a bobber in bike terms as you’re ever likely to get. But that was fine by Nasir as he only ever intended to use the engine and even that wouldn’t remain even remotely stock. The rest of the bike was to be hand-built, literally everything, and Nasir had some ideas on how to do a few things in a very different way.

With the stock scooter stripped of its engine, the power unit was measured up and the first task was to build a frame that would host the motor and serve as the basis of this board track bobber to be. With a mechanical bender, and a handful of pipes in 22mm and 26mm, each piece was bent up to suit the design and the rigid chassis began to take shape. The engine serves as a semi-stressed member and to provide extra strength, the backbone has been shaped from a 30mm steel tube. A great deal of inspiration was taken from the look of the Harley VL design, and you can see that most clearly in the bend of the down tube.

And just like those early HDs, the front end is a springer unit, all designed and built in house by Nasir; but if you look closely you’ll see one very clear and clever change. Getting the steering stem and bearings right on a springer to fit a modern design of neck takes some work, so Nasir combined old and new by using a set of Honda Hawk triple clamps and a custom stem to attach the suspension to the front end. Then around these, using 22mm and 26mm tubes, he built the rest of the springer unit in traditional style.

For the rolling stock, the innovation could continue, the wheels measure 18in front and rear and are all wrapped up in 4in retro rubber. But that open front hub is far from the norm, with six steel supports that then hold an outer hub ring from which the spokes can then be laced up to the chromed rims. The rear unit might not be as wild, but all chromed out and with an integrated sprocket it looks just as wicked. Then comes the rear brake – inspired by Hazan – the centrally mounted system drives a second sprocket and chain, giving an HD open primary vibe, with a solid mounted drum that is air cooled and cable-actuated to provide the stopping power.

Like Master Max, Nasir has found that it works very well, with the only danger coming should you snap a chain. That’s always a possibility, but the constant mesh gearbox of the little scooter sends less shock down the driveline. That gearbox is totally standard, the engine it shares a case with however is not! With the little donk up on the bench the cases were cracked and the original 56mm bore is pumped out to a massive 65mm upgrade and stuffed with a new piston to fill the space. The cylinder head is all race spec from a local design, with bigger valves, hotter cam, and an excellent port job.

All of this extra work means a hell of a lot more fuel can be provided to the combustion chamber and a new 200cc injector fitted into an over bored 38mm throttle body gets the job done. But you can’t just plug a new injector in and expect perfect mixtures, so Nasir sourced a programmable ECU and dialed it all in. To keep the old bike look, the water-cooled machine has the radiator remotely mounted behind the rear of the engine and a very clear cover not only hides its location but funnels air through the fins. The final touch to the driveline is the ultra cool dry clutch system that comes from a local company called Comstar.

Now Nasir could give the bike its finishing visual make over, and the split tanks are not only cut from a single piece, but one side holds the electronics, while the other side houses an alloy fuel cell to feed the injected engine. A bobber style seat was added, and the springer front gets a full fender to match the rears wrap around piece. The perfect set of bars couldn’t be found, so, using a 22mm tube Nasir bent up his own in that true vintage beach racing style.

The finishing touch is the paintwork, inspired by the ‘Cattleya’ orchid that is also the bike’s name. Nasir wanted to build a flathead Harley, but with them impossible to find where he lives, he’s gone and built his own home-grown version and it’ll still be going strong when the HD would have been leaking Texas tea!