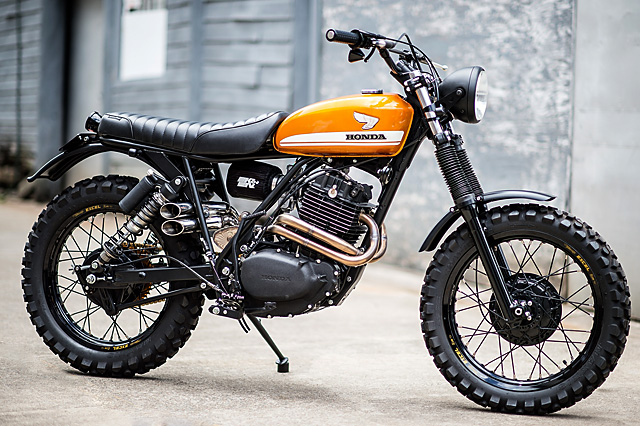 For decades the world has been told some very silly myths about Australia, everyone rides a Kangaroo to work and there is a blood thirsty, sharped clawed Drop Bear in every tree that takes the appearance of a placid Koala. But what isn’t a myth is the strength of the motorcycle scene in Australia. Luke Doyle’s 1981 Honda XL500 combines two great Aussie loves, the ability to spend fun time on the sand and hit the waves for a surf. Having owned a number of mint vintage RV-90 & 125 Suzuki Sandbikes in his 20’s Luke teamed up with Brisbane’s BikeBuilders to bring to life his ultimate dune shredding, weekend adventure machine. “I live on the southern Gold Coast and was looking to build a beach hopper and trail/mountain slayer which I could throw some board racks on, camping gear and take off down the coast or into the hills with ease.” says Luke. There were no design drawings or set parts list but a collaboration of ideas between Luke and BikeBuilders main man Leif as they slowly pieced things together from one hell of a base, the ole Honda XL. The stock XL500 frame was customised and given a new seat hoop, as well as suspension & tank mounts for the new additions that were to come. An all new battery box was fabricated to go under the seat and everything was then given a black textured powder coat by Roberto’s Custom Powder. Knowing the bike was going to be hitting the beaches and exposed to the demon salt all nuts, bolts and fasteners have been zinc plated for the ultimate protection. A set of SPP Alloy foot pegs provide plenty of grip in any conditions and a Moose racing folding shift lever finishes out the bare bones. The new tank mounts hold a 1968 Honda CB125 tank that has been left as it was found in gold with white stripes but was treated to some clay bar work and an extensive polish to restore much of the long lost luster. With a new Pingle hi-flow petcock screwed in the tank sits perfectly on the frame as if it was always meant to be. With memories of his vintage bikes Luke picked a Nitroheads seat meant for a Yamaha TW200 to give the flat look at the tank/seat transition point. Next it was time for the fenders but stuck for ideas Luke sought out Andrew at Ellaspede who came up with a few different concepts, although the final design went in a different direction for Luke “it was cool to see the bike in a different light.” Which helped him settle on the 6” Harley bobtail style rear guard trimmed to fit and a 5” wide flat style rear guard used on the front for a more squared off look. The suspension and wheel/tyre combination is vital to any bike that is going to be asked to tackle such challenging terrain and with BikeBuilders by his side Luke has it exactly right. The standard front forks have been rebuilt with OEM parts, a Progressive Suspension fork spring kit and 30W fork oil. To keep the steering precise and reduce flex a custom fork brace was fabricated and Gators fitted up to keep the muck off. At the rear the factory swingarm was refurbished with more OEM parts to operate like new with GAZI Suspension’s Hyper VMX shock absorbers in a custom 410mm length soaking up the bruising bumps. The wheels were totally rebuilt by Ash’s Spoked Wheelz with both front and rear using a 18 x 2.5 36H Black Excel Rim with Cad plated satin black powder coated spokes. These have been laced to the stock hubs that are finished in black powder coat and wrapped in aggressive Maxxis Dual Sport M6006 tires. The engine is of course Honda’s legendary 500 single with twin counter-rotating balance shafts, but it hasn’t just been cleaned up and a nice set of pipes fitted. This is one angry little monster built to speedway specifications with a host of genuine Honda parts and the best from the aftermarket. Inside the rebuilt bottom end running on new bearings and seals swings a forged Wiseco piston that bumps compression up a point to 9.6:1. Above, the SOHC 4 valve head has all new Honda parts with the ports tidied up for improved flow and a new set of valve seats. The thumper is fed its fuel by a Ballard’s spec Mikuni VM38 carb that draws breath via a K&N filter wearing a K&N wrap to keep dust and sand from getting in. On the other side of the new head is a pair of stunning one off S/S pipes built by Mick Ricketts of Tranzac Exhausts with a reverse pulse chamber muffler exiting via twin internally baffled slash cut tips. Tidying up the appearance of the engine is a hand machined tacho eliminator plug with O-ring seal. Then before it was bolted all together for the final time it was blasted and painted with heatproof paint and treated to hand filed cylinder fins. Even the gearbox has been given the new Honda parts treatment and spins a new genuine Honda 15 tooth front sprocket. The rear unit is a gold alloy JT item with 42teeth and linking the two is the stand out RK Racing 520MXZ4 chain in gold. With such an immaculate engine capable of exceptional performance it would be a crime to leave wires hanging out all over the place so the bike was given an entire new loom that is based around a Motogadget m-Unit V.2 fuse panel. All the wires are run were possible through the bars and tube for an exceptionally neat finish and joined with Wurth waterproof connectors throughout, back to the Antigravity Batteries 6 volt 8 cell Lithium-Ion unit. This feeds the comprehensive lighting setup that ensures this furious little festival of speed is as user friendly on-road as it is devastatingly fast off it. The front wears a 7 inch side mount headlight with stamped metal fork mounts while out back a POSH vintage taillight lets those trailing behind get a glimpse of Luke disappearing into the distance. So that Luke can keep an eye on them there are JayBrake billet clamp on mirrors and the turn signals are a set of “Hammer” style cast metal LED indicators with tinted lenses. POSH waffle grips give Luke something to hang onto with steering duties taken care of thanks to Renthal Jimmy Button 7/8 inch bars. These wear Magura clutch and brake split perch levers, with more from the Motogadget catalogue finishing out the functionality in the form of an m-Button, m-Switch 2 button, m-Switch 3 button and motoscope mini-speedo. It’s hard to think what else you could possibly do to an XL500 that this newly nicknamed “Zandslee” (Sand Sled) doesn’t already have. But Luke does have one final addition to complete his ultimate machine, “There is also a surfboard rack yet to come which I have not got finished yet, which will mount into that area above the rear shock pivot.” And what better way to get to the waves when the swell is pumping than on an insanely fast custom killer, dreamed up by a proud owner and brought to life with the help of some of the best in the Australian motorcycle scene.