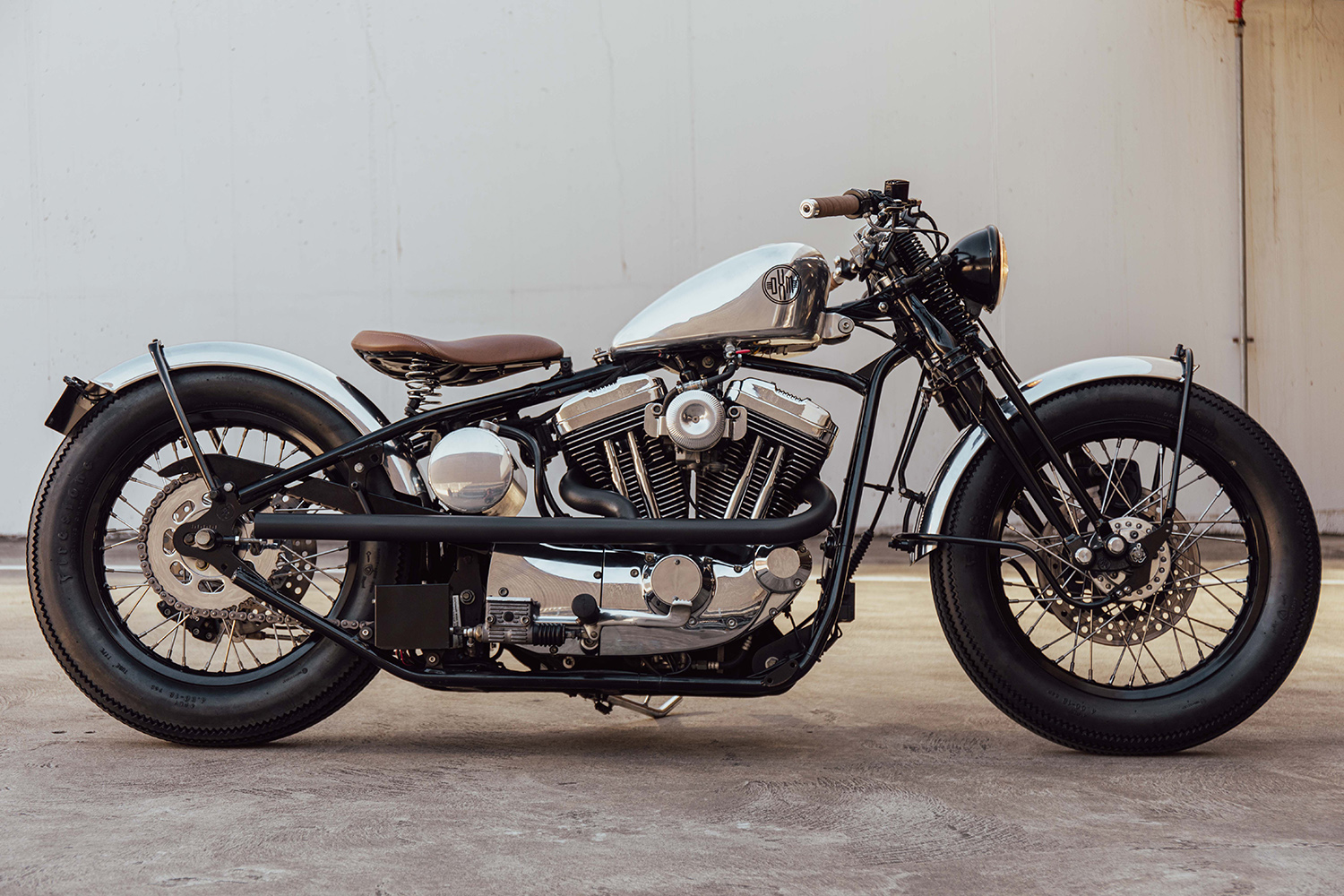 There is often a sense of mystery that surrounds any great master of their field, from the great renaissance men of the past to the modern polymaths who keep that ethos alive. In our world of wild bikes, few stand as tall in this realm than the incredible craftsman of custom cool, Shinya Kimura. The founder of the globally renowned Zero Engineering has travelled over oceans and started a new company, but true fans will recognise his ‘Zero Style’ in this bike right here. One of the company’s Type 8 production models, it too crossed the sea and arrived at another institution, Deus Customs. From their Sydney HQ they took on the task of rendering some much needed TLC and modernisation to produce a classic custom that is simply beautiful.

The ‘Type 8’ is one in a number of production series bikes that were built by Zero Engineering, and each incorporates the Zero Style of Kimura-san; with gooseneck frames, various American V-twin engines, ultra-clean lines, and envisioned as bridging the gap between vintage and modern machines. They’ve of course proved to be incredibly popular with purists and celebrities alike, with Brad Pitt and David Beckham both owning different models and a Type 6 appearing in the Iron Man movie.

Known as ‘Lead Head’, this example was handed over to Deus’s chief builder Jeremy Tagand to work his magic. “In keeping with Kimura’s philosophy of less is more, Artem’s idea for his Type 8 was to emphasise the great lines already present in the Type 8 frame while using some modern tech to bring this Twin into the 21st century.” And that frame really is the key component to the bike, with the gooseneck rigid design using a clever combination of high-grade steel and various wall thicknesses to engineer in a level of flexibility to produce an excellent ride.

In addition, it was always the intention that the frame would be capable of accepting a variety of front ends to match the low and long styling. But the one to have is the incredible creation of Zero Engineering in the springer variant. This is no off the shelf hope for the best item; it was deliberately designed to match the geometry of the frame, the flex in the neck and the overall power output of the engine. With the rigid rear, the front end becomes everything, and leaving nothing to chance, the bearings are Minebea items as used by many F1 teams.

Coming off that front end is a set of brilliant mounts that add some vintage beauty to the build. But the fenders themselves were, well, they were stuffed and needed replacing. So, Jeremy dove into his bag of tricks and came up with a set of stainless steel items for the front and back that wrap nicely around the rubber. All polished up these of course have the added benefit of perfectly matching the tank, and the dimensions are spot on, allowing the stunning lines of the frame to really take centre stage. To complete the look, a Bates style headlight shines the way, and is the perfect match for the springer front end.

Each of the Zero Engineering ‘Type” motorcycles is setup for a different engine package and the 8 is designed to accept the ever-popular 1200cc Harley Davidson Sportster Evo unit. An engine that has found its way into many customs, without the weight of its original home, it provides for excellent acceleration. But the exhaust fitted to it wasn’t to Jeremy’s desire, “The fishtail exhaust was a large, shiny distraction from an otherwise subtle build, so a straight pipe in black was the choice of volume enhancer.” All polished up and with the super neat air filter and oil tank combo in place, it’s a very tidy powertrain.

Of course, as good as any build has been in the past, the speed at which technology evolves means that an electrical system can almost always be improved, and the Type 8s was no exception. To ensure that these changes would literally disappear into the bike, a set of Kellermann’s tiny indicators have been used and you’ll probably have to zoom in to see them. An all-new Speedo also gets the call-up, and that perfect combination of vintage good looks with modern tech comes from the guys at Motogadget. Finally, to allow the rider to control it all, a set of switchblocks from Australia’s Purpose Built Moto get bolted on.

To put Artem right at home, the mid controls that place the feet directly below the rider are matched up with a set of M Bars to lower the visual stance of the bike. These have been fitted out with KustomTech products for the brake and clutch assemblies and the grips are neatly wrapped in leather. That hide, of course, perfectly matches the solo seat that is generously padded, and twin sprung, all stitched together by the guys at Badass Trim Co.

The end result is a simply stunning machine, brilliantly designed and engineered by the master himself and then perfectly tailored to roam the Sydney streets in style by the global powerhouse that is Deus Customs.