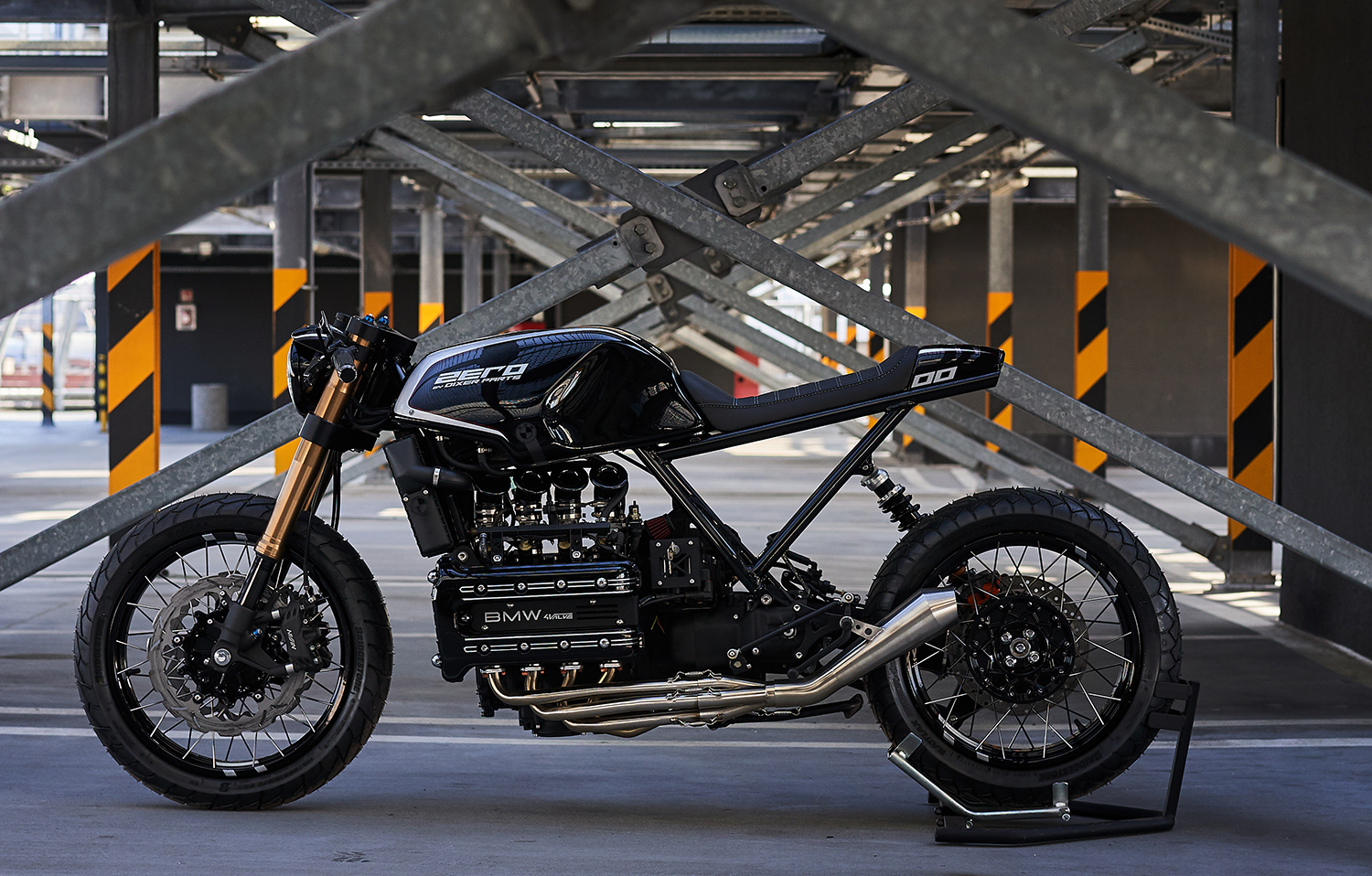 It seems at different points in time there are certain countries and regions that are hitting full stride and turning out some of the best custom bikes in the world. Right now Poland is on fire and helping to feed the enormous demand, Dixer Parts in the south of the country have products flying out the door, delivering to everyone creating a Covid-custom. But to add to the inspiration, the company first known for its incredible stunt riding also crafts some tasty creations with the very parts they sell. And if this incredible 1990 BMW K100RS known as ZERO doesn’t get you motivated, you better check your pulse!

Most owners of BMW K bikes are older gents who love them for their smooth riding and touring capability. Come time to sell and many of them balk at handing over their beloved Bavarian to a younger crowd, in fear that the panniers will be thrown off and the big girl customised. But they need not fear, in spite of being one of the world’s most conservative bikes, there was a rebel involved in its production. Martin Probst was put in charge of the engine program and the man who was behind the company’s then Formula 2 engine program was also a keen bike racer, steering a Ducati F3.

Determined to create an engine that was smooth, reliable and capable of 220km/h, he did his part to give the ‘flying brick’ some attitude under those drab garments. Now Dixer Parts have stepped up and perhaps delivering the finest example of its kind, given the rest of the bike the sort of makeover we think Probst would view with great pride. “Our main mission is production of motorcycle parts, which is why we used many of our bestsellers for this project. The main goal was to create a motorcycle that will delight with minimalism,” head honcho Adam tells us.

So with that in mind the 500lb+ stock bike was put on a serious diet until all that was left was the frame, swingarm and engine. From the centre posts back that frame is now completely custom, with two straight tubes used each side to create a triangulated subframe that ends halfway over the back of the rear tyre. Finished out in gloss black powder coat the frame makes for the perfect contrast with the engine block and driveshaft equipped swingarm that are finished out in a matte black with a textured finished.

To get it rolling the standard bearings in the neck have been knocked out and replaced so that the front end could accept a full swap to Suzuki GSXR1000 K8 components. But to go the extra mile a beautiful set of machined triple trees now hold the forks and a set of big wave pattern disc rotors are able to fit thanks to custom machined spacers for the calipers. At the rear the change to the subframe meant the YSS adjustable shock is actually one originally meant for a K110. While the R850 RT police spec rims are a much nicer touch than stock and get wrapped in Bridgestone AX41S rubber.

With Adam turning his attention to the looks and with minimalism in mind, only the stock tank makes it back on the frame. But even this is brilliantly body worked, with the knee dents expanded and the transition to the seat made more deliberate. “The rear fairing was made on a 3D printer,” he explains and is beautifully complemented to match the seat that gives the rider plenty of room while still providing a sleek look. A small cowl was fitted over the new headlight before it was off to L.C. Grafix who knocked the paintwork out of the park, with a flake effect that pops in the light and brushed alloy graphics that look like the real thing.

With the bodywork out of the shop, the attention turned to the engine, and showing off the flat-four with plenty of negative space around it was deemed priority number one. This meant throwing out the huge airbox and associated parts and replacing the intakes with 45° velocity stacks. The stainless 4 into 1 exhaust system looks a treat and adds some extra ponies. While the gloss covers and late model radiator only add to the brilliant visual appearance. But keeping it all uncrowded meant a total re-wire and it was time to dive into the Motogadget catalogue.

There is a host of the company’s parts thrown at it, but Adam’s favourite, “The ignition can be turned on via Bluetooth on a specially configured Motogadget smartphone app.” Like almost every part on the bike, each comes straight off the shelves at the Dixer warehouse and includes the stunning rearsets designed especially for K bikes that come with a Brembo master cylinder. A set of the company’s clip-ons are fitted up front and also sport a Brembo unit, while the recessed speedo is just another touch of class to an already incredible build. Probst’s has since past, but I’m sure the racer in him would have loved to throw a leg over the Dixer Parts BMW to see what his engine could really do.

You can also check out a video of this beautiful flying brick here.