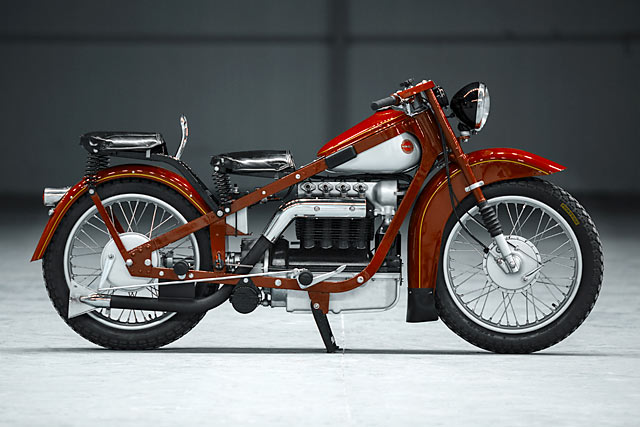 We’ve been told more than once by keyboard warriors that our taste in bikes sucks. But in a welcome twist of fate, that comment is absolutely correct for tonight’s ride. Why? Because this classically beautiful bike was manufactured by the industrial powerhouse of Fisker & Nielsen in Copenhagen; better known to you and I as the Nilfisk vacuum company. And if there’s ever a motorcycle we’d like to see brought back to life by its modern patent owners, it’d be this one. So direct from Russia’s Motorworld by V. Sheyanov, here’s a mint condition, cherry red 1938 Nimbus 750. Many early 20th Century European automotive manufacturers started with the production of bicycles, planes and even small arms. But the “Fisker & Nielsen” company, founded in 1906 by Peder Andersen Fisker and Hans Marius Nielsen, became widely known as the first manufacturer of vacuum cleaners in Europe. But luckily, the ambitions of the founders didn’t begin and end with household appliances. And so in 1919, the company released its first motorcycle, named the ‘Nimbus.’ Far from being a also-ran bike from a company looking to expand its product range, the ‘A’ model Nimbus was loaded with innovation (and a little fashion) that saw it become an instant hit.

Replaced by the ‘B’ model in 1923, its popularity continued until production suddenly  ceased in 1927, after a decision was made by the company to focus on expanding its range of domestic products. Then in 1934, the company unexpectedly announced a new model  ‘C’ Nimbus. The design of the new machine may have superficially resembled the previous models by the fact that the inline “four” was still there, but the rest of the bike was a completely different beast.

The bike’s original ‘stovepipe’ spine had been replaced with a much more modern, and better-looking perimeter duplex frame that was now made entirely of flat steel strips that were riveted together to form the bike’s jaunty new shape.

The new fuel tank was now nested in the frame from above, like a BMW or Zundapp. The rear suspension this time was made rigid instead of sprung, but in front there was now a set of innovative telescopic forks. The handlebars were formed from a wide stamped plate, and the instruments and switches were placed at its centre.

The new 746 cc, 22 hp, four-cylinder cast iron engine was now made in a single block, together with the upper half of the crankcase. The lower part was a light weight aluminium, and housed an internal oil sump. The removable cast-iron head of the engine enclosed an overhead camshaft, protected by another aluminum cover. The camshaft was driven by a vertical shaft in front of the engine, and an automotive-style distributor was place where it meshed with the camshaft, pointing forward.

The valves were arranged in a v-shape, and were opened by rocker arms that protruded through individual holes in the rocker cover – or ‘cam cover’ as the case may be. Thusly, the rocker-valve pairs were open to the elements, facilitating easy adjustment of their gaps. In a similarly eccentric engineering call, a tube from the carb to the crankcase created a vacuum down below to stop oil leaks. And in a clever modular (and quite modern) design feature, the factory was able to equip the bike with either a left hand or left foot gear change lever with ease. Customers were spoilt for choice, until they committed to a foot-only gear change lever in etc lat 1930s. The brake lever, as ever, was on the right.

Then in 1936, the front fork was strengthened, and the wheels were upgraded with reinforced hubs. At 172 kg (380 lbs), the motorcycle could reach speeds of up to 110 kmh (70 mph). In this form, production continued until the late 40s, when the bike’s last upgrade took place. This included a front fork redesign, a repositioned headlamp, and a more compact, enclosed seat suspension system.

In this form, the motorcycle was produced until 1959, when its production ceased completely, and for another four years spare parts were produced. Amazingly, there are an estimated 4000 Nimbus that are still registered and regularly ridden in Denmark, where spare parts are cheap and easily available. Suddenly, we’re getting the urge to emigrate.

The Nimbus were used both in a single variant and with sidecars. And they were not only sold to private individuals, but were also supplied to the army and police, and even exported abroad in small quantities. In the history of motorcycle construction, the Nimbus remains, perhaps, the only motorcycle that was produced for more than 20 years without any real changes. And by looking at this classic example, it’s not hard to see why.