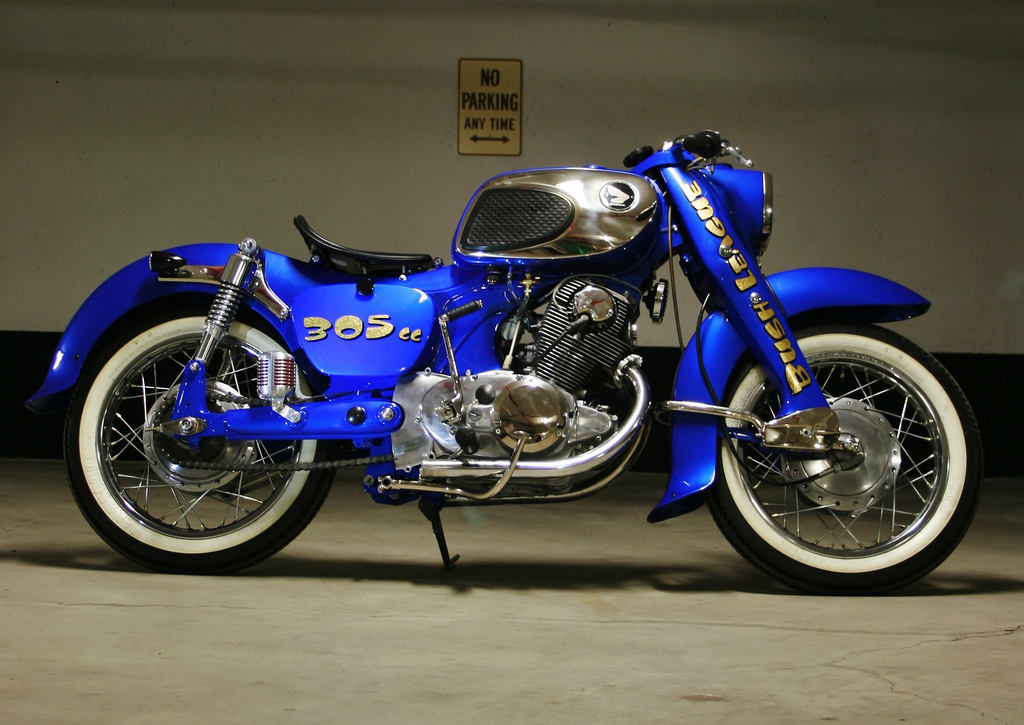 The giant gold stickers on this vintage Honda Dream won’t be to everyones taste – in fact the Honda purists are probably experiencing convulsions right about now. But for Sascha Darius, it was a way to pay homage to how “rookie the build was”. You see, ‘Bush League’ means an amateur performance the opposite to the ‘Major League’; yet the bike definitely has something special about it. We were intrigued, so we asked him some questions:

Can you tell us a little about yourself?

Born in Toronto, Canada (The Great White North). I spent the majority of my youth surfing in Central and South America with my cousin. When I ran out of money (and excuses) I decided I needed to start working, so I got a job in finance and was relocated for work assignment in Vancouver where I spent the next year wrenching on my landlord’s Guzzi in exchange for his wife’s cooking. After a good run in Vancouver, I moved back to Toronto to be with a girl now my fiance. After a year of living together, she purchased me a 1966 Honda 305 Dream as a birthday present, that’s when I knew she was a keeper! We purchased a house near the water so I wouldn’t feel so landlocked and then she announced she was moving to Boston for her PhD so I did what any logical guy would do turned my living room into a motorcycle garage! That’s where the term Bush League came from; it was a really Bush League operation. All the right ideas, all the wrong tools!

Take us through the build of the bike.

The bike is actually the 3rd incarnation of a 1966 Honda 305 Dream. It is my first build (but 3rd bike) and I have to say it really pushed the limits of my commitment to motorcycles. I never knew how much I loved them until I built this bike myself.

The frame is stamped sheet metal, which made it very different to work with than a tubular frame. I started by getting the old paint off (at a place that polishes tomb stones) and then dropped it off to my good friend Paul Dutra to weld on the new seat brackets, weld all the cracks in the sheet metal, cut a few holes in the fenders, and weld in the new gas tank bung. Some of the other mentionable parts on it are the whitewall firestones and all the bits were picked up from my buddies Herm and Jason at Dime City Cycles.

I had every bit of chrome on it replaced with nickel plating to bring it’s luster back and polished all the metal bits after stripping the factory engine paint off it. I rebuilt the carb and clutch as it ran like a bag of crap when I got it and now she fires on one kick no sweat. The bike was originally red, but my friend Jeffe shot it in an Oriental Blue Candy Concentrate (white base coat) and it has Bush league written down the forks in gold leafing as tribute to the rookie operation we were running to get this thing back together.

I originally had aftermarket pipes on it but after a few discussions with Dutra, we decided it would look better if it was only the headers, so we just weld the baffles straight into them and he put a subtle flare on the tips of the headers.

The intention of this build was to push the boundary of motorcycle classifications with a vintage motorcycle. It looks like a bobber cafe, but doesn t really fit either category entirely. It has lots of character in the details and is a lot of fun to boot around on. Did you sketch, Photoshop, or just go with the flow while building?

No Photoshop or sketching, but I had a very clear vision of what I wanted to build and a lot of flexibility to change that vision if I encountered a significant roadblock. If asked to break it down, I would say the build was 60 percent imagination, 35 percent planned, 10 percent ignorance, and 5 percent blind stupidity. That’s right, it equals 110% – It’s just that kickass!

Did you have any help building the bike?

Absolutely, I have a few good friends that I have to pay homage to for their help:
AJ – The little lady in my life. (No comment – Andrew)
Cam – Couldn’t have put humpty dumpty back together again without you bro.
Dutra – Great fabricator and friend who stood by me on this build from start to finish.
Dre – Countless hours of talking smack over assembly.
LoudMouse – Keep the cheap beer stocked I’m going to pay you a visit.
TD Visa – For raising my credit card limit when things got expensive.
Forums – All the wrenches on DoTheTon.com and Honda305.com
Shops – Dutra Customs the seat and bars significantly changed the riding position making it more aggressive. It feels like you are tightly seated because your knees are so high and your arms are so low when riding it. The new rear suspension made it feel unforgiving on bumps but that s the way I like it I want to know if I’ve run over something irregular, maybe that’s the old sport bike owner in me speaking. It’s only a 305cc bike but when you combine the ride height, seating position, sound, and add in a rebuilt motor it feels like a giant. Any lessons you’ve learnt from the build?

Yes, I got owned by this bike at times. For anyone considering building a bike, here’s a few tips:
– Paint can be scratched during assembly, it does more damage to your soul than the bike.
– If you have soft hands at the end of your build, you did something wrong.
– If your mom/girlfriend says “No”, chances are it’s going to make you cooler.
– Everything on a motorcycle performs a mechanical function, figure out what that function is and you will understand what’s not working correctly.
– Make rookie mistakes early, as later on in the build they become expensive mistakes. If money was no object, what would be your ultimate motorcycle?

It’s really tough to say, I have a fondness for a few different bikes but I would probably go with one of the following:
– 1990 GSXR750 for the Retro factor
– 1940’s Norton Manx it was built with such purpose
– 1970’s Harley Davidson XR750 It s a legend…who doesn t want that in their garage?!
– The Beezerker built by Chris Flechtner from Speed Shop Design

What’s next for you?

Tough to say, I will probably turn out some wild machine again in a year, maybe a Triumph Bonnie next time that bikes does something to me.