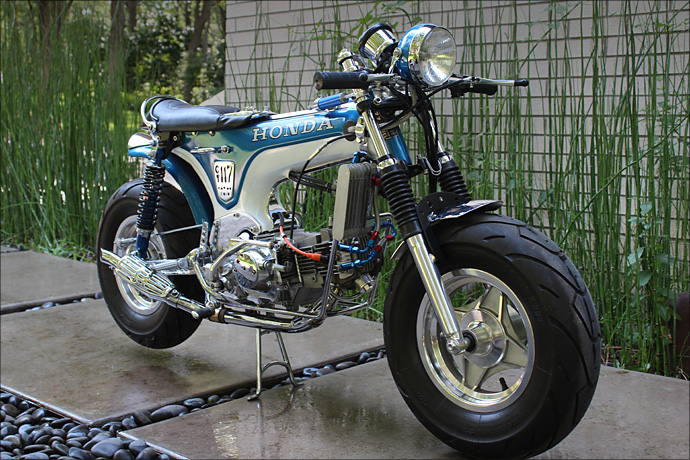 Customising a bike is in many ways a truly epic undertaking. It’s like the Everest climb of the mechanical world, requiring equal parts engineering skills, design, creativity, problem solving, patience and brute force. So now imagine we tell you the story of a man who climbed his own personal motorbike Everest, but decided to do it walking backwards, naked, while carrying his mother-in-law on his back. That’s about the size of the challenge that Texan Dave Morales undertook when he committed to customising what could easily be the world’s most uncustomised bike. No pre-fab parts or extensive online repositories of information for this intrepid explorer, no sir. A mission of this magnitude is tantamount to going when no man has gone before. And now that we gaze admirably upon his creation, we think it’s fair to say that what he has achieved is much more than one big step for Dave, but it’s also one giant leap for biker-kind. Houston, we have a custom… “My name is David Morales. I live in Denton, Texas, about 30 miles north of Dallas. Customizing bikes is something I’ve gotten into the last few years, with a background in all sorts of metal work from jewelry to hotrod autos, to boutique electronics. The 1977 CT70 or Dax bike was one of two given to me for restoration of a Honda SL70 done for a friend. The bike was little more than a roller, with a worn out 1970 CT70 H engine, and many missing parts. The engine ended up in a restored 1971 CT70. The frame sat on the floor of the shop under a table, and I tried to give it away at some point, but no takers.” “Most of the custom bikes I have made start with less than perfect frames, that are never going to be good enough for a complete stock restoration, or are less desirable because of the year model. While this frame was not defective, there isn’t much interest in the particular year. There was no finished bike in mind at the start, but a stripped-down cafe somehow got stuck in my mind. Not just because I had not seen it attempted, but because it was such an unlikely candidate. I would hardly call the end result stripped down, probably could have done less chrome, but oh well…” “I started the project making the clubman style front bars from 1969 Z50A and 1973 SL70 handlebar pieces. The front end was lowered 30cm by way of a newly fabricated top clamp made from two original style ones. This also gave a significant amount of preload on the front shocks, and reduced travel. These bikes were made for off-roading by children and have notoriously soft suspensions. A fork cross brace was also fabricated to tighten up the front end. The handlebar mount is kind of interesting in that is the lower portion of a triple tree brace, turned around. This allows the whole handlebar assembly to slide up or down on the forks. It also further tightens the front forks.” “The body was modified extensively, with thin plates of metal added outside to smooth the usually stepped lower portion of the frame, and interior boxing and cross bracing. Aluminum torque plates were fabricated for the lower body where the engine and rear fork mate with the frame. These Dax frames are made with fairly light gauge metal, with a lot of body flexing as a result. To try and compensate further in the rear suspension, the top shock mount was redesigned to lower it 30cm, with a two bolt shackle to replace the normal single unshackled ones. This also allowed shorter 280mm shocks to be used, limiting travel. An interior cross brace was fabricated between the upper shock mounts. There is an all but hidden brace that runs from the rear engine mount to the tail of the frame. Even the seat is used to brace the rear portion of the frame, with solid steel members anchored securely at both ends.” “The engine is a CRF70 lower case with a stroker crank and new piston and head for 117cc’s. The intake manifold, carb and intake boot are from a 1966 CT90, one of few Honda/Keihin downdraft carbs. The velocity stack is a Webber, with a grill made from a portion of a crock-pot assembly. The engine cradle and rear peg mounts are one solid piece, made of steel. The rear fork and shocks are from Kitaco. Michelin tires. The exhaust was fashioned from a Norton 850 commando pipe with a modified 1969 Z50 canister, and CT90 heat shields. A number of parts were fabricated from aluminum billet for this project. I did all the fabrication on this project, all body and paint, everything but the chrome plating and sewing of the seat cover.” “This bike is a blast to ride, as quick as any small bike should be, and EVERYONE has a Dax story from their youth to tell you when they see it. I have only put a limited amount of miles on since final completion, most of the miles on this thing were during the shake-down. And I’m glad to say I have had a lot of positive responses to the bike.”

So next time you are lying in bed cursing your “bad luck” when the mass-produced rear-sets you ordered from eBay are running a whole 24 hours late, spare a thought for the pioneers. The wild ones, the ones who tread the road less travelled – or as we will call them from now on, the “Dax” men.

Update: we have video!