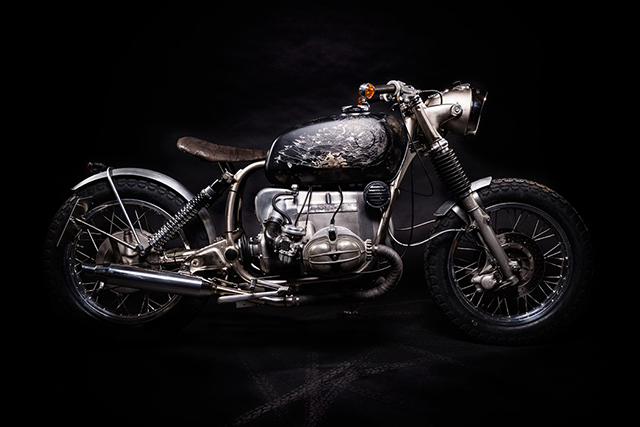 El Solitario Motor Co. is a little custom shop nestled outside a tiny village in the Spanish countryside. Staffed by four regulars, David, Valeria, Frank and Tony, the operation is assisted by a group of friends who drift in and out of the shop in their spare time to lend a hand. Known for their raw, eclectic builds, El Solitario collaborated with famed German workshop Urban Motor to produce this 1978 BMW R80/7 bobber dubbed ‘Gabriel’. Urban Motor lead the project doing all the mechanical work while El Solitario added their creative offbeat style to the aesthetics. As it turned out, building ‘Gabriel’ was a match made in heaven. Though the process sounds quite deliberate, ‘Gabriel’ only came into being by chance, after meeting a fellow bike builder in Germany who did very different work to their own. “When I first met Peter from Urban Motor in Berlin, I was amazed by the quality and proficiency of his builds,” says David, chief instigator at El Solitario. “I was happy to see that he loved my bikes too because of the ‘enfant terrible’ wild factor we emboss on all our creations.”

So they decided to collaborate on a project, excited about the combination of the freewheeling form of El Solitario’s builds and the rigid adherence to design regulations that Urban Motor specialize in. “We were only missing the link,” David says, “one man crazy enough to pick up this endeavour.” A year passed before he took a call from Urban Motor saying they found a client, a very excited German professor named Raoul. El Solitario gave him a call. “You should have heard his excitement about this project. Seriously, it was a magic moment, one of those unforgettable situations in which the stars align.” Two more months passed while the team at Urban Motor lead the project and built up a road compliant, reliable old airhead in Germany, a task the team at El Solitario weren’t too keen on doing themselves. “To be a good mechanic you need to be stoic and disciplined, two qualities that I really lack,” David explains. “I’m always dreaming of the next big thing and have difficulties concentrating on what’s already due… or even following the execution of something that we have planned.” So the distinctive, conceptual parts of the build were left to the etheric team in Spain. And the first thing they wanted was to name the bike. Raoul’s bike build was occurring during a pretty stressful part of his life and the team drew on the challenges he was facing for inspiration. “The Archangel Gabriel came to my head and I immediately realized we were onto something precious,” David says. “Gabriel was God’s messenger. Although an Archangel he still offers guidance and aid whenever you ask for it.” Fair enough. With language like that, it’s no surprise that the finish on the bobber isn’t exactly typical of a Bavarian custom. The tank, which cleverly hides the master cylinder, is etched with the wings of the archangel, with a healthy reminder on top to not “ride faster than your angel can fly”. This might actually be tricky on Gabriel, with the stripped back Beemer tipping the scales at only 180kg, fully fuelled. The bike is beautifully distinctive and one that Urban Motor and El Solitario are justifiably proud of, with its Teutonic adherence to design regulations masked by the art that the Spanish have languished on it. And David loved the experience of building it. “I enjoyed so much working on Gabriel. With its wings and scythes it should protect our buddy Raoul through the shady roads of life.”