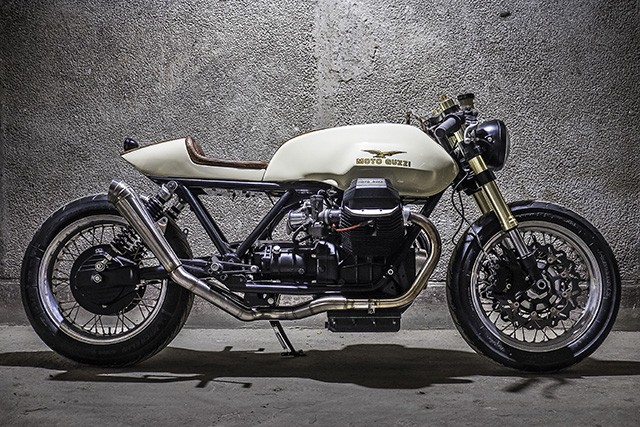 Growing up in the ’80s with a two-wheeled obsessed neighbour I’d often sit on his living room floor flipping through a giant book, the Encyclopaedia of Motorcycles. He’d encourage me to read up on BMW, ignore the “Jap Crap” and when I got to the Moto Guzzi section he’d wax lyrical as if talking about the most amazing thing on the planet. It’s easy to understand why, up until that point Guzzi had been the big daddy of the Italian Motorcycle world with production peaking in 1973 at some 50,000 units. But by the ’90s it was as low as 3,000, the mystique had been lost and most had never even heard of the marque. Now with Guzzi back in full flight many are taking the opportunity to restore the bikes of the dark days to the full glory they deserve and very few have done as good a job as Michael Lind with this creamy smooth 1984 Moto Guzzi SPII. Working out of the communal space known as Knockel Grease Garage Michael’s used this build to not only create a brilliant bike of his own but to also expand his knowledge and surround himself with a group of like minded individuals who all love to make motorcycle magic. Before he began the build Michael had always thought of Guzzi’s as small bikes with “bicycle wheels”, but the old wreck of an SPII he picked up was anything but! A double cradle steel tube frame is no lightweight and neither is the shaft driven old tech V-Twin so to get things going it was a case of unbolting absolutely everything he wasn’t going to need. With the surplus parts removed it was the raw frame that revealed to him a vision of a lighter, more svelte Italian with “modern features and my personality”. So out came the grinder and all the tabs and brackets cut off and the subframe modified for a shorter, more abrupt rear end – thanks to the welding skills of Michaels good friend Jan Hansen. With a dramatically simplified frame setup Michael lets the body work do the talking and the reworked tank is now arrow straight and sits low enough to just clear the exposed cylinder heads. To compliment its lines a new tail section had to be fabricated with the original park bench like seat shown the door and a mix of Guzzi styled round and straight edges making for a perfect match. The subframe is cut to compliment the rise in the tail unit that is body worked to sit perfectly on the frame and butt up against the tank for a near seamless finish. With both sanded back and smoothed out it was off to see Phillip from Au2Lakering to lay down the thickened cream paint work that looks good enough to eat. He also took the time to painstakingly apply the Moto Guzzi logo in gold, resplendent with the original Eagle that has been part of the branding since the day the factory door opened in Mandello del Lario in 1921. To offset the cream bodywork Michael looked to another classic Guzzi trait and entrusted the job of the leather work to Kristoffer Emborg, known for adding a classic touch to even the most modern ride. The seat pan was formed and then covered in just enough foam to keep things comfortable before the rough dark brown leather was applied for a vintage look. Using the same material a mock tank strap has also been laid down that neatly navigates the fuel cap with the look extended rearward over the tail for a totally uniform look front to back. Despite the quest for modern riding features it was important to Michael that the look maintained a classic continunity and so the Guzzi ’80s headlight was assigned to the dumpster a Triumph unit was wired in place for a neat cafe racer touch. All of which is accentuated by the mountains of negative space underneath and around the seat that give a lighter visual feel and do away with the less than pleasant factory side covers. That space also allows the thumping 949cc Italian twin to take pride of place, there is no doubt it’s OHV old school tech, but with a bore and stroke ratio like a NASCAR engine it’ll rev hard and has mountains of torque from take off to redline. Pulled from the frame, the engine and drivetrain was all painted in black with the exception of the front cover and aftermarket head guards from Jens at Guzzi Parts. Knowing he was going to replace the stock exhaust Michael was encouraged by Maki Saito to swap the standard 30mm carburettors for a pair of big breathing 36mm Dell’Orto’s capable of really making the big Guzzi sing. Aluminium velocity stacks give the outside a racey touch with a lightened flywheel and race pack clutch doing the same on the inside. With the engine in place the exhaust was fabricated with the stock headers feeding back to custom built pipes that merge under the seat in the famous X-pipe configuration. Particularly beneficial to maintaining gas flow in V configuration engines they exit out each side with GP style mufflers that give the thumping twin a seriously rorty sound. With less weight and more power it was time for Michael to start adding some of the modern features he’d envisioned before the build commenced and nothing says new tech on old school like a set of upside down forks. To make the modern suspension work on the old frame a set of custom triple trees was fabricated utilising the stock stem for perfect fitment. The added bonus of buying a complete front end for the conversion is the benefit of modern braking technology and 4 pot calipers now clamp thumping twin 310mm rotors in a wave pattern design. But the new axle of such suspension is never going to work with ’80s wheels short of needless changes so the hubs were customised to accept spokes front and rear before being laced up to 17 inch rims; 3.5 wide at the pointy end and a meaty 5.5inches at the rear wrapped in Bridgestone rubber. To ensure the geometry was right for high speed cornering and stability the rear needed to come closer to terra firma and a modified stock swing arm works with new adjustable progressive rate coil-over shocks to get it just right. The big wide bars of the original model have been ditched in favour of a set of clip-ons, which look remarkably bare with just the mandatory levers fitted up. In his pursuit of a clean look Michael went the extra mile and not only rewired the entire bike, hid the battery in the tail but also relocated all the switches to under the seat. With new aftermarket rearsets in frame matching black the end result is a stunning Guzzi with all the visual appeal of the golden era and modern mechanicals for a no compromises riding experience. Michael is rightfully proud looking at his SPII, “I Love It” and admits he couldn’t have done it without the help of his friends already mentioned as well as Nikolej and Lars. We learn a lot from those around us, they teach us and help shape many of the directions we take. Guided by his passion and a little help from his friends, Michael ended up with the bike of his dreams and as for my old neighbour, well he never got a Guzzi quite like this Danish delight but he did turn a bit Japanese and now rides a Suzuki K7.