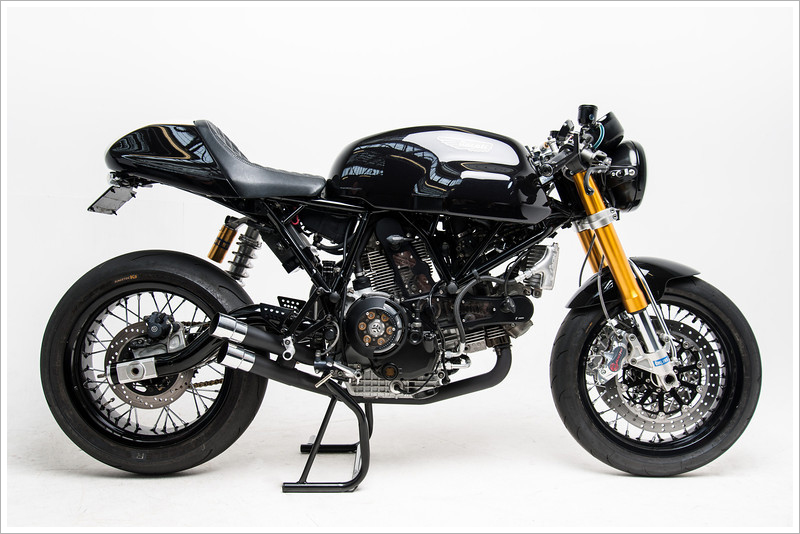 What’s better than a Ducati Sport Classic 1000? A Ducati Sport Classic built by an ex World Super Bike/Moto GP mechanic. It doesn’t get much better than that. This machine has an amazing mix of aesthetics and power that just whispers seductively in your ear: ‘look at me’. Over 10 years experience on the European racing scene, including some time at the Ducati factory, has culminated in today’s feature bike: Corse Motorcycles‘ rework of the 2006 Ducati Sport Classic. Opened in 2012, Corse Motorcycles is the baby of Anthony Warnock, a well travelled mechanic who specialises in late model Ducatis. According to Anthony: ”I was lucky – I went to the UK to study motorcycle engineering for one year, that turned into two and then I got the opportunity to work in British Superbikes, after a short term at Warrs Harley Davidson in London. Then it just kept getting better and better”. After his time in Europe was over, Anthony returned to his home town of Perth, in Western Australia, and after a few luckless job changes, took the plunge of starting his own business. And that is how Corse Motorcycles came into being. One of Anthony’s customers, and now friend, is Nat Graham-Helwig. A late model, fast bike aficionado who has an eye for detail, and the right mechanic in Anthony to help him transform the stock Sport Classic into something unique. Six months of discussion as to the desired look, meant a few changes during the course of the build. For instance, three seats and four sets of handlebars were tried before settling on a choice of what adorns the bike today. Utilising the factory fuel tank and rear cowl, they both sport a two tone paintjob, with gold pinstripe. A Wasp tail tidy sits under the ducktail, flanked by Rizoma indicators. The seat that was finally chosen is finished in diamond quill design with white stitching. Keeping with the ‘look at me’ styling are the Rizoma billet timing covers with Perspex windows, showcasing the EVR clutch componentry. The power output for the bike has been bumped up as well, the Italian powerplant treated to a Wasp power up kit, along with twin K & N filters and a Power Commander. The engine is held together using a Pro Bolt engine fastener kit. Power is shot to the back wheel from a 14 tooth sprocket through a 520 chain, protected by a Speedy Moto sprocket cover. Sitting in place of the sky cannon stick exhaust, sits a Moto Creations shotgun exhaust. The final choice in bars ended being Woodcraft clip-ons, mounted along with Brembo RCS brake and clutch master cylinders. Hydraulic connection from the cylinders are through a Goodrich brake and clutch line kit. The headlight and instruments have been treated to powder coating. From a standard Sport Classic, to the bike you see before you today, you can see where years of experience have helped in the build. A rather sporting orientated bike that wouldn’t look out of place at a local bike show, according to Anthony ”it’s subtle but unique, sounds and rides beautiful and draws a crowd where ever it’s parked.” Couldn’t have put it better myself.