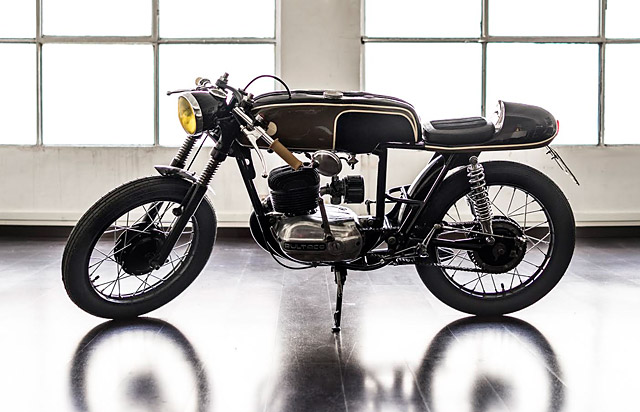 Sure, café racers are great. But you can’t deny that they are also very, well, they are very British. Not that there’s anything wrong with that; some of our best friends are English. But what if you wanted to build a bike that was true to your own roots, and not those of some leather-clad Pommies who lived a world away and an age ago? What if you wanted to take the essence of the scene and then put your own spin on things? If you were from sunny España, you’d start with a Bultaco, add a cup of café solo and maybe go for a little raza around the autopista. Which coincidentally is exactly what Bacelona’s Gas Department has just done. And they’ve also created a bike which we think is probably the best-looking Bultaco we’ve ever seen. Here’s their ‘Summer Night’ café racer. “Most people look and don’t see,” says The Gas Department’s Dani Ebo. “They restrict their view to the fashionable image, the trending topic, the easy initial impression and the first glance. Here at Gas Department, we want to feel our work, respect the origins, improve the past, open up a new path and bring back to life the heritage from our projects.” These fine Spanish lads say that they had always wanted to design something like this – some streamlined beauty to portray their history and the passion for motorcycles they experienced from their youth and their parents. “We hunted for a motorcycle capable to represent us. Since we live in Barcelona, Spain, an original Bultaco would do the trick. Bultaco was founded in Barcelona in 1958, and they produced several models until 1983. Mostly known by their off-road machines, there were a few sport models and even several racing world championships.” Low and behold, they found this 1964 Bultaco Mercurio 155 at a friend’s garage. Some searching, pictures, Photoshop and a few beers later, the final design was done. Once they had it on the lift at the workshop, they realised that there wasn’t too many parts that would need to be made or found to get what they wanted out of the bike.

“The main lines of our design resembled a lot those from the most famous Bultaco, the Tralla, and one of its racing versions, the Tralla Super Sport, or TSS. In order to embody the spirit of this bike, we decided to replace the gas tank with one from the old TSS racing bike and surround the tail section within a bespoke rear cowl made a little more rounded than the TSS original.” “As we didn’t want to spoil the round shape of the tail, nor the flowing looks of the whole tank-tail combination, the rear light was deeply sunk into the rear cowl. The extra long tank is held in place thanks to a gorgeous leather belt. Made out from the same leather used for the seat, it is directly bolted to the frame just in front and behind the tank. Xtrim Seats manufactured both the seat and the leather belt for the tank.” It goes without saying that the new single-seater needed a nice, new pair of racing footrests. Surprisingly, these were made from Yamaha R1 stock parts, but with new bearings and fancy stainless levers added. This achieved that light racing look without losing the old-time appeal the boys were after. The exhaust had to be shorter too, but all the internals were saved and fitted to the shortened can so as not to alter the bike’s rather sweet two-stroke performance. Being an old smoker, the engine took a lot of reconditioning work; inside it was fitted with new bearings, gaskets and rings. Outside it was blasted, polished, and also painted. The brakes remain unaltered though thoroughly refreshed. A similar treatment was given to the front forks, which now have their lovely springs on display. The rear shocks come from a Virago cruiser; they had the exact height needed, plus they provided a great improvement in the bike’s roadholding.

Then the only task left was the paint. Once cut and polished, the chosen colour gently recalls the 60’s, but the subtle pin-striping also manages to add some unexpected pep and sprite to the bike’s tobacco brown retro-ness. Lovely.