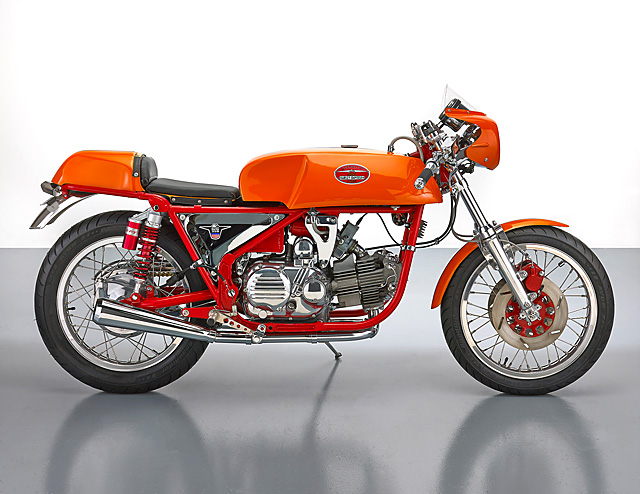 When it comes to the history of motorcycles, you’d have to admit that sometimes the more esoteric the bike is, the more interesting it becomes. For all the Yamahas, Ducatis and Hondas you have running round out there, there are untold thousands of Francis Barnetts, Fabrique Nationale d’Herstals, Rupps, NSUs and Flying Merkels that have fallen by the wayside. Hell, even Triumph Motorcycles almost went the same way. And for each of these ghosts of the civil dead, there lies story upon story of genius engineering, wild successes and miserable, business-ending failures. The partnership between Harley Davidson and Aermacchi in the ‘60s and ‘70s is one such story. The silver lining here is that both companies continued on and still exist today, in one form or another. So, like a phoenix from a engine foundry’s ashes, today’s bike is here to remind us of what once was, and what could have been. Here’s Scott Brown and his beautiful Aermacchi Harley 350SX. With the post-war Japanese motorcycle invasion looming large on the US horizon in the late 50s, Harley Davidson was looking for an entry-level bike to market as a means of defending their turf. So in 1960 they bought a 50% share of the Aermacchi Company. It was an Italian aircraft company that, like many in post-war Europe, looked to motorcycles sales to cushion the abrupt drop in military spending. Interestingly, the company still produced military training jets up until very recently. The co-branded ‘Sprint’ line of bikes were made until 1978, when Harley bailed on the partnership and sold Aermacchi to Cagiva. “I had destroyed just about
everything in his garage and I was
eyeballing his much cherished
Mercury outboards.”

“At about the age of 12, I had discovered my Grandfather’s tool boxes, and I proceeded to disassemble anything in sight,” says Scott. “I had destroyed just about everything in his garage, and all the time I was eyeballing his much cherished Mercury outboards. Needless to say, I was grounded from the wrenches soon after. Then, shortly after my banishment from the tool box, I was surprised to see him pull into the driveway with an Aermacchi basket case in tow. His instructions where clear, ‘wrench away to your heart’s content, just don’t touch my Mercury.’” The bike you see here is the result of what Scott created from another Aermacchi basket case that he purchased in the Autumn of 2014. Seeing it in all its rusty glory at a local swap meet, he found himself driving home with a ’73 350SX Enduro – Aermacchi’s US dirt bike model. Always wanting to build a Sprint cafe racer, Scott snapped up the bike then spent countless hours searching the internet, changing out the SX parts for SS items (the 350SS was the road-going version of the same bike) and fabricating just about everything else.

As you can see, theis all went pretty damn well. This was no doubt aided by Scott’s dedication to going over every single nut & bolt on the bike, which really made the countless hours pay off. We think the results speak for themselves. It’s interesting to note that 1973 & 1974 were the only years that featured this double looped frame and the ‘knucklehead’ style motor. The fairing is from the ’60s, but Scott’s cleverly custom fitted it with a contemporary headlight and neat little LED turn signals. The front fender came from England’s renown Rickman Motorcycles. Scott then scored a Rickman vintage racing tank and modified it to fit perfectly with the seat and side covers. Looking at the tank decal colors, you can see how he’s really thought through the entire build’s colour scheme. He also fabricated the fender bracket, hand laced the 18″ rims and made the Yamaha forks & dual disc setup work perfectly in its new Italo-American home.

Clearly it will stop, corner and handle way better than the original setup. Scott also fabricated the triple tree, along with the new LED instrument panel and tach mount. Along with the clip-on bars and fairing, this build really reflects the proud heritage of Aermacchi racing. After getting the motor back from one of the few remaining guys that knows everything about rebuilding these petite 4-strokers, Scott committed himself to the many, many hours of polishing required to get a bike looking this good. He also fabricated the brake lever and did all custom electrical work. Note the new electric starter mounted above the cases in the above shots; the factory starters never worked very well, but he found an aftermarket one that isn’t too bad at all. God bless the internet! We’ll let Scott finish with this little bucket list gem. “I have fulfilled a dream of mine with the completion of this bike. The combination of the American & Harley, the Italian & Aermacchi, the English & Rickman and the Japanese & Yamaha make this bike very special to me. I sure wish I could show my Grandpa what I turned that dream he gave me years ago in to. He probably would say ‘yep, it’s great – but you can still keep yours hands off my Mercury!’”