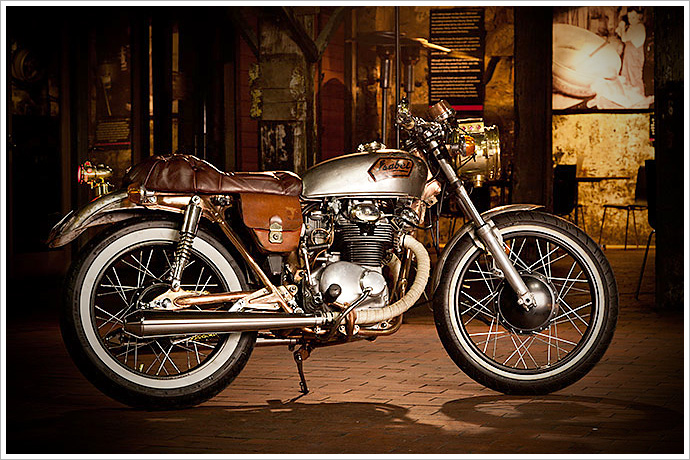 Ahhh, steampunk! How I love thee. Let me count the ways. Lighter-than-air warships. Wind-up robots that make cool whirring sounds. Weaponised steam locomotives. Vast subterranean cities built by armies of leather-goggled minions. Gunpowder-driven external combustion engines driving giant tanks. Analogue push-button typewriter computers cooled by water and made of brass. Soldiers driven by steam boilers and programmed by punch cards. Giant steel submarines filled with grand copper organs and suspended walkways and stained glass portholes and rivets. And, well, that would have been about it for my personal steampunk list of coolness if you had asked me last night. But tonight it’s different. See, my imagination has just been expanded by exactly one hyper-cool machine, but this one’s not a special effect or a pen and ink drawing. It’s as real as you or I. Her name is Isabel and she’s the product of one particularly over-active imagination that lives inside the head of Tasmanian Andrew Knott. Here’s Andrew. “I’m a 33 year old graphic designer and photographer, only been riding about 4 years, but have taken to it like a duck to water. Prior to Isabel I had (and still have) a BMW R1200GSA which I love, and is great for touring and two-up stuff, but isn’t really suited to the amount of just around town riding I do, so I figured I might just get a fixer-upper for a runabout bike, get me to the shops and back and teach me about the basics of bike mechanics. Now I wouldn’t really want to take her into town and leave her anywhere – so I still have no knockabout bike.” “I’ve really dug the retro cool vibe that has snuck in to the world over the last few years, and mostly the REALLY-retro Victorian-inspired stuff. So I decided if I was going to do a custom old bike, let’s make it properly old! It also afforded me a bit of leeway in the customising department, as I’m no mechanic, or metal-worker, so if I went with the idea it was to look all old, knocked about and ‘hand-made’ then all those little imperfections that it was sure to have would add to the character.”

“I found an old 1973 CB250 that had a 350 engine it that was for sale locally, just a really neglected old Frankenstein bike that I figured would be perfect for my needs, simple, common, easy to find parts and knowledge for and reliable. It didn’t run, wasn’t registered and was painted purple… with really horrible girl’s push bike kind of handle bars. Took her home, stripped her down and started from scratch. Turned out the engine was mechanically in good nick, had good compression and I just needed to rebuild the clutch.” “So I kicked off with the gauges. I wanted to get them just right for the vibe I was going, and then basically build the bike around them. I copper-plated the housings, designed the faces and got them etched out of brass, and replaced the needles with old clock hands. It worked for me, and the rest of the bike flowed from there.”

“I knew I wanted to have a old carbide lamp housing for the headlight, I’d seen it done on a chopper ages ago and really liked the idea. So I tracked down an early 1900s carbide lamp on Ebay that was useless as an actual carbide lamp but perfect for a housing. And the originally headlight went in almost perfectly! And it kind of went that way for the whole build, everything just seemed to work.” Technically, you’re only breaking the speed limit in ancient Rome

“So then I got the whole frame copper-plated. Still makes me laugh to this day. Sending a sand-blasted frame off and and having it come back in shiny, shiny copper just made me giggle. Though it was way too shiny, but it turns out if you spray copper with a vinegar/salt solution you can make it look almost like the statue of liberty in about an hour… so with a bit of that and then some polishing back it started to look the right age.”

“I ground the tank and guards back to bare metal and clear coated them with some clear engine enamel which I then baked in my oven (much to my girlfriend’s displeasure). They had some great scars too, really fit in well with the rest of the bike’s character. I wanted to have all the materials as honest as possible, very little paint if I could help it or only if it made aesthetic sense.” “The bike didn’t have any airbox covers when I bought it, and they are quite rare now, so I figured why not make some little leather saddle-bag covers. I found an old leather satchel at the tip, pulled it to pieces, cut it in half and they worked a treat. Found some old typewriter keys that I replaced the control switches with, some brass cable adjusters, a clock key for the trip meter reset, brass hand grips and got a few other bits brass plated – a rare thing these days apparently!” “Got quite a few great ideas and help from a few forums too. Someone posted up a great old bike than had all it’s fuel lines done in copper tubing, which i loved, but didn’t know how I’d be able to do. I tracked down some 1/8″ copper tube and formed it around in the shapes I was after using a champagne bottle and it was actually stupidly easy.” Again with the scotch

“There was no question that the seat had to be done up like a Chesterfield, and I figured it wouldn’t be too hard to find someone to do it for me – but it turns out if you ask a motor upholsterer to do diamond tufting they say it’s a furniture upholsterer’s technique, and you ask a furniture guy to do a motorbike seat they just look at you like you’re an idiot. So the only option was to do it myself! A few Youtube tutorials, some damn nice leather from Sydney, a few more scotches, I had a Chesterfield seat.”

“There’s still lots of little bits I’d like to do, there will always be something I reckon. The next thing to try is to do some home electroplating. There’s no one is Tasmania that does brass-plating, so I’d like to have a go at a few small parts. And the indicators are wrong, I still need to find something for those…”
Check out the complete build thread over at DoTheTon. Thanks to Jon for the tip.
Tweet
Share
WhatsApp
Pin4
4 Shares
Tweet
Share
WhatsApp
Pin4
4 Shares