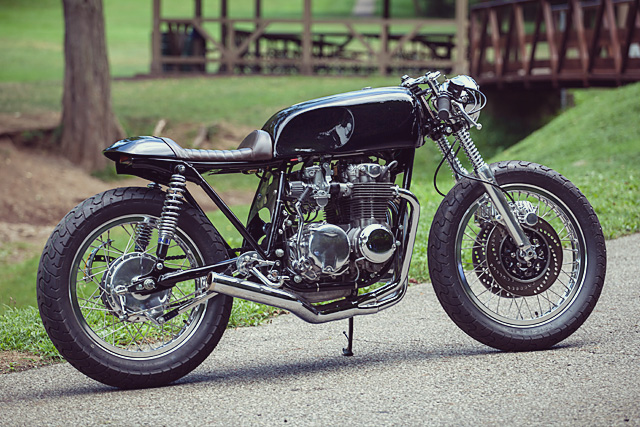 The phrase “unfinished project, 95% complete” is one you often see when trawling the internet to find an old car or bike to buy. The machine in question often looks like it’s ready to roll, comes at a bargain price and ‘how hard can that last five percent really be to finish?’ you say to yourself. Ah, the horror stories! Five percent often turns out to be closer to fifty and then there is the real zinger; those last few parts you need, they’re not available any more or “only needs a new battery to start” proves to be a full engine rebuild, wiring nightmare or both. Even complete show bikes that appear in magazines are passed off this way – but that’s where Kott Motorcycles is different. Dustin spends just as much time restoring his builds to perfection as he does customising them and this slick as black ice ‘75 CB550 is no different. The man behind Kott Motorcycles explains, “The most difficult aspect of building a vintage motorcycle is the restorative process. Years of neglect and mechanical fatigue can create problematic troubleshooting scenarios, unusable parts due to damage or wear and extensive costs concerning replacements. The bikes that are built in my shop are certainly equal parts restoration and customization but I think the restorative process is often overlooked when considering the finished build.” The ’70s range of CB Honda’s is a truly mixed bag; the styling was often similar to give cheap, small capacity bikes, the big dollar look. But capacity alone didn’t tell the whole story and while the CB550 is certainly the middle child to the big daddy 750 model it has plenty going in its favour. “Still equipped with enough motor to get the rider both in and out of trouble, the enjoyable ride quality that the 550 promotes lends itself very well to a Downtown lane splitting motorcycle. With a few subtle changes I believe we were able to alleviate the anaemic proportions of the stock machine while introducing timeless design queues from other legendary motorcycles.” Which is exactly what a CB550 deserves, a classic super sport machine given a Kott premium finish. The standard frame has been cut back, not only reducing the unsightly rear overhang but giving the machine more sporty proportions. Ground, sanded and smoothed the frame finished out in black defies the cheap, $1000 purchase price it commanded in its day. But as good as the frame and swingarm restoration is it merely provides a base for the incredible metal work that Kott has become known for. The tank has been swapped out for a CB750SS unit of the same vintage and the transformation it gives its little brother is remarkable. Functional and friendly Japanese lines morph into European exotica. Which is in no small part due to the many hours of hands on work that Kott has spent on the item. The knee dents are uniform and perfect in their lines and proportions. While the tanks metal is straighter than the day it left the factory and sits perfectly over the frame. To complement the change where a once gaudy two-up seat once sat is now another Kott metal work masterpiece. The hand formed steel tail section and seat pan are minimal and yet flawless in their execution. There is no endless layers of bondo here, just old-fashioned craftsmanship that’s about doing things right. Topped with a seat stitched from oak brown distressed leather it creates a tasteful antiquated feel. But on this build it is pretty hard to avoid that thick, glossy and brilliant black paint. There is a depth to the finish that instantly takes you back to times when manufacturers weren’t trying to cut corners on cost. Now paint is sprayed on sparingly and you can almost wipe it off, but deep British black gives the CB550 a level of class it has no right to have. “To further the subtlety of the design inspiration, a black Kott decal was captured beneath the thick clear coat of the gloss black paint to create a unique redundant effect.” But nothing sets off black in a classic fashion like chrome done just right. But rather than just splash it around on fenders and tacky trinkets, Kott found a better way. “The most challenging aspect of the build was the front end modification. Custom machined spring retainers were designed in order to expose the front suspension springs. The classic look was inspired by the infamous Norton Manx race machines.” A set of CB350 twin springs were chromed and an ABS spacer machined to prevent contact between the spring and the triple clamp. “The aluminium cup was designed to promote a seamless flow from the fork slider to the cup itself.” The end result is incredible; a fully functional and reliable Honda telescopic fork setup with the look that comes from only the most exclusive vintage motorcycles. With the upper clamp polished and the lower clamp finished in black, along with a polished brake caliper, the contrast in the two distinct finishes is perfectly weighted.

Out back a set of quality Hagon shocks gives a matching look, black in colour with chrome progressive springs. “Excel shouldered aluminium wheels were re-laced with stainless spokes to bring a brightness and refinement to the bottom half of the creation.” These are matched to heavily polished hubs and components for the rear brake. While the front end features a twin disc setup that has been crossed drilled in a wave pattern. Wrapping things up are a set of vintage look tyres that give the period appearance without compromising performance. That get up and go comes courtesy of the brilliantly restored 544cc, two valve Honda four engine that would spin up like a maniac for its day. Like a true super sport it revs and does it quickly, not providing the full grunt of its big brother, but more than enough to put a smile on your face. Externally the engine is a mix of incredibly polished parts and side covers and highly detailed alloy. The bank of four Keihin carbs now breathes effortlessly through a set of pod filters. But any time you look at that engine it’s impossible not to be blown away by the stunning four into one exhaust.

Having put so much effort into building such a high level machine, Kott as he does on all his builds, uses only the bare essential accessories. But just like the rest of his work it’s incredible; the pegs that are a mix of custom parts and re-purposed original items are as good as it gets in the industry. While the new clip-ons wear only what you need for a day of canyon carving, classic grips, mint levers and an era correct master cylinder. “My favourite part of the build was the fact that this was the second Kott custom motorcycle ordered from the same client. A unique motorcycle entrusted to a capable, caring and discerning customer.” Which is proof positive that things aren’t done to 95% at Kott Motorcycles; whether it’s the restoration, running or customisation it’s all done to the highest of standards. It’s why Dustin Kott has become such a heavily respected builder in the game and with results like this, who can argue.