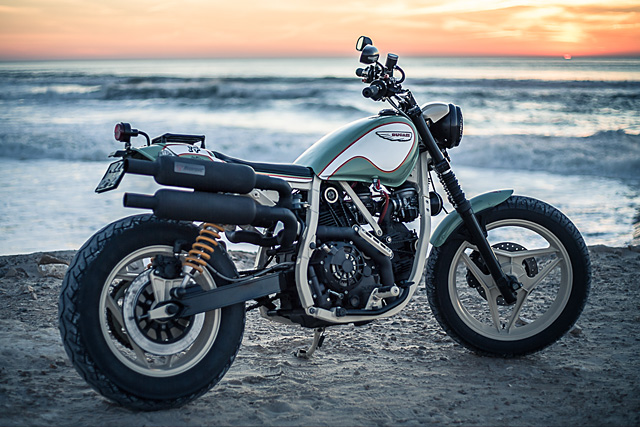 Under the guidance of engineer João Barranca, Portuguese motorcycle company Redonda is split into three divisions. The first is Redonda racing, specializing in road and off-road race bikes, Eco-Redonda, which concentrates on customizing electric cycles and Redonda motors – heavily modified motorcycles that can be ridden every day. The last collection produced this Ducati Indiana scrambler – a distinctively beautiful take on an often forgotten Italian cruiser.

Don’t feel bad if you haven’t heard of the Ducati Indiana – not many people have. In many ways it was a Cagiva rebranded in a spectacularly unsuccessful tilt at the American market. It can all be linked back to the late 1970’s when Ducati was haemorrhaging cash, partially due to the inaccessibility of their marque bikes and partially due to their production line alternating between ‘artisanal’ and ‘sheltered workshop’. The majority shareholder in the company, the Italian government, was keen to offload the brand and failing that, more than willing to shut it down completely. And there’s no better way to know you’re stuffed financially when even the Italian government is ready to pull the pin. Thankfully, another Italian firm came to the rescue – Cagiva. Only a new company itself, Cagiva was producing small-displacement two stroke motorcycles in the thousands. Looking to expand into the higher capacity market they purchased Ducati in 1985 and rushed to release their own motorcycles powered by the gorgeous Pantah engine. Cagiva had already been making bikes around the Pantah powerplant, namely the off-road Elefant and the street-focused Alazzurra, but in 1986 Cagiva released a new cruiser under the Ducati banner – the Indiana. Naming a cruiser after a conservative US state that forbids alcohol sales on a Sunday is a curious choice in retrospect, but the cruiser scene of the 1980s was vastly different to that of today. With less emphasis on ostentatious displays of wealth and chest-beating scowls of tired masculinity cruisers still attempted to keep their weight below aircraft-carrier levels and cornering was still considered important. Despite this, compared to bikes like the Honda Magna and Yamaha XV700, the Indiana was as spindly and awkward looking as a teenage athlete. It didn’t sell well (less than 300 units were sold in the US) and was quickly forgotten, but not by the guys at Redonda who took this curious bit of Ducati history and turned it into a distinctive street tracker. João and his team were fans of the Indiana, believing it to be a great combination of a performance engine in a traditional frame. The prior owner of this particular bike loathed to part with it, and only sold it to Redonda because he thought that they’d take care of the motorcycle and do a good job converting it into something a little more special. He was right. To force more air into the cylinders the Bing carburetors were moved to the front of the barrels, making the most of the air induction. The belt covers were removed and the clutch cover lightened to show off as much of the working parts as possible. An oil cooler was mounted to the rear left hand side of the bike in an effort to keep engine temperatures down. At the front end, a radial master cylinder was mounted from a GSXR and between the standard forks sits a Harley Sportster headlight. It runs Öhlins shocks on the rear and the high mounted exhausts are stainless steel, running into Akrapovic mufflers. To top it all off the paint scheme is an unusual mix of a pale green on an off-white frame. It’s leaner and stripped back but with just the right amount of added on parts that complement the lines of the standard Indiana rather than completely change it. As such it doesn’t fit firmly into the tracker category – the high mounted exhaust points in that direction but it isn’t an out-and-out dirt tracker. And there are quite a few nice details on the bike too – I especially like the red that runs lightly through the paintwork and is matched to the spark plug leads and fuel line. Redonda have taken a curious Ducati and turned it into an appealing special. The workmanship is great and importantly, the colours are a welcome change from the usual palette that we often see on the bike scene. It’s exactly the kind of build that will have the few Indiana owners out there trudging down to their garage to pull a sheet off their long-neglected rides and take a closer look at the beautiful, capable bike that lies within.