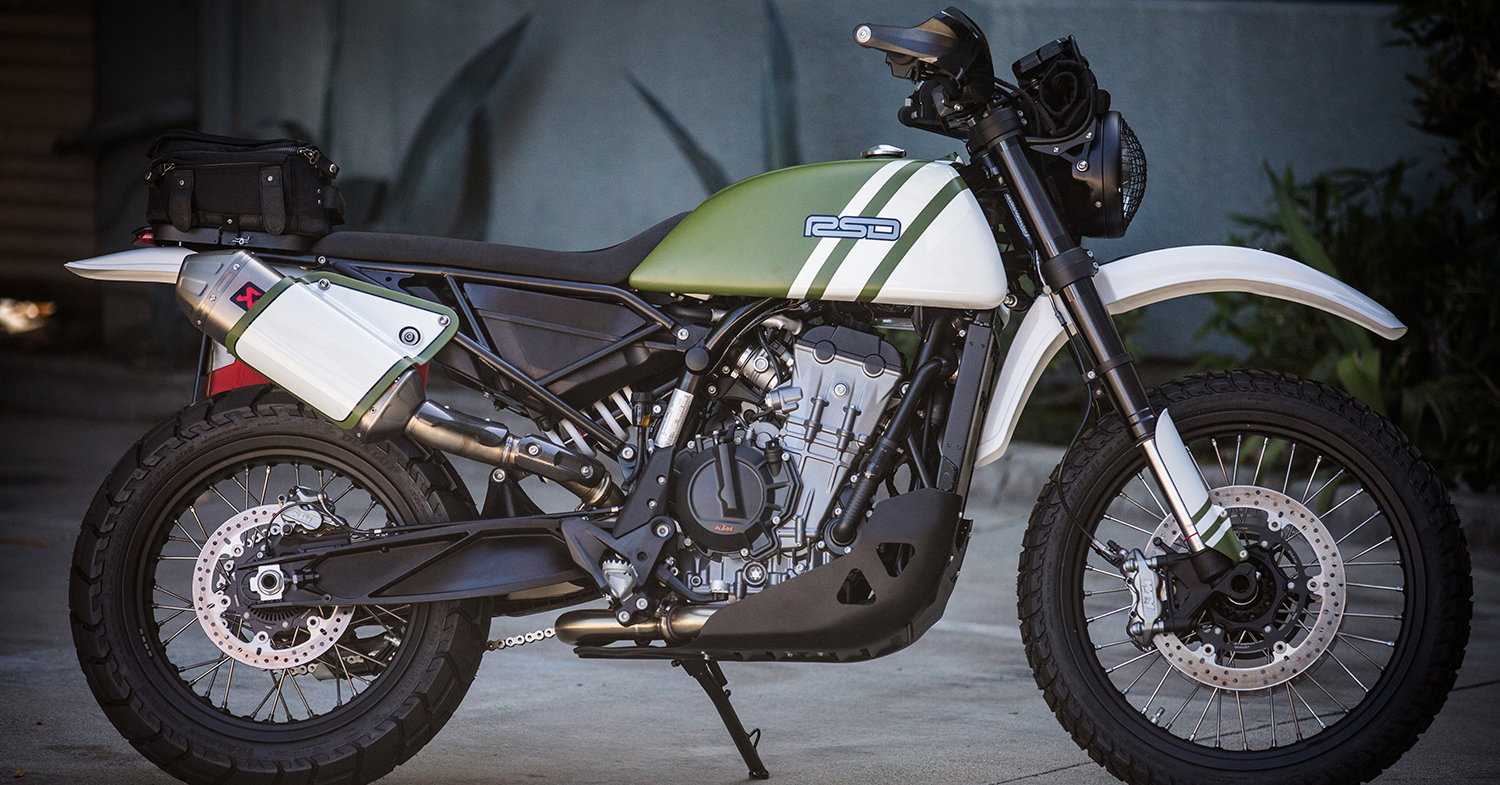 There is no doubt that KTM makes a hell of a motorcycle and their almost instant success in MotoGP is proof positive of the Austrian company’s engineering prowess. But the styling of their bikes is a love or hate affair and unless your favourite colour is orange then their paint schemes won’t do much for you either.

Enter Roland Sands, a man who has built more custom bikes than most people have had hot dinners and along with his team at RSD can transform any bike you can name into a custom style only limited by their vast imaginations. So presented with a 2019 KTM 790 Adventure they’ve harnessed the modern technology and wrapped it in a classic custom style to reveal a bike called ‘Urban Assault’.

Looking at the spec sheet of the 790 Adventure you start to wonder how KTM offers a bike so packed with technology and go fast goodies for such a price. From the all new chassis designed with the help of their Red Bull backed rally team, to the stonking twin-cylinder engine, class-leading WP suspension and an electronics package that features everything from multiple rider modes to cornering ABS. Stacked against the competition it’s hard to see why you’d choose anything else. That is unless you’re one of many who isn’t too fond of the styling.

That’s the position a friend of Roland Sands Design found himself in, the solution, roll a brand new bike into the RSD workshop and let the boys go to work! “As with any modern build, the technology is amazing but also a nightmare when it comes to customising. But we are gluttons for a challenge, so we started with the hard stuff!” The most complicated of those tasks was the adaptation of a new fuel tank, having decided to use a leftover Suzuki GT750 unit that was in the shop after the crew had built Travis Pastrana a triple-cylinder two-stroke dirt track racer, as you do!

With the bottom cut out of the tank, fabricator Aaron Boss worked his magic, creating a lower skin that looks like a prism weaving its way across all manner of modern components to squeeze the last drop of fuel capacity out and still retain the factory pump and components. The result is brilliant and from here the design could flow to the rest of the bike. Having taken the look back in time, a Vintage KTM plastic front fender with a custom fabricated steel brace was the next addition. With the same treatment given to the rear end, a look that will tug at the heartstrings of VMX fans.

To get the slim lines flowing rearward, a new steel subframe was fabricated that gets the mix between form and function just right. Diving into their bag of tricks the next move was another smart one, the use of a Husqvarna Vitpilen seat. That factory looking finish continues on to the bag rack at the rear, allowing the rider to take the essential adventure kit with them in the Burly tank bag. But the custom kings were back to their clever work with a steel number board on one side that flows over the muffler and additional fuel courtesy of a Rotopax 1gallon cell with LOX pack mount on the other.

You don’t want to be out in the wild without the ability to mend a breakdown, so a Burly Brand Tool Roll is added at the front sitting on a custom fabricated holder that doubles as a dash mount. Below a Triumph single headlight keeps the classic theme flowing and the custom grille keeps the rocks at bay. Which you also don’t want crashing into the engine, so the factory belly pan has been cleverly reworked to still provide full protection but follow the new slim lines. Before a pair of custom fork guards were fabricated to protect the lower legs of the trick WP suspension.

The parallel-twin engine is one of the main reasons you’d buy a 790 of any description in the first place, it’s simply sensational! Even with the restrictive factory exhaust it’s pumping out 94hp and the torque on the adventure version starts nice and low in the rev range. To fit the new lines of the bike the radiator now runs vertically and wears a neat new cover, while the header pipe is wrapped to keep the heat off that rad, and a modified Akrapovič slip-on gives the KTM a sweet sound and a few more ponies.

Giving the rider full control the Pro Taper bars are in a CR high bend that offers that little extra rise and sweep for navigating through the forest. With the factory switchgear back in place, the handguards are modified for a sleeker design. Finishing out the build is the fresh paintwork, military green and uniform white that will have punters scratching their heads as to exactly what it is without the giveaway KTM orange.

The finished product is the perfect example of combining the best of modern performance with brilliantly executed classic looks, for a bike that’s just begging to be taken on one hell of a weekend adventure!