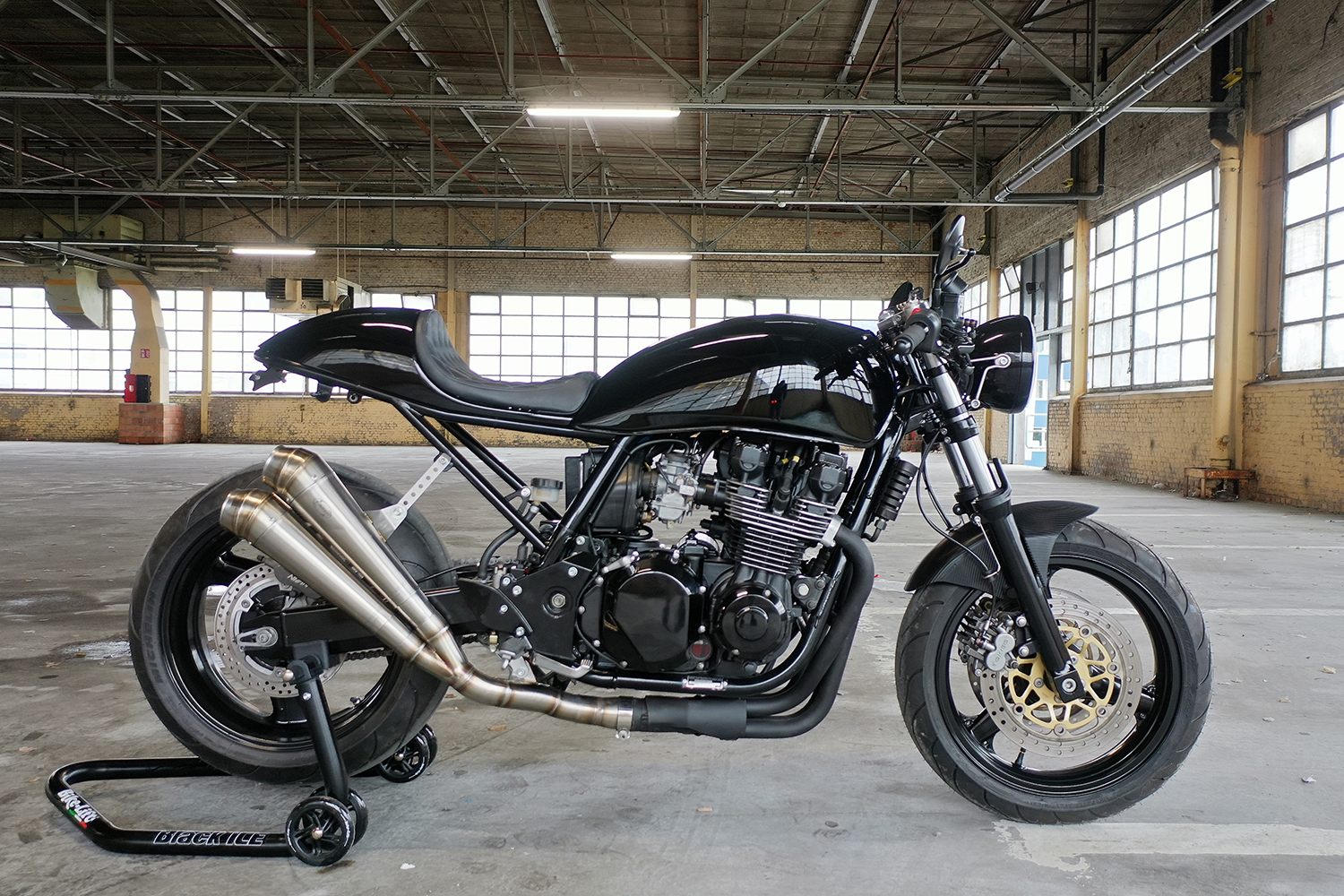 For all the complexity of the modern world and the constant rapid evolution in technology, sometimes there is no substitute for keeping things simple. The basics of good customisation have never really changed; clean design, quality components, and precision engineering. Put those three together and you’ll always have a killer ride. Which is exactly what drew a client from Germany to Belgium’s Barn Built Bikes. Having seen their work and relying on owner Sven’s decades of experience, they knew that even in uncertain times, they’d delivered exactly the bike they desired. Which is one beautiful black cafe racer, formed from the often underrated Kawasaki ZR7.

Belgium has been hit hard by COVID-19 and with one of the highest death rates in the world the country has had a truly awful start to 2020. Fulfilling his civic duty, Sven closed the doors of the Barn for two months to keep his employees and clients safe, as he bunkered down with his fellow citizens to ride out the worst of the pandemic. But things are on the improve and the boys are back at work cranking out more of their always brilliant bikes. The return to work also meant they could finish off the ZR7 for a patient client waiting eagerly across the border in Hamburg.

The design brief was fairly simple, “We agreed on a bike as black as possible. And since it’s for Germany, it has to go thru a TUV check-up. That means that the parts we used are all TUV or CE approved,” Sven explains. With the owner already being in possession of the ZR7 it was shipped to the Barn and the boys immediately began tearing into it. The engine was pulled, the swingarm and forks removed and everything stripped off leaving just the bare chassis. Then the grinder was expertly wielded like an axe to chop the entire rear subframe off, which is an ugly piece of kit with more brackets and tabs than ever seemed necessary!

With it removed, new tube was bent up to create a replacement with ultra-clean lines and the perfect hooped rear end, all in one uniform piece. With a tank change in mind, more modifications were made to the mounting hardware and the seat intersection, before the whole thing was covered in a new coat of black. Next Sven dove headfirst into his endless bag of tricks and decided to ditch the factory swingarm, with its cheap looks and step things up. The replacement comes from a high speed Honda Blackbird, superior quality, better looks, and allowing for a big fat tire.

The swingarm got the obligatory coat of black, new bushes were machined up and it was bolted into place. Now the team could get the bike into a roller and the Honda rear wheel was retained and wrapped in a thumping 190 section rear tyre. The Nissin caliper is also kept and works with a custom black braided line, with an all new rear disc and sprocket. While the rear suspension is a clever combination of combining the Uni-Track and Pro-Link systems for a plush and compliant ride. Upfront the stock components remain largely intake, albeit rebuilt to factory specs and the front wheel given some matching black.

Above that front wheel, the stock fender is the first of the bodywork to come in for an overhaul and a carbon-look cover is applied before being painted over with a hard wearing clearcoat. But the first of the big changes was Sven’s decision to ditch the sports bike inspired tank in favour of the more swooping and curvaceous lines of the older Kawasaki Zephyr. With the previous modifications to the frame made, it slots in perfectly and looks like it was always meant to be. To complement the new look a cafe racer style rear tail is topped by a perfectly upholstered seat by a new kid on the block, Atelier Lepéz.

The 738cc engine in the ZR7 is a peach, deliberately low tech, it provides the Kwaka with a rev-happy and yet torquey engine that is extremely reliable. But that doesn’t mean the old 8 valve tech can’t enjoy a performance improvement or two and to fit with the tough German laws the airbox is retained, modified and now draws air through a K&N panel filter. The exhaust is a combination effort pieced together at the Barn, with coated factory headers leading into a modified Lazer 1 into 2 back section with twin mufflers. Originally intended for a Z800, the GP styled cans hang from a minimalist brace and bark out a beautiful sound.

To finish out the build it’s nothing but quality components and a sense of minimalism to match the look. Kellermann indicators are tiny but pack a hell of a punch and the same can be said for the small battery hidden under the seat. High-end Gillies Tooling clip-ons are mounted to the forks and wear a set of LSL mirrors and refurbished switchgear. While the Daytona Velona instrument provides a touch of class and the new headlight with custom mounts finishes off the timeless look. “The Hamburg custom scenery is going to look a little bit nicer now,” Sven smiles. And with another happy customer enjoying their killer custom in the fresh European summer air, Sven’s keep it simple approach proves you don’t have to reinvent the wheel to do things just right.