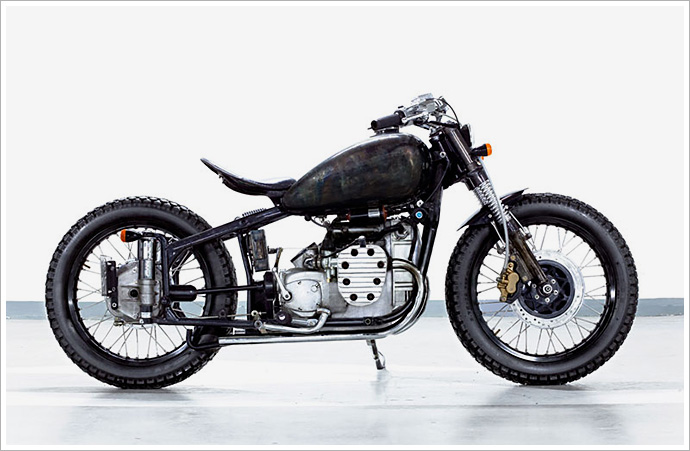 China and business. The two are inseperable – like Harley riders and pony tails, or Youtube and funny cats. And in the big, fancy pants world of business and money, when you see a hot prospect you snap it up and get on board in the hope that you can turn a relatively small investment into a big pile of cash that rains down on you like a money storm – or a “golden shower,” if you will. Now the world of custom motorbikes seldom ever sees such large amounts of money, but if it did and if this here Pipeburn blog were a strange kind of “cool bikes and how to grow your personal wealth” weird-ass hybrid website, then I’d be strongly recommending that you all buy stocks in Beijing’s Bandit 9 Customs. Believe you me, these guys are going places and the man in the director’s chair drinking the single malt and shouting at people on his phone is none other than the head-smackingly talented Daryl Villanueva. We’ve featured his great work before, and now we are very proud to exclusively reveal his second build, the stunning “Magnus”. Here’s Dazza. “A lot of people have taken notice of our first project, Loki. We received very positive and constructive feedback. Now with more experience here in China, we’re happy to present our second bike, Magnus. With this bike, I had one goal. Reinvent the Chang Jiang. The first thing to notice about Magnus is its distinct color.  Magnus wasn’t painted. I wanted to get a look no other shop could replicate. This is especially important in China. Going back to my days in art school, I remembered a trick I picked up during a sculpting class. I took a blowtorch and lit the tank, frame and fork on fire. After clearing the burnt outer layer, what was left was this organic pattern on the metal. The tank looks like a giant pebble. Putting all the pieces together, Magnus looks like it was carved from stone. It really defines the bike.” “I took a blowtorch and lit the tank,
frame and fork on fire”

“The next thing to notice is the form of the bike. Magnus is no ordinary Chang Jiang. After spending more time with CJ750’s, I found ways to reduce the weight and simplify the form. The seat doubles as the back fender and also gives the bike that swift look. The smaller custom air filter gives the bike’s profile a nice void. We brought back the shorter exhausts but this time in chrome. The twin lights unique to Magnus. I’ve never seen in it on a CJ. The exposed chrome suspension gives the bike a nice finish. I removed the speedometer from the original CJ headlight and what was left was this steampunk dial.” “Having very limited resources here in China, I had to get creative to make every inch of Magnus special. I picked up an old crankshaft and used it to redesign the gas cap. It’s really cool and builds on the steampunk look. It’s probably my favorite aspect of Magnus.” “Bandit9 faces a number of obstacles because of its geographical location. But the biggest hurdle is this idea that things that come from China are cheap, ugly and poorly made. It’s a real battle for Bandit9 to overcome this and we hope Magnus will bring Bandit9 beyond the motorcycle world and into the realm of art. Our new site is up – www.banditnine.com  – a special thanks to Niamh Daly for taking care of the site. Loki and Magnus will now officially be for sale; details on the site. I’ll be back with Bandit #3.” Dazza and the Changers. Please excuse me, I’m Australian

I was going to write a cool wrap up here, but I’m too busy talking to my trader on the phone. “Huh? What’s that? Honda stocks? Hell no! Sell, I say. SELL! And the pork belly futures, AND that dud Apple Computers stuff. What’s that? What do I want you to buy? Buy Bandit! Buy the whole goddamn lot. Thats’ right. And while you’re at it get me a single malt and let me shout at you some more.”