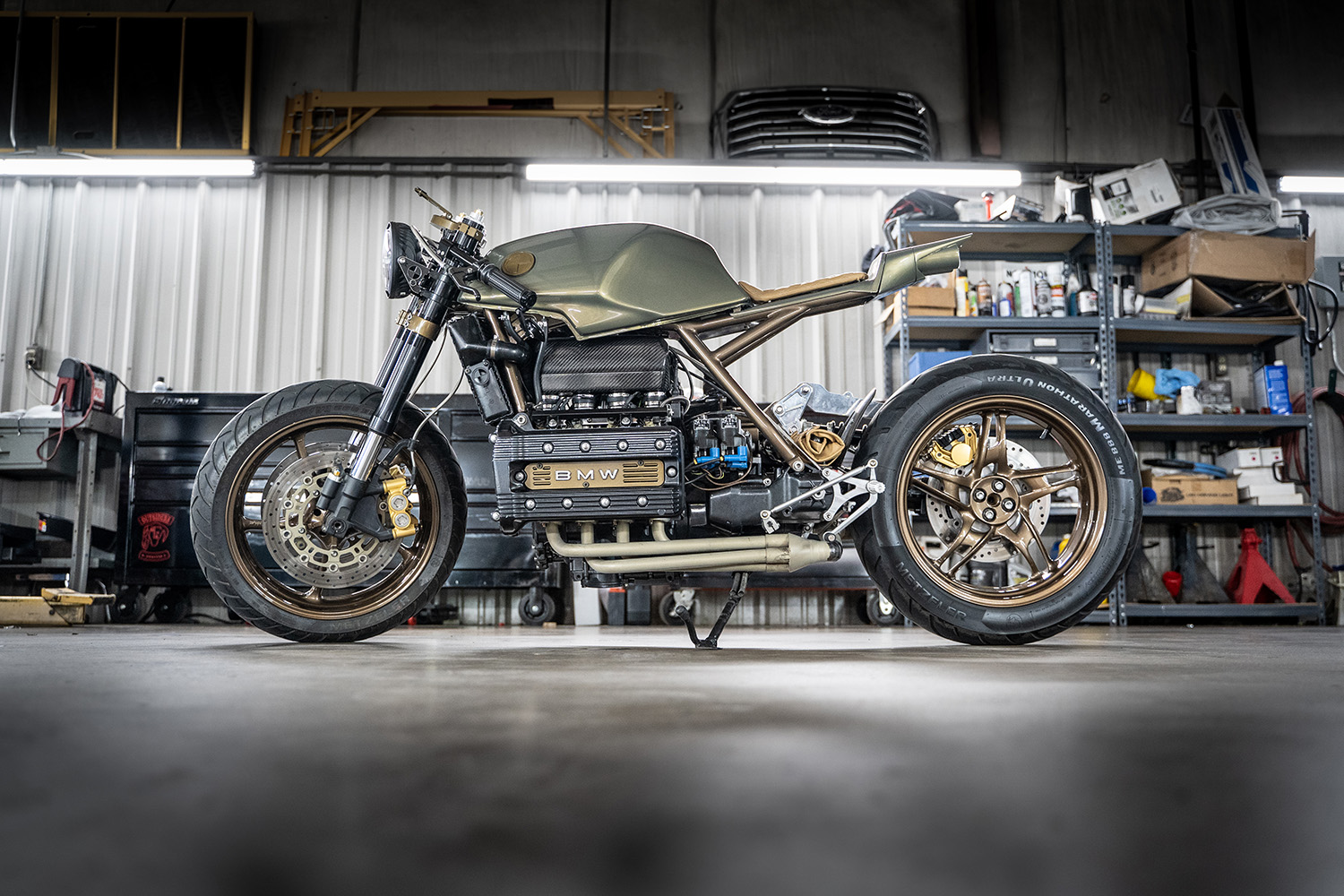 Maybe there is something in the water, a hidden venom or a secret spider, because for certain people a brand gets into their blood and there’s no letting go. Be it two wheels or four, for Ron Dey from Arkansas he’s totally obsessed with the best of Bavarian, anything BMW.

Having spent his early years in the car side of their catalogue, by the time he was finally drawn to motorcycles the K series bikes sank their teeth in hard. So much so his business is called K Bike Cafe and here into the midnight hour he builds some of the very best. His latest creation is this simply stunning 1985 K100RS that combines out of the boxing thinking with flawless execution.

With a background in the car industry, Ron worked for a company called Motorsports Authority building a host of custom cars, a few of which would be sent to SEMA each year for display. “I’ve always been into BMW’s. I still have an E46 wagon on air, an E39 M5, a 335i that’s lowered, a couple of Z3’s, a 5 series, you get the idea,” Ron laughs. On a trip to a car show he noticed some decked out Ruckus builds and trying his hand at two-wheels he was instantly catching people’s attention. Being the BMW man that he is the K series caught his eye and sitting with his friends one morning amongst the many bikes he’d already acquired, the aroma of coffee in the air, K Bike Cafe was born.

So with his other K bike builds looking on, the ’85 was undressed and taken back to its bare bones to prepare it for the onslaught of modifications to come. To get the big girl closer to terra firma the front end is totally transformed with a 2006 Yamaha R1 front end that lowers the ride height by three inches. Its fitment is made possible with a Dixer Parts top triple clamp that is also beautifully finished to accept a Motogadget speedo. With the Yamaha also donating its brake package, Ron rebuilt the calipers, fitted up a Brembo master cylinder with Messner moto fluid reservoir and connected it all up with custom brake lines by Apex.

Having used parts from Cognito Moto to get the front end to fit, Ron turned to another big name in the scene for the rear. He scrapped the entire factory setup for a Retro Rides custom polished billet rear suspension package, that not only functions brilliantly but looks a million dollars.

To get the bike dialled in a YSS shock was spec’d up to suit the exact needs of the build and its adjustability allows for extra fine-tuning. Just like the front, the rear brakes were overhauled with a rebuilt caliper, a new EBC rotor and Ron’s favourite BMW rear wheel to complete, from a K1200.

All of Ron’s bikes look simply amazing and providing the foundation of the bodywork is a switch to a K75 fuel tank. “It’s wider and has a lower profile which I prefer. I added a recessed sight glass as well since these bikes didn’t come with a gauge, only a low fuel light.” Before adding a set of trick tank emblems from Clean Customs in the UK and fitting a Power Brick gas cap. Over the modified rear frame is the first of the tailpieces, with a custom seat pan that is given extra strength and a slick aesthetic thanks to three individually sized dimple dies.

Then the rear really gets radical, with Ron after a sportsbike style look, the tail is completed with a 3D printed piece to house the brake lights that is truly a one off creation. Sitting on top to provide just a little comfort is a diamond-stitched seat and below a custom tool pouch that is placed just in front of the carbon fibre hugger. Being the BMW man that he is Ron chose to dive into their paint catalogue and came away with the stunning Messing Metallic. To contrast, a Lexus Bronze is used on the frame and wheels which is also replicated in Cerakote on items like the triple trees and the results speak for themselves.

Having gotten the engine running before he tore the bike down, it was time to get it to perform and the throttle bodies were sent to Trevor Ditstang in Arizona for a full overhaul. Above is a stunning carbon fibre plenum that is fed by a “repositioned MAF with a custom 3D printed intake, painted to match the tank” and wears an M logo. The air filter housing now stores the battery and BMW ECU, with a 4 into 1 exhaust that was also Cerakoted ending nondescriptly out of the right side. Nobody should ever doubt the K engines ability to look cool again.

The finishing touches to the bike are all quality, a Koso thunderbolt headlight is held on with Max Inc mounts with a provision for Motoscope mini-pin blinkers. The Motogadget catalogue was also raided for everything from the m-unit to control the electronics package and just about every other component that they offer.

With the company’s grips and Dixer Parts rearsets giving the rider the ultimate control of this incredible K. With more in the build that are being finished in time for delivery for the DGR in Chicago, Ron has the perfect plan to get them there. “I’m a big family person so me and my two sons are really looking forward to the road trip. I’ve made some really close friends and discussed bikes with people from all over the world, it’s truly amazing.” Just like the bikes he builds.