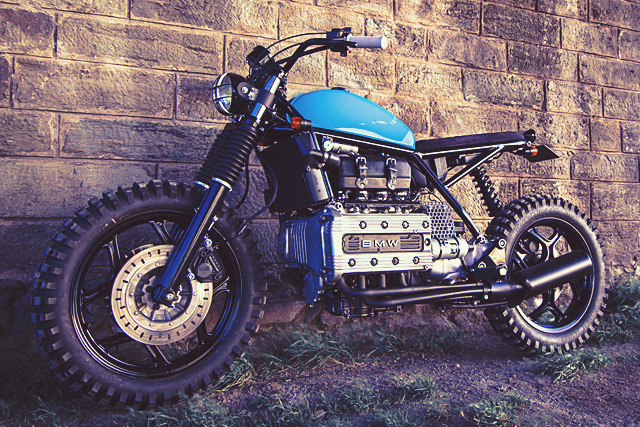 Approaching one of the most enigmatic builders in the world with your idea for a custom build can be a nerve-racking experience, when you bring a limited budget and a quirky bike to the party you might want a stiff drink first. But for Karl “Ed” Renoult of France’s Ed Turner Motorcycles every new challenge is a chance to test his building skills and in this case give some attitude to a bike in its original fair he describes as a “Norman Wardrobe”. Hugo the owner of this BMW K100 really only had two requests, he wanted a blue tank and a tracker build the rest would be in Karl’s more than capable hands. Only one other thing, Hugo is a student and as Karl found out that meant “no dosh”, but that hasn’t stopped Ed Turner Motorcycles turning out another first class build proving yet again a great builder doesn’t need a blank cheque to create a masterpiece. One element of the K100 that is often not appreciated is the frame and it is here that Karl has made subtle changes that make all the difference. Just like Ducati’s famous frames it’s a tubular space frame, with the engine serving as load bearing component, however unlike Ducati the German designers chose to hide their masterpiece with gaudy plastics. Not Karl, he has French flair in spades and the reworking of the subframe is a masterclass in less is more. Cutting off the big hunk of metal and triangular support structure he’s fabricated and welded on a more traditional single hoop design, with straight rather than upswept lines and supports that run from the frame and not the rear engine mount. De-tabbed, smoothed out and painted black it gives the BMW much nicer lines and a more traditional tracker look. Having given the big BMW a much slimmer profile the enormous standard tank would never have worked and finding the right tank was one of the first priorities of the build. Fitting the frame like a glove is a beautiful item from an old Spanish 125, if you want to copy Karl you’ll have to do your research, which gives the machine a single clean line from front to back. Hugo’s request for a BMW blue was one of the few he had and Karl didn’t let him down, the subtle sky blue further minimalises the bulk while giving a nod to the golden era of scrambling. The seat while simple is beautifully stitched and hugs the frame with no overhang in the same way as the tank, it’s what good design is all about! Karl did make one very clever rescue from the standard tank, nabbing one of the badges and using it as the top of the gas cap. You can’t discuss a BMW K series without talking about the engine and they’re not known as a “flying brick” for nothing. But while the engines looks might not be to everyone’s taste the performance certainly is. The 987cc horizontally mounted four cylinder makes freight train like torque at low RPM and is surprisingly happy to rev hard for an engine of this design. Karl has used some of his seemingly endless ingenuity to clean up the look of the motor with half a leather saddle bag disguising the giant airbox and a pod filter mounted on the inlet side for that faux carby look. New chrome clamps and allen head bolts work with a mix of blacked out plastic and cleaned metal surfaces to give the old girl a new lease on life. The final touch is the fitting of an external Bosch style fuel pump necessary with the change of tank. Steering the beast are tracker bars with a little extra rise as the BMW triple clamps factory bar mounts have no rise built into them. The standard switches have been cleaned up and came up a treat and the black of all the controls, including the new single speedo is offset by the stark white grips. The small front headlight that replaces the BMW item gets a tough look thanks to it’s blacked out grill and some more leather is used as straps to hold it in place instead of the extremely common metal ears most people use today. Built to be ridden and not just a display piece Karl fabricated mounts for indicators all round, four amber-lensed bullet items that do the job without being intrusive. While out back a small tail light and number plate bracket keep the rear of the BMW clean until the rooster tails of mud are unleashed! With Hugo’s limited budget there was no money to spare for big dollar brake and suspension components so Karl had to work with what was there. The factory forks are held by repainted triple clamps with new bolts, the lower legs are painted in a frame matching black and a set of Gators add some extra form and function. Out back the new subframe meant a new mount for the single shock had to be fabricated and this gave a chance to raise the rear for more travel for those days on the dirt. BMW didn’t skimp on the brakes with twin 285mm slotted rotors up front grabbed by twin piston calipers and a single piston caliper grabs an equally sized single disc out back. The standard wheels have been painted black to visually blend in with the rest of the bike and lose some of their ‘80s quirk. But with Karl knowing his client wanted “to play in the mud and… Parisian avenues” tyre choice was going to be absolutely critical. For the visual of seeking the tracker look many just grab a set of dirt track tyres and slap them on, but you don’t become a world-class builder by taking short cuts, even on budget builds. So Karl found just the right tyre for the job, a tyre so good the Swedish military use it for its high-speed capability and it’s go anywhere tread pattern; The Mitas  Sport eXTreme XT-644 Army special and it’s these little trick of the trade and plenty of genius that have enabled the Frenchman to take a big old tourer and turn it into a modern Euro tracker all on a student’s budget.