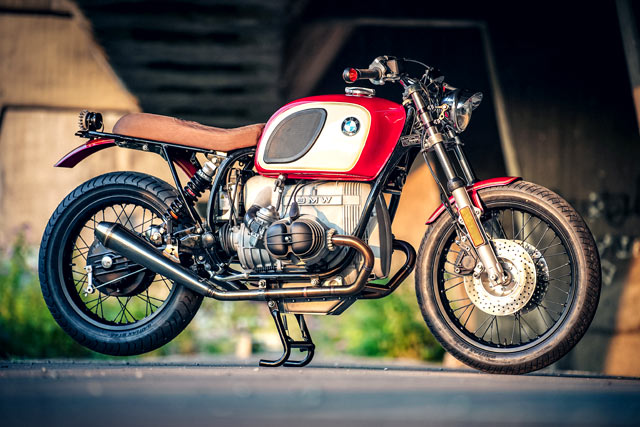 Custom bikes can be so fancy sometimes. Like a Mardi Gras in Rio, an interplanetary spaceship or Hunter S. Thompson’s narcotics routine, they’re silly big and super impressive but it’s not something you’d want to deal with on a daily basis. Or as my Dad used to say, ‘If you ate lobster every day, soon you’d be craving a sausage roll.” Dirk Oehlerking loves a good sausage roll almost as much has he like building great Beemers. Here’s his latest no-nonsense creation, an R80 intended for cruising on the beach. As with all successful retail enterprises, repeat business is crucial for making a buck. It’s no different for custom bikes. “Our customer, who already has a Kingston BMW R100R Cafe Racer, commissioned me to redesign his ’85 BMW R80ST.” Dirk got down to thinking about the bike’s design, and a healthy mix of active neurons and cold beers helped him spawn this, Kingston’s BMW ‘Beach Cruiser.’ [superquote]“The guy knew Dirk was more than capable of handling the devil in the details.[/superquote]

“The customer had the following requests: a Motogadget Chronoclassic Speedo, a centre stand and the usual Kingston tail light with the star nut,” says Dirk. And with such a brief list of demands, it’s probably safe to assume that the guy knew Dirk was more than capable of handling the devil in the details. So Dirk got to work. “I started by building a BMW R75/5 tank, which is beautiful and fits perfectly into the design.” Agreed on both counts, Dirk. “Then out back I welded a new frame tail as a classic flat loop and a new bench seat that fits perfectly with the bike’s overall line.” A line that seems to be one hell-bent on slimness, we’re thinking. The factory’s telescopic forks were shortened by 50mm, while the rear monoshock from YSS was left at exactly its original length. “Then I got my hands really dirty. The BMW R80 engine was completely rebuilt before being fitted with the old BMW /5 air filter and aluminum cover to improve the looks.” And, as always, Dirk’s ignition lock placement was done in the classic Kingston style. Next came the bike’s elemental considerations: water, air and light. “The Universal Fenders are made of aluminum and do their job well despite their relative size. The exhaust system is from Hattech – again in a Kingston style – and the headlight is a classically simple 5 3/4″ Bates unit with a subtle yet charismatic brim to protect the glass. Next, the new Shin Yo tail light was rebuilt according to the client’s request with a BMW star nut. And up in the front, a second brake disc was installed to make quick stops a little less exciting. “Other little touches include the handlebars which are from Fehling and the footpegs which are from LSL.” For the turn signals, Dirk also turned to Shin Yo. And don’t they work a treat? “The Motogadget Chronoclassic Speedo was one of the Beemer’s final touches, along with the Bridgestone BT56 tires.” The cherry paint was the, erm, cherry on top. “With the color I had free choice, so I went for a classic deep red and cream scheme.” Cherries? Cream? Sausage rolls? Whatever the meal, it’s clear to us that Dirk’s ability to create both wildly creative customs and daily riders is truly delightful. Guten Appetit!