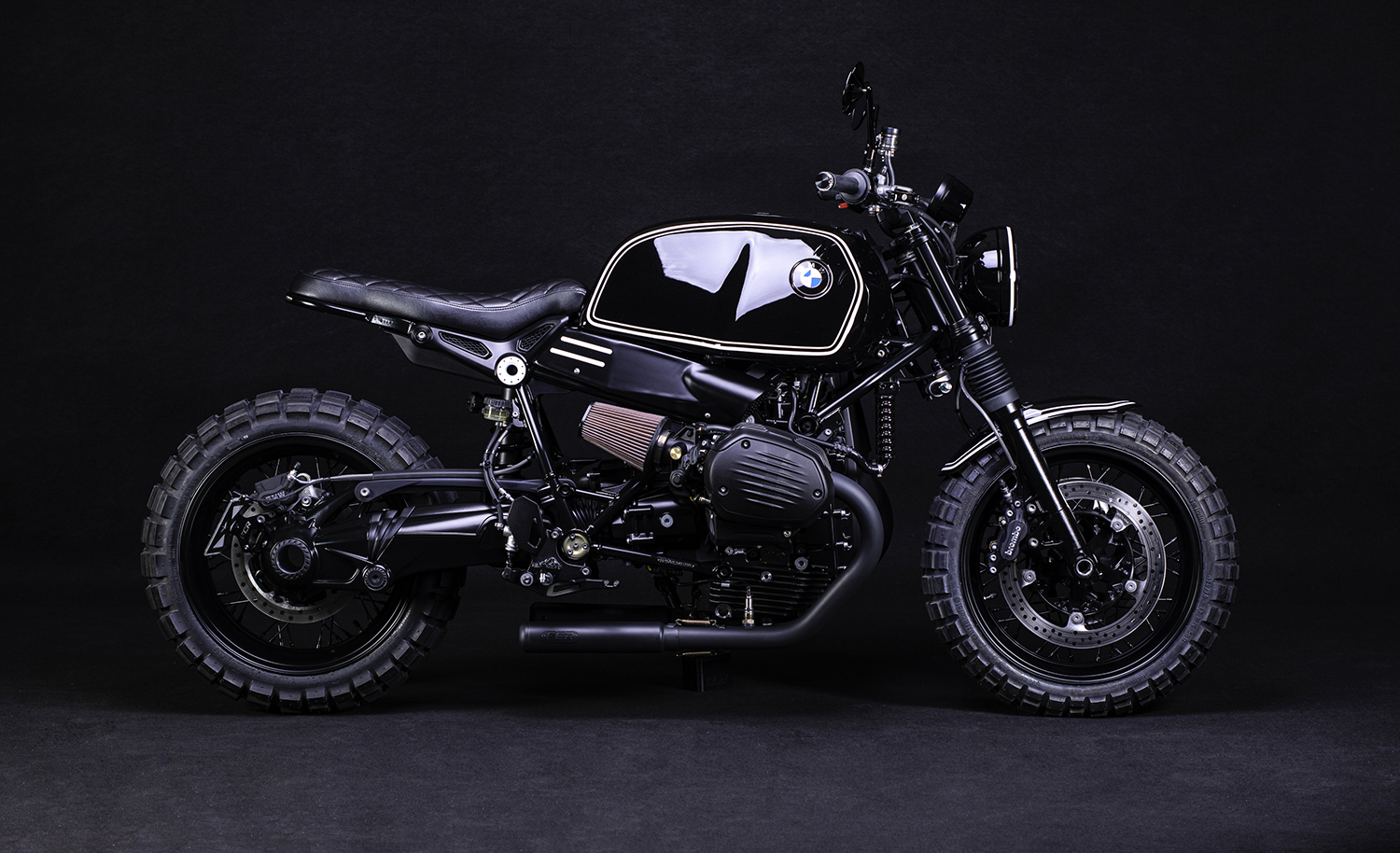 Black has always looked cool on any kind of automobile and while Henry Ford is known for the quote, ‘Any customer can have a car painted any colour that he wants, so long as it is black’, just about every early car and bike was only offered in the hue. One of my favourite motorcycle brochures is for an early Brough Superior that does offer you a choice of sorts, black or traditional black. So if you’re looking to take inspiration from a vintage machine, the chances are the colour choice has already been made for you. But as the French team at FCR Original are here to show, you also have to capture the essence of what made the original great. Presenting their latest creation, a BMW R nineT Pure that is infused with the spirit of the legendary R50/2.

In the R nineT, FCR already had themselves arguably the best modern classic to emerge to date and the Pure makes a whole lot of sense for a vintage-inspired build with its roadster looks, compact fuel tank and slim rear end to transport you back to a different time. But this is not an exercise in turning a 21st-century motorcycle into a bike from another time, it’s a tribute to an icon in FCR’s own style. In addition, the business also uses each build to develop new parts for its huge customer base, so modularity and usability had to be a big part of the recipe.

To get underway, that unique factory subframe was pulled from the bike and immediately relieved of all its plastic bolt-ons and accessories. Then the stock seat was tossed aside and the ugly factory rear cut off and the support struts removed. This is not just a simple hoop job, although many will be fooled into thinking that’s all that has been done, but a clever reworking of the entire rear section into something with much cleaner and more appealing lines. The accessories don’t have to go back on thanks to a frenched in LED light cluster and with improved bracing, it’s all blacked out.

This began a process of simplifying the bike and touching just about every surface with the coal like colour. At the front of the bike, this meant stripping down the forks and finishing the lower legs in a frame matching black, before sliding on a set of gaiters and then treating the exposed stanchions to a hardened DLC coating of the sinister hue. The factory side covers with their almost futuristic forward facing induction tubes have been tossed aside, and FCR has fabricated an all-new pair that takes on a more refined look, but still with the functionality of the factory part.

But above there was always going to be a problem, the factory tank offerings on the nineT just don’t capture a vintage vibe. So an FCR Heritage unit has been used that looks like it was lifted straight from any of the R series bikes of the 70s and 80s, but with all of the necessary hardware to support a modern fuel-injected bike with an awkward frame to mount onto. Then along with the front fender and the factory headlight surround, the stunning black paint was laid down with R50/2 inspired bold white stripes that provide a timelessly beautiful look.

For more old fashioned craftsmanship, an all-new seat base was designed to suit the reworked subframe and over the top it has been upholstered in high-quality black leather, with a matching stitch, that’s finished in a diamond pattern. The seat is clearly designed to suit two-up riding, but having cut the back subframe struts off, FCR instead offer their own kit that allows for pillion pegs that bolt to custom mounts. These too are of course finished in black and the rider gets their own set of custom footrests from the FCR catalogue.

The engine was next on the list and just about everyone has had a go at giving the modern boxer twin a unique vibe. But the all black appearance serves it well and the simplified front cover and valve covers help to blend everything into one solid mechanical lump. To neaten things up the battery has been relocated with an FCR kit and the intake is allowed to roar thanks to a set of big pod filters. On the exhaust side of things, it was back to the company catalogue for their Street Bobber system that is ceramic coated.

A host of nice accessories have been bolted on, from the FCR handlebars and headlight mount to the quality Brembo radial master cylinders to improve the braking and clutch feel. The wheels could only ever be spoked and the company’s own replacement wheels for BMW models are swapped on before it was time for a set of tyres. Here I’m sure opinions will differ amongst the masses, but let’s be honest, they’d be canned for fitting firestones or other vintage looking rubber and the almost slick-like appearance of new street tyres would have been out of place too.

So it’s the ubiquitous TKC 80s that get the job, and personally I like the touch of aggression. But however you like to wear your rubbers, there is no arguing that this tribute to a star hits all the right notes.