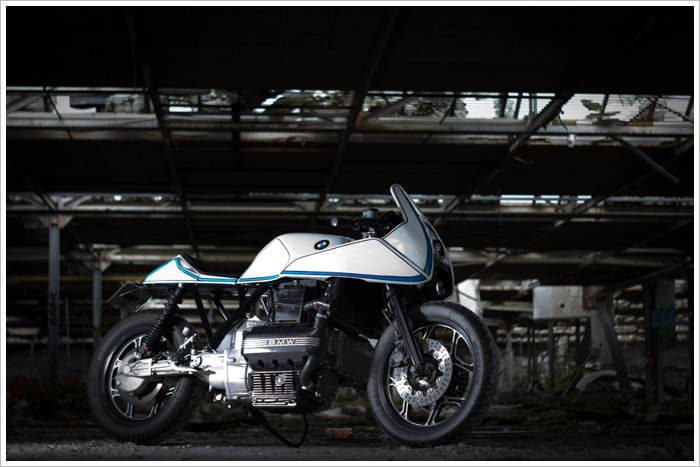 It’s hard to believe that when the Sydney Opera House was unveiled back in 1973, a lot of the public called it the ugliest building they had seen. Not that it was truly ugly, but because they hadn’t seen anything like it before. Now I’m not saying this BMW is the “Opera House” of the custom world. But I am saying you probably haven’t seen a K100RS like it. Roel Scheffers from the Netherlands is the man behind this unique Beemer. Roel has built many bikes over the years, usually streetfighters and choppers, so this build was a little left of field for him. As a kid he used to ride on the back of his Dads K100, so this model holds some special memories to him – he wanted to build something different while still keeping the soul of the K100, and we reckon that’s just what he’s done. Roel bought the donor bike last year – a 1986 K100Rs from a guy who had it sitting in his shed for over 5 years. “With some new fuel and a push it ran great!” says Roel. “My idea was to build a unique bike on a unique base. I’ve seen some K100 rebuilds, but very few good ones. When I was a kid (I still am.. but a bit older) I rode many kilometers on the buddy seat of my Dads k100, so I actually like the design and I wanted to use as much from the standard fairings as possible.” The first thing he did was strip it down. “I chopped everything up, front fairings, seat-part and even the tank and frame” he says. “Then I went on putting out the lines for the bike, that was the most time consuming part I guess. After that, I welded up the rear end of the frame, welded up the tank again and did a lot of polyester work on the front fairing and the seat-part.” Roel made the exhaust out of segments of stainless-steel tubing. “It took me a loooonng, loong weekend to complete that puzzle, but it was totally worth it!” he says with a smile. “The headlight unit I made out of aluminum just as I did with the dynamo cover and some other small details. Collected some more parts, footpegs, clip-ons, speedo, etc etc. After the first test-drive which was quite successful I went on with taking it apart and cleaning the engine and other parts. Simultaneously, the paint job was done by Kustombart – it has a real nice deep blue and a subtle “mother of pearl” white finish in it. I think they did a really great job” After installing new bigger injectors and an adjustable fuel pressure-valve Roel tells us the bike began to run “really, really nice” in combination with the K&N filter, home made air-box and open exhaust. “I ride it daily to work now; I think it’s a great drive.” We think Roel has built something truly unique and it’s these kind of builds that always polarize peoples opinions. You either love it or hate it. Where do you stand?