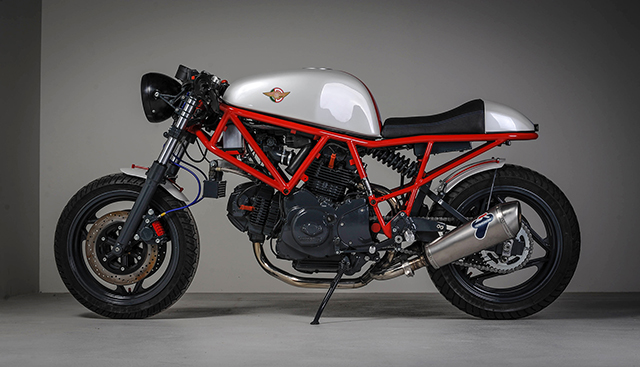 From Switzerland, you head up over The Alps to Milan, swing east for Venice before rounding the Adriatic and opening the taps for a full days ride across the Balkans. Here you find yourself on the outskirts of Belgrade in front of a nondescript industrial building. This is the journey one man took to find Nemanja of Serbia’s Clutch & Brake Motorcycles. Six months later he returned to collect his hand beaten and brilliantly emblazoned 1990 Ducati 750, for the final return leg of his European custom bike expedition. 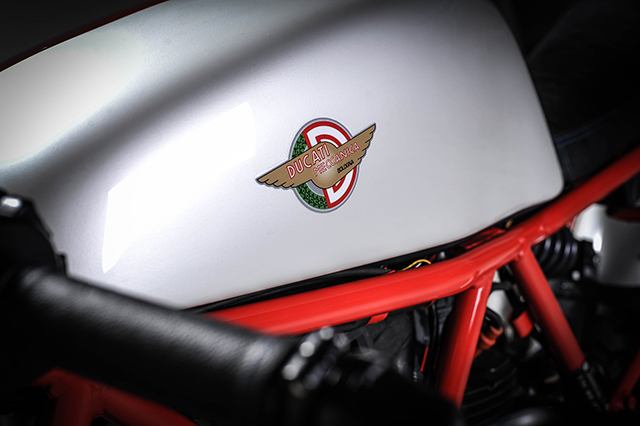 A university educated Economist, Nemanja had been bean counting for just long enough before he decided life had so much more to offer. And with a life long passion for motorcycles he left behind the corporate world to build custom bikes; wrenches over riches! “We are a small country with a big passion for motorsport but we don’t have money like countries in Western Europe.” Inside his workshop, the high ceilings, dim light, bare timber floors and spread of hand tools give it the feel of a bygone era garage. 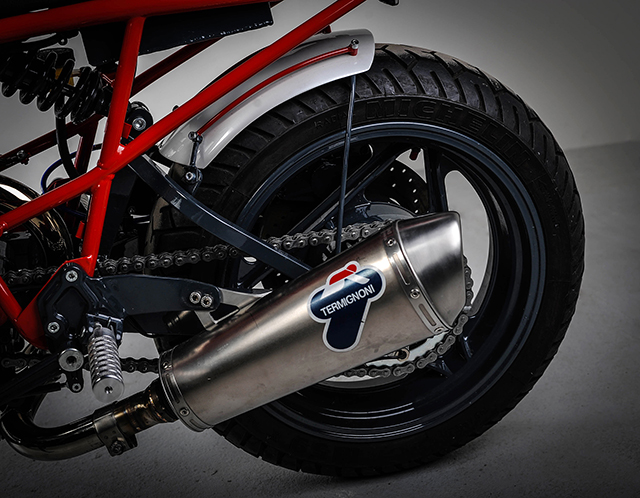 On the single lift, he rolled the Duc 750 and hoisted it into the air to examine exactly what he had to work with. Dented bodywork, plenty of corrosion and nearly 30 years of wear and tear meant the Bologna creation would need Nemanja to work on every inch of the machine to bring it up to scratch. Starting off with the frame, he chopped the back end off and used his prodigious welding skills to fabricate a new subframe, with a lower and flatter seat height and hooped rear end. 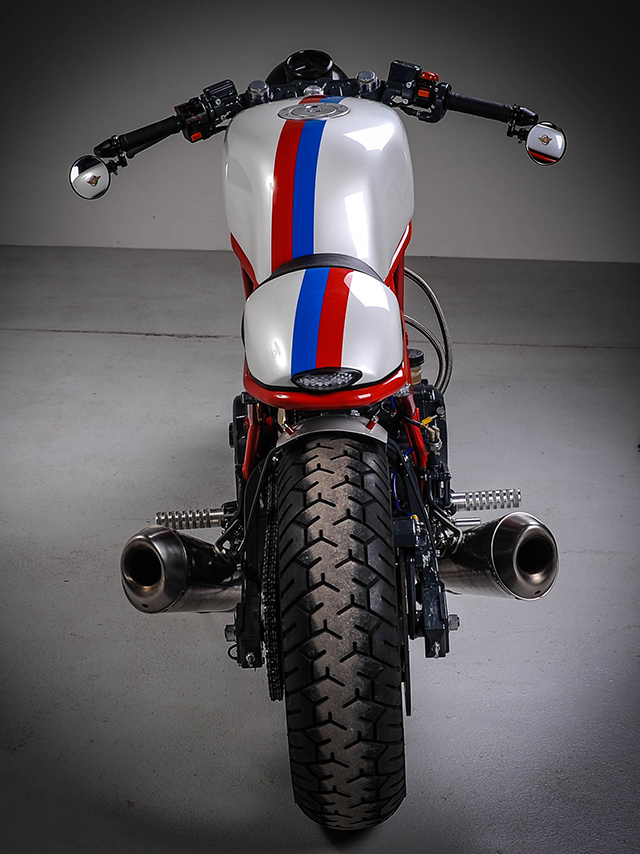 With the metal work having seen better days, he could have searched for a new tank, but to get the style he was after the decision was made to handcraft all the bodywork. The tank takes its inspiration from the lines of the ’80s SuperSports with smoother lines, subtle knee dents and a flush fit filler cap. With the raw metal unit sat on the frame as a reference he then hand beat a rear cowl with the same flowing lines for a factory level finish. 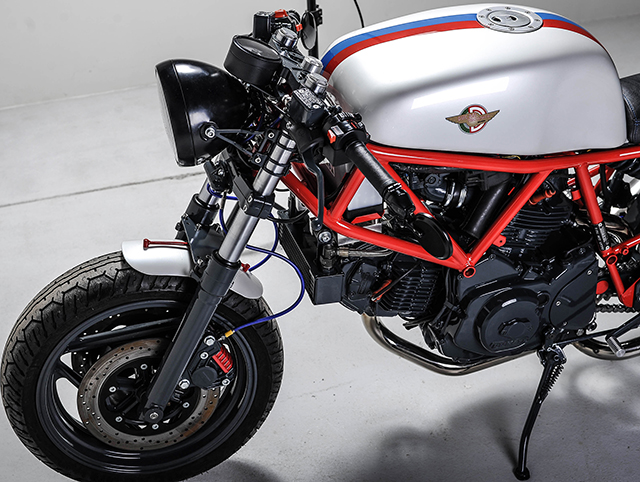 With fenders a customer requirement, Nemanja decided to steer clear of any plastic on the bike and shaped up a pair for the front and rear. But to further show off his metal working skills he went away from traditional mounts and instead used rolled round bar that runs laterally in a frame matching the shape to affix them. Before padding up the seat and firing the sewing machine into life to create the blue stitched, black leather, cover and hand grips. 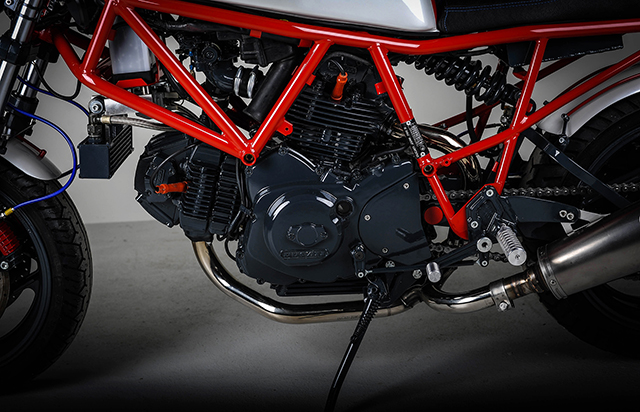 With the bike torn down, the parts were separated into two piles; one for powder coat and one for paint. Over at nearby Imperial Painting, the tins are treated to an American muscle car inspired scheme, with the red and blue speed stripes laid down in a diagonal direction over the stunning gloss silver. Everything else gets powdered in Ducati red and a gloss dark grey for all the parts that are visually required to disappear into the background. 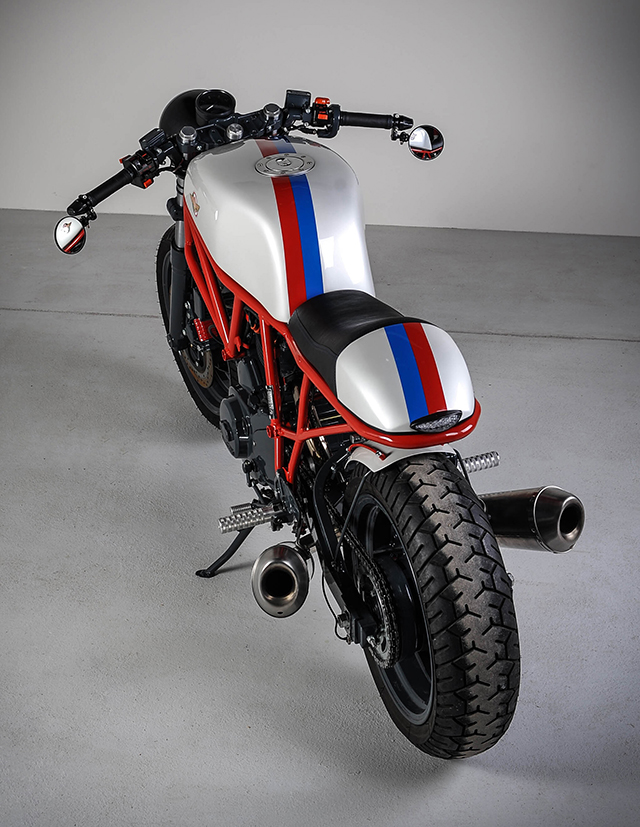 This includes the fully rebuilt suspension front and rear with even the rear spring getting the matching colour. The internals of the front forks have been overhauled with 70mm lowered springs and new oil to match. With the triple clamps cleaned up on the CNC machine and a new steering stem nut made from scratch. Still in engineering mode Nemanja made a new upper mount for the rear shock to change the attack angle and the bike now handles superbly. 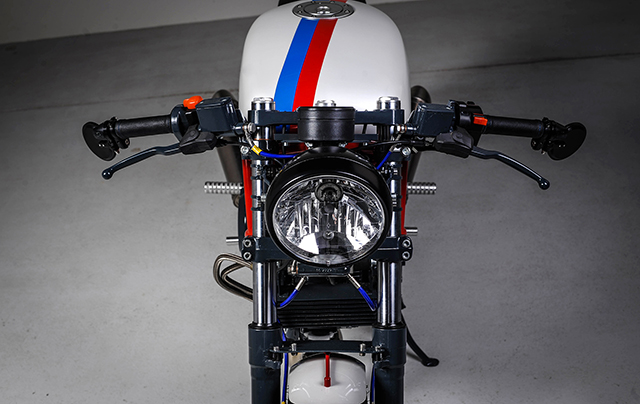 Turning his attention to the Ducati 750cc engine that was the mainstay of the companies middleweight line up for years. He treated it to a full rebuild, before welding up a stunning stainless exhaust that ends with twin Termignoni end cans. From the refurbished switchgear to the hand turned foot pegs, no part of the bike is left untouched. And Belgrade’s Clutch and Brake continue to show that one man’s passion to pursue his dream can see many others reap the rewards! 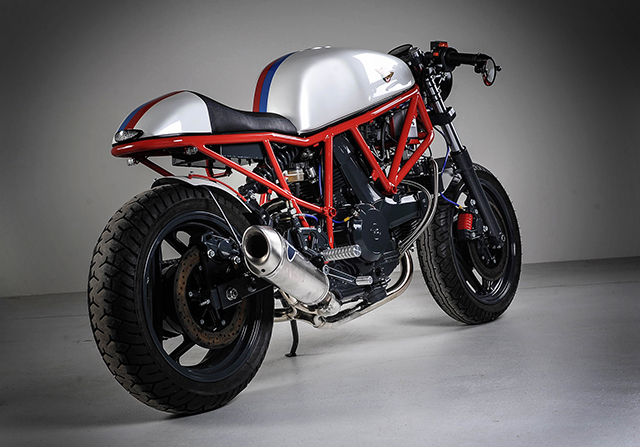