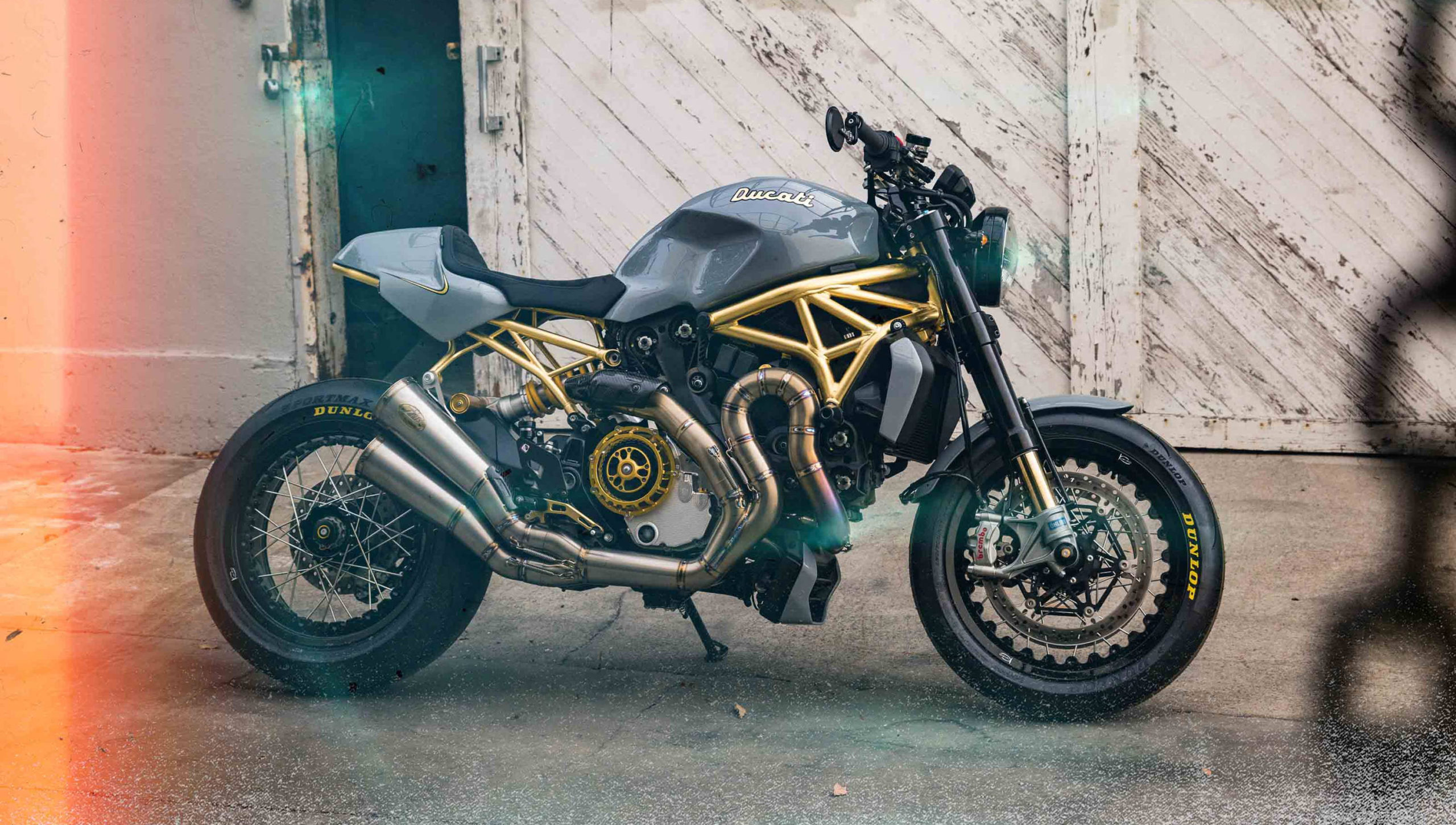 It’s the bike that saved Ducati from the liquidators and has gone on to be a global icon all of its own, but the Monster has come a long way from its humble origins. Once a parts bin special that was primarily about filling a void in the model line-up, the Monster is now as important to Ducati as any other machine and has been given all of the latest tech the Bologna factory has on hand. So, armed with an all-conquering 2019 Monster S, where do you turn if you want to bring back some of that initial style that made the bike what it is today? The answer, Roland Sands Design, where brilliant ideas are brought to life by some of the industry’s very best.

With variable valve timing, plenty of horsepower, and features like wheelie control and cornering ABS, the Monster S is a hell of a bike. “The owner didn’t want to lose any of the stock bikes function, but wanted to upgrade parts, lose a little weight and do a bit of a classic rewind with a standard round headlight conversion and tracker inspired tail. He spends a lot of time riding with a group of guys on Harley’s, but a Harley was not his bag. Different degrees of a V-twin as it is, but he wanted to throw a little flash at the bike as well. Call it a Classic Canyon Carver Custom.”

To get that tracker rear end going, in-house hero Aaron Boss pulled off the factory subframe and fabricated a stunning new piece, a handbuilt chromoly steel tube trellis that takes the bike back to its roots. To make even more of a statement, Aaron then trimmed back the stock fuel tank to better align with the tail section to come and stripped away the electronics that are normally hidden under the seat. This creates some beautiful negative space that allows the new rear to really shine and also shows off mechanical elements like the Ohlins shock to maximum effect.

The tracker tail end is brilliantly crafted and lays flawlessly over the subframe, with the gap between tail and tank perfectly executed; an area where many often fail. With the back of the bike looking the goods, a left-field approach was taken to giving the Monster some more vintage appeal. Who would ever have suspected a Royal Enfield GT650 front fender would find a home on a modern Ducati, but with a custom set of struts it does and works brilliantly. The headlight too is a classic round unit, but has modern internals with an LED kit from Revival Cycles.

Now the team had something even more special in mind and they knew just the man to make it happen. “Chris Wood at Air Trix was up for the challenge and dedicated his time and energy to doing something he’d not done before. The frame and subframe are 100% gold-leafed on every surface. The bodywork was covered in a simple battleship grey with a classic Ducati tank logo in gold leaf to match the frame.” It quite literally looks a million dollars and tying it all together in style is a stunning seat in custom leather and Alcantara synthetic suede from Saddlemen.

With the Monster more than looking the part, it was decided the Testastretta, now with open belts, needed some additional power. “Zard made a custom Titanium 2-1-2 exhaust system and shipped it over fresh off the workbench in Italy.” Before Boulder Motorsports reflashed the stock ECU to match the timing and fueling with the less restrictive exhaust system. And an STM Evo GP dry clutch conversion adds plenty of that signature Ducati rattle and performance from the past. With Ducabike billet rearsets added, the new owner can now throw the gears at this barking made twin with ease.

The late-model S is one of the best handling Monsters to ever leave the Bologna factory, but that doesn’t mean things can’t be improved. The front forks were pulled out, re-anodized in black, fitted with a GP Suspension cartridge kit, and then bolted back to the bike with CNC Racing triple trees. The rear Ohlins shock is on full display and the wheels come via Brocks Performance for the full spoked-out effect. 17-inch rims by Kineo were custom built in black and stainless steel, before being wrapped in Dunlop Q4 tyres for extra sticky grip.

The bike is then decked out in all of the latest and greatest components to ensure the owner has nothing but the best. The cockpit is a mix of Pro Taper handlebars, Renthal roadrace grips and CRG bar end mirrors, ASV folding levers, AEM Factory integrated titanium fluid reservoirs, and RSD turn signals. The chain is now a Superlite 520 that works with a billet quick-change sprocket carrier, polyurethane cush drive upgrade with titanium hardware and Aella axles nuts.

To finish out this glorious beast, a full set of crash protection was added and it seems when this stunning RSD Canyon Carver hits the turns, the only hope the Harley boys have is if the owner lays in on its side, and even then, Mr Sands has ensured he’s covered.