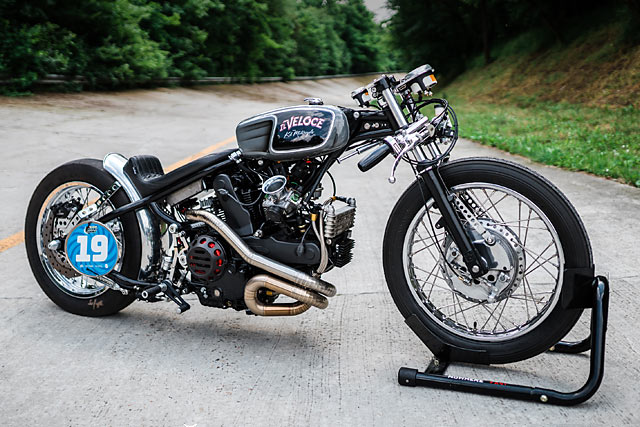 For twenty years Laurent Kesteloot and Pascal Demeulemeester obsessed over custom motorcycles. They read magazines. They watched shows. Then they realised it was about time they have a crack themselves, and the clever pair started KD Motorcycles. Just a few years later they’re doing work like this – a 2005 Ducati Multistrada in a hand-built frame designed to tackle the Sultans of Sprint series. You should know about the Sultans by now. But we’ll go over it again. It’s a short-range sprint series run across Europe. A competition that not only awards points for winning, but also for drinking, bravado and having the best-looking ride. And that’s what Il Veloce was built for.

So while the Multistrada needed to be competitive, it also had to look incredible. And there’s nothing inspiring about the stock Italian tourer. So the entire frame was built, from scratch, to look like an old-school drag bike. There’d be no box-section alloy here. No CNC. It was designed and built the old-fashioned way. The difficult way. The KD team designed and built the frame from nothing in their Belgian workshop. ‘Most of the parts were machined, folded, cut and polished in there,’ they say. The process proved difficult, with no components of the existing frame used. Most importantly, there was no laser cutting and no 3D blueprint. Everything was done with a tube bender, metal files, grinder and welding rod. Other parts of the build were sourced from various swap meets or online. And there’s some really neat stuff there. The fuel tank is from a 250 Ducati with a colour scheme laid on by Zeus Design in Italy. The forks were taken from a 750 Duke. The seat, designed in-house, was upholstered by Curi Concept. The throttle assembly is a vintage Tomaselli number. But one of the neatest components on the Il Veloce is the front drum.

[superquote]“Other parts of the build were sourced from various swap meets or online. And there’s some really neat stuff there.”[/superquote] It comes from a 1972 GT750 and it’s a piece of mechanical art – and a rare one at that. The GT750 water buffalo was an enormous, angry two stroker that ran a 4LS front brake until Suzuki management realised twin discs might be a wiser decision. In production for only a few years there’s not many of them around anymore, and the Il Veloce is a fitting home for this uncommon bit of Suzuki history. Now that’s the frame – but to make a competitive bike for the Sultans of Sprint series the Il Veloce would need no small amount of engine work. KD motorcycles sent the powerplant off to BG-Garage Customs for some of their special sauce. In standard trim the 1000cc dual spark engine isn’t an earth-shattering power plant, but the guys from BG did their utmost to change that.

In went a close-ratio gearbox and a racing clutch pack. The ignition module was altered, the engine was ported and flowed, the flywheel lightened and a quick-shifter was installed. There’s a few more secret things going on inside that we can’t tell you about. But trust us – all that work should make a banigin’ short range cruise missile.

KD Motorcycles, in conjunction with BG-Garage Customs have created an incredible looking Ducati sprint bike that’s sure to take the Sultans cup by storm. The Il Veloce is twenty years of research writ in metal. All that reading and looking at custom bikes has paid off. See? You’re not wasting time on Pipeburn. You’re researching.