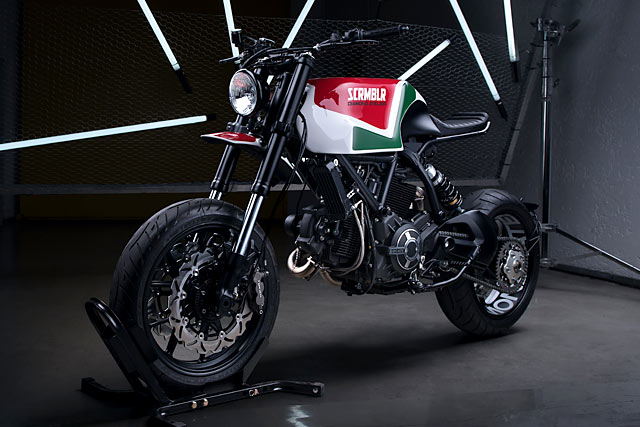 Out of nowhere they burst onto the scene and like the proverbial classic rock band, each new release went straight to number one. From Munich in Germany, custom bike shop Diamond Atelier have been a dominant custom player in recent years with a string of show-winning bikes and a sell-out series called the ‘Mark II’. Now founders Tom Konecny and Pablo Steigleder are going back to where it all began, with new ideas and new possibilities, but all while keeping that same unmistakable D.A. style. The opening track in their latest production is a killer, asphalt shredding 2016 Ducati Scrambler custom with just the right sounds. Take a listen to DA#11. As Tom explains, it’s an exciting time at Diamond Atelier with their recent success paving the way for an exciting future. “We’re in the development stage of multiple new projects, series runs and even non-motorcycle related things, which will be prototyped, evaluated and then turned into reality if we think it’s the right next step.” But for this build, D.A. saw a gap in the market and a chance to do something they hadn’t tried before. From the best of Ducati, they designed a machine that the brand themselves had yet to create and for the first time as a shop, they built a bike with an upright riding position rather than their well-known low slung, ‘clip-ons down the forks’ look.

The base for the build is a 2016 Ducati Scrambler 800 with the overall aim of creating a machine that could be mistaken for a factory special. As Tom spells out, “The fact that if you are not too much into Ducati’s, you most likely couldn’t tell this is not some sort of special vehicle from Italy, such as the MH900E.” The bike was sourced straight from Ducati Germany with the client happy for the boys to start cutting on his brand new beast. The chassis has had the entire rear end cut off with a new subframe built to give a ‘floating’ look and modifications made to suit the new rear end and the tank that was to follow.

It was determined that the bikes geometry would be setup like a Ducati Multistrada, a seriously good handling bike, of a similar height, that’s won at the famed Pikes Peak. At the rear is a single sided swing arm taken from a Monster 1100 Evo and adapted to fit the Scrambler frame. A new shock mount was fabricated and supports a custom-built Wilbers unit for perfect dampening control. The front fork legs come straight off a Multistrada giving exactly the wheel base DA was after, with a custom set of triple clamps securing them to the package. The changes at each end meant the factory wheels and brakes, right down to the lines, would no longer fit. Those problems are solved with the running of all new custom steel braided brake lines from ABM with alloy fittings. Making sure the Ducati will stop on a dime is a thumping set of Tokico 6-piston calipers clamping a pair of 320mm slotted wave discs. The rear brake is a Brembo from a Monster with an ABM radial pump sending the fluid through the new lines. To reduce unsprung weight at the front end and make the most of the new suspension package a Panigale wheel is fitted, with a Monster Evo item at the rear all wrapped in Metzeler rubber. Now Diamond Atelier had themselves one hell of a rolling chassis, the next step was to dress it up just right. So the boys dived into the archives, “Looking through Ducati’s history, we kept stumbling upon the old endurance race bikes with their super conspicuous NCR tanks. So not knowing if it would fit – both style-wise and mechanically – an old NCR tank was sourced and was tried to be made fit the frame.” But as with mating anything old and new, the modern airbox and pump assembly meant the already large tank just wasn’t going to work.

[superquote]“Now Diamond Atelier had themselves one hell of a rolling chassis, the next step was to dress it up just right.”[/superquote]

But determined to make it happen the NCR product was sent over to KRT (Marvin Diehl), where after an enormous amount of cutting, welding and re-fabricating of the tank, it now fits like a glove over the 2016 frame without losing any of its old school charm. Adding to the Scrambler looks, a hand rolled front fender is bolted to the bottom triple clamp with a custom bracket. Along with the tank they are the only two painted parts, but the Italian Tricolor scheme with DA graphics are impossible to miss and make a bold statement amongst all that black. The motor is of course a classic Ducati L-Twin, air-cooled, single cam heads, it’s as close to a meat and potatoes engine as the Italians get. But that was exactly why the DA team wanted to use it; so many Ducati specials over the years have been powered by the same basic engine configuration and its unmistakably from the Bologna brand. But to unleash a sound track fit for such a special machine, a full custom stainless steel system was specially built by industry giants SC-Projects. Then it was time to wire it up “Now we know why most other custom Scramblers still run the stock speedo unit – because it is a nightmare to take out and still keeping vital functions of the bike,” sighs Tom. But with a complete custom harness they made it work and a Motogadget Motoscope speedo reduces the bulk in front of the blacked out flat tracker bars. Despite the minimalist look, it’s absolutely road legal with tiny Kellermann indicators and a small front headlight shining the way. A small tail light completes the package and a custom bracket was fabricated to hold a license plate behind the rear tyre. The tall stance of the Ducati is no problem for the client who stands well over 6 feet tall and to finish the build a beautifully stitched black leather seat provides his throne. Now all that’s left to do is turn the volume to 10, pin the throttle and unleash this urban assault vehicle on some German black top. Diamond Atelier have delivered again and this won’t be the last time you see a flat bar beast roll out of the Munich studio.