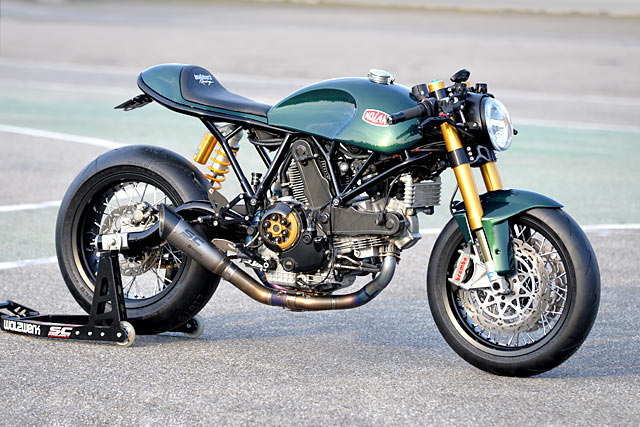 Chances are if you’re into custom motorcycles and have a deep love for bikes, then you spend more money on them than most people consider reasonable. Call it crazy, but this is our culture and once the need for speed is in your veins, digs its hooks in deep, you’re addicted. But one thing I’ll never understand are the folks who spend a fortune on their machines and next to nothing on safety gear. So to spread the word about how important it is to protect your brain and your body, Italian helmet company Nolan and Germany’s custom king Marcus Walz joined forces. The result is a smooth as silk 2006 Ducati SportClassic Cafe Racer that’s head and shoulders above the rest. WalzWerk Motorcycles and Nolan have a long association, with the helmet maker supporting Marcus throughout his racing career. It should come as no surprise that its been such a successful partnership with both firms believing heavily in innovation and absolute quality. Nolan the brainchild of Italian Lander Nocchi who wanted to bring astronaut levels of personal protection to the automotive industry in the ’70s. While WalzWerk’s main man Marcus has been taking stock machines and transforming them into wicked works of rolling thunder for decades.

The Sport 1000 from the Classic line is a rare bike to go cutting into as they still command a hefty price but when Walz discovered this one he knew it was the perfect base and had to rescue it from its current location. “This one I found by accident at an Audi dealership, where someone traded it in for an Audi Convertible. Unbelievable…,” the custom king says with disgust. But from rotting on a car lot to being placed on a work lift at the Mannheim shop, the rags to riches story had already begun for this Ducati the second it was destined for a WalzWerk overhaul. “The most charismatic part on a stock Ducati Sport 1000 is the big gas tank. So this one was the first I want to change, to make the bike not immediately visible as a Ducati Sport Classic and to make the bike look more lightweight.” explains Walz. But before he could begin to transform the tins the wide frame of the big Duc had to be drastically altered. From just underneath the gas tank the trellis frame has been slimmed down 15cm from stock and an all new subframe fabricated with stunning sweeping lines moving rearward. Then all the Ducati’s metal work was hand shaped from 2mm aluminium, done the old fashion way until every line was flawless. The result is simply brilliant with the eyes immediately drawn to the classic British styled gas tank, complete with sculpted knee dents and a Monza filler. Not to be out done the tail section is a work of art, the gap perfectly parallel to the new subframe running all the way around. Even the understand is hand shaped to an incredible level of detail, with a tyre recess and a small nook that allows the tail light to be flush mounted.

[superquote]“Then all the metal work was hand shaped from 2mm aluminium, done the old fashion way until every line was flawless.”[/superquote] Wanting to continue the British theme on the Italian Stallion Walz knew a direction change from his usual path was required. “I didn’t want to build another Red Ducati Cafe Racer as I’ve done so many times before. I wanted to mix this build a bit with the culture of the British Cafe Racer scene. So the first thing that came in my mind was the colour, which in this case is British Racing Green Metallic from Aston Martin.” To give it the right touch for the folks paying the bills a mix of Nolan graphics and WalzWerk’s classic hot rod logo were hand painted on.

Keeping the rider comfortable and doing nothing to take away from the flowing lines the seat has been tailored to perfection and wrapped in soft black leather. But while every Walz machine is amazing to look at the experienced racer never builds a bike that isn’t rapid to ride. With the weight heavily reduced the suspension is built to match with new Ohlins front forks clamped by some serious triple trees. The single side mounted rear shock is a custom piece from the good Swedes at Ohlins too but for the brakes its back to Italy. A monstrous set of Brembo mono-block calipers bring the latest superbike technology to the Nolan build. Powering the show is the factory fitted DS9 Desmo engine with 992cc and twin spark it spits out 91bhp from the factory. But Walz was never going to leave it totally stock with the first change a modified airbox. Next his old friends at SC-Project built a beautiful one-off full titanium exhaust system that gives a GP growl to the road racer. The belt covers are carbon, so too the partial clutch cover that shields a super light dry clutch unit from the WSBK Bologna machines from the ’90s. The finishing touch to the power unit was to pull the stock map, give it a tweak before reflashing the ECU. The rest of the electronics package is neatly hidden away with a Motogadget m-Unit controlling the show and their Motoscope Pro digital speedos drastically cleaning up the front end. The new headlight gives the Ducati a more modern look, mounted back against the forks. While the clear lenses of the tiny taillight and four indicators allow them to disappear out of view. The factory switchgear remains but the bars and fluid reservoirs come from a Walz favourite in LSL, while his own turned bar weights plug the ends. For an aggressive riding position the clip-ons are accentuated with custom rearsets for a tucked in feel and carbon heel guards finish them out. The final addition was an all new set of black rims with stainless spokes holding it all together and sticky Pirelli tyres for the rubber. “The most I like is the combination of classic Cafe Racer lines with modern high-end components like the suspension and the brakes. I really believe that this fact, which you can find on many bikes I’ve built, is a huge part of the bikes success,” believes Walz. We aren’t about to disagree.