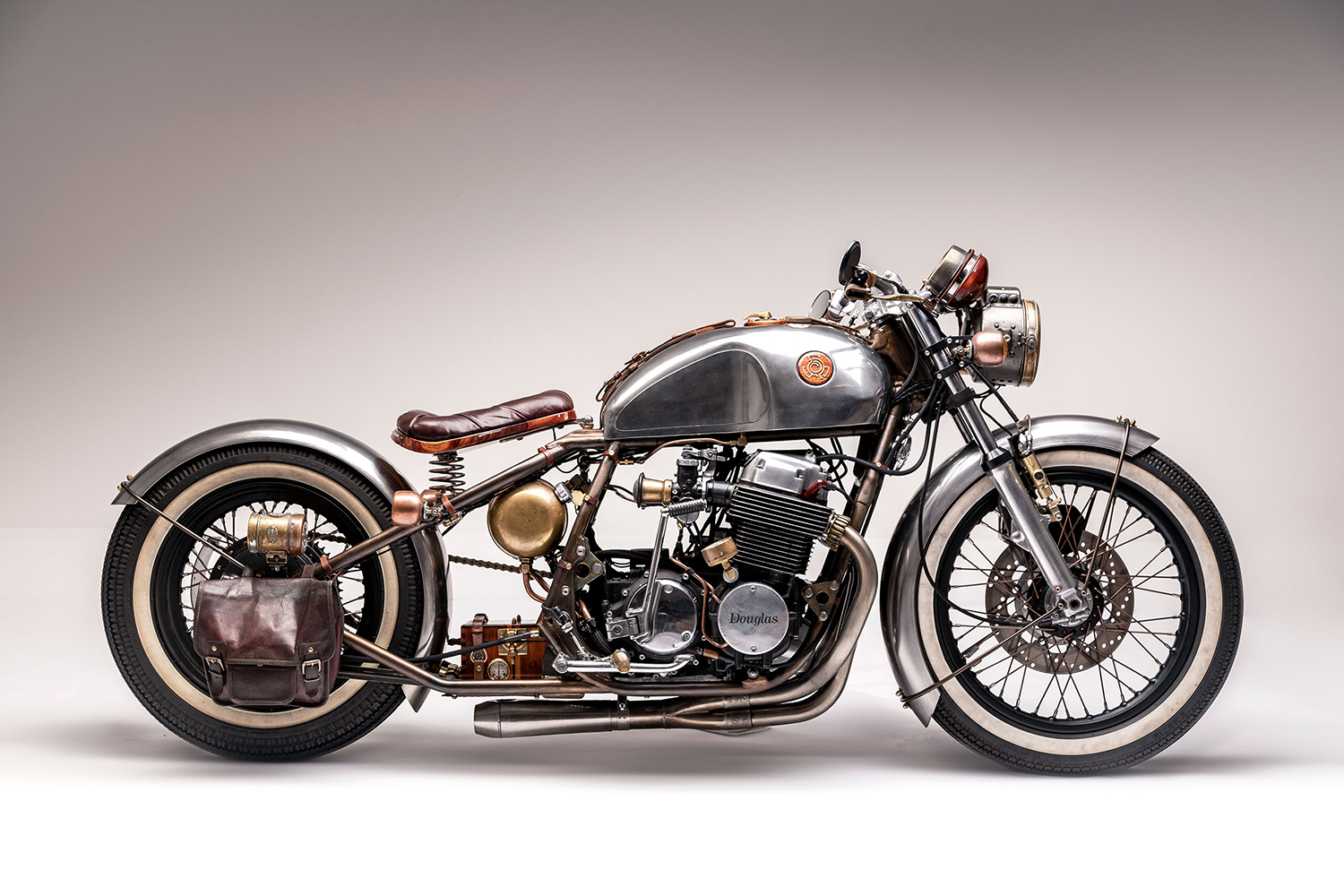 The Australian island state of Tasmania has a reputation for incredible scenery, crisp clean air and some of the best handcrafted gourmet food and drink you’ll find anywhere in the world. But with its isolation the residents have always been a resourceful bunch, preferring to repurpose to fill a void than wait for parts from the mainland. Now enter resident Andrew Knott, a creative force, designer, photographer and sometimes bike builder who operates from within the spinning world of his workplace, Atomic Contraptions. With all of that combined, his latest offering was never going to be conventional; it’s equal measures bobber and steampunk, materials old and new, all whizzed up and turning out a 1972 Honda CB750 called Douglas.

“I don’t know where it came from, but at around 3am one morning I had a fleeting idea for a solo saddle seat made from Chesterfield style leather wrapped over a timber seat pan”.

“I don’t know where it came from, but at around 3am one morning I had a fleeting idea for a solo saddle seat made from Chesterfield style leather wrapped over a timber seat pan. With the timber only really being able to be seen from underneath, like a little hidden detail. There was something about that leather upholstery with timber backing that I really liked, something reminiscent of a French riviera cruiser… and by about 4 am, I decided I probably needed to find a bike to go with it,” Andrew recalls. The Honda was found on the mainland, deemed in bad enough condition to be ok for customisation and cheap enough to be shipped to Tassie.

When it arrived it was clear the previous owner had perhaps left the bike underwater for a good few decades. The wheels were rusted all the way through, the ‘hard tailed’ frame used wooden slugs that were now rotten, metal cancer was everywhere and for good measure the cam had sheered a lobe and torn the engine to shreds. Most of us would have called the scrap metal yard to come and get it, but they’re cut from a different cloth on the apple isle. To repair the frame a lower engine mount section was donated by a fellow enthusiast and Andrew did the hardtail right this time with a kit from TC Bros.

To get the classic Honda engine running again it had to be pulled down to every last piece and thankfully the crank and gearbox had miraculously survived. So after it had all be cleaned, a new set of 836cc pistons were slotted in along with all new bearings. A replacement head was sourced and fitted out with new valves, springs and guides before getting a mild port job. Heavy-duty studs pull it all together, but not before a mild cam was fitted and new chains added to the mix. While the fuelling comes from rebuilt carbs and the exhaust is a sweet 4 into 1 with a reverse cone muffler suitably barking mad.

The rotted out rims meant a switch to 16in Harley items laced with copper-plated spokes and wrapped with white walls the visuals could now take shape. “I wanted to go for a really classic turn-of-the-century aesthetic but offset with a few modern touches and a futuristic lighting scheme. Kind of like a rolling gentlemen’s smoking lounge… think chesterfields, bankers lamps, timber floors, single malt and casual misogyny… with a bit of Tron thrown in. The hardtail and inverted levers were a bit of a nod to this era, and to achieve the latter I had to convert the front brake to a cable operated remote master cylinder set up.”

At the other end of the spectrum, the lighting is based on the futuristic LED halo headlight that’s fitted inside a vintage carbide lamp. The taillight gets a similar treatment with a bicycle carbide lamp used and converted to electric. All this wizardry was performed by Andrew’s father who made it possible by mating up a Motogadget m-unit to a Lucas style switch that sits in the centre of the fuel tank and controls the magic. While more ultra old school parts like the Fergie tractor fuel filter, now the petcock and a brass urn as the oil tank all add to the flare; no ashes still inside we hope!

“Tasmanian Blackwood and Huon Pine provided the contrast of light and dark timber I wanted for the battery box, gauge backs, seat and main switch surround.” His father-in-law and a family friend showed Andrew the woodworking ropes and a place to turn those gauge surrounds. “Given the whole process started with a Riviera Cruiser vibe for the seat, achieving a high gloss finish on all the timber became a bit of an obsession.” Topping the seat is the very Australian Kangaroo leather finished in a diamond pleat. All of which took the weekend, wrestling skippy skin, foam and timber base with the help of his talented wife.

The name of the bike comes from Andrew’s late grandfather Douglas, who served in the RAAF during WWII and in his honour the buttons on the seat come from an air force uniform and the tank strap from a Sam Browne belt. The fuel tank was a trade with a neighbour while some of the endless parts adapted to fit include copper goblets, now indicators and a classic sight gauge monitors the fuel.

It’s all about the authenticity of real materials, even the steel parts are protected by old school gun browning and cold bluing. Each part has a story to tell; you have to truly sit back and drink it all in, preferably with a fine cigar and Tasmanian Whiskey. That’s the charm of Atomic Contraptions, once you’ve admired the inventive insanity, you’ve got a hot rod to ride that’ll stir your soul from the seat of your pants.