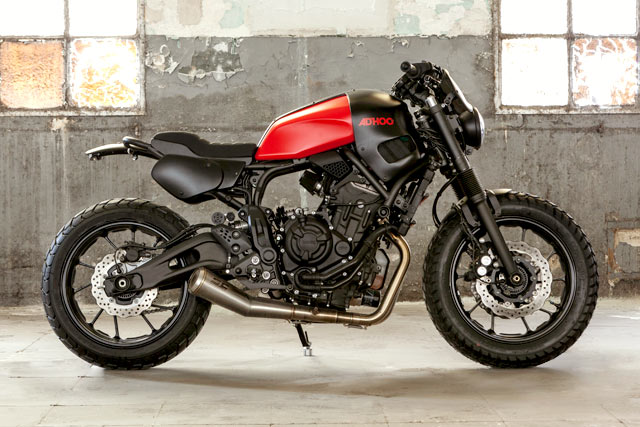 Well, well. Isn’t Yamaha’s XSR range doing it well for itself? It seems like we can’t go for a ride these days with seeing one, or one of their MT brethren, riding the other way. We’re not afraid to admit that, although they are a thoroughly high tech machine in stock trim, they do look damn good. And it’s become pretty clear to us that they don’t mind a bit of customisation, either. We’ve had a slew of great lookers from all the top European builders, and here’s the latest of them. It’s Spain’s Ad Hoc Cafe Racer with an XSR700 that’s a kind of a version 2.0 build based on their ‘Otokomae’ XSR700 from 2016. They call this one ‘Hansamu’. “My workshop is in constant evolution,” says Ad Hoc’s David González, while taking a break from the tools. “Nowadays, we’ve been much more careful in selecting the projects we take on. We’re still waiting for ‘that’ great project which gives us total freedom and an unlimited budget, but isn’t every shop?” Yet business is still very good for him. “Two months ago we moved from our local 70 square metre shop in the mountains to a 350 square meter space just 20 kilometres from Barcelona.” Then in September of last year, David and the team we received a brief from accessories brand Puig Hi-Tech Parts to create a show bike for the Milan EICMA show. “We had just 6 weeks to build this order, and although the Yamaha XSR 700 was a motorcycle that we knew well, it was still going to come down to the wire.”

“The inspiration for this bike came from the Yamaha Yard Built bike I’d already made – the ‘Otokomae’. This one is a ‘civilized’ version of that bike, with fenders and without having the headlight tinted black.” Think of it as the yang to the Otokomae’s ying. Given free reign of the Puig catalogue, David selected a series of top shelf accessories to help the build along, including side and front covers, handlebars, grips, brake and clutch levers, mirrors, blinkers, rear fenders, footrests, tail light, and a fuel tank cap. But that wasn’t all.

“Then we matched these with a new headlight, some Pirelli MT60 tires, a complete SC Project exhaust system, a Gears Racing rear shock, air filters, a new seat, a tank cover and some fork bellows.” Talk about an early Christmas. Then David got down to work… The biggest part of the build was the process to make the new fibreglass shell for the tank. But as a dab hand with the stuff, it came together well. “Once done, we painted it in a matte black, which looks great against the satin red tank below. Then we built a new seat that used the same fixing points as the original, allowing us to still access the toolbox and the battery.”

In fact, the rear subframe was not cut or welded in any way; David simply added more screw threads when he needed a new fastening point. This came in especially handy when he attached the new rear fender and the rear numbered boards beneath the seat. Up the sharp end, Dave made some bespoke mounts to both hold the indicators and form a backing plate for the headlight. Fork bellows were also installed, and the front fender has been trimmed more neatly than a pornstar’s front, erm, garden.

We’ll let David have the last word. “It was a joy to build this bike. There were no real complications and that was always the plan, due to the 6 week window. We wanted a clean, simple, attractive build and that’s exactly what we got.” Here’s cheers to that.