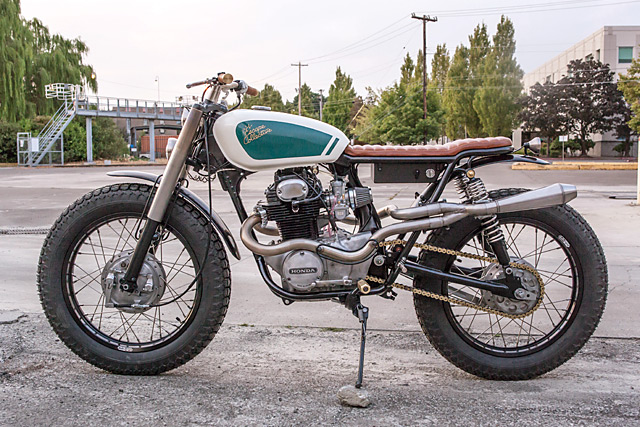 Less than two years ago Hill Hudson had his first bike featured on Pipeburn.com and it was predicated “we have a feeling we’ll be seeing a lot more from this guy in the not too distant future.” Well it seems that prediction has come to fruition, as Hill is back in a big way and his Café Tracker inspired 1973 Honda CB350 sets the bar more than a few rungs higher. While completing his studies in Illustration at the Pacific Northwest College of Art in Portland, Oregon, Hill submitted the first bike in his Escape Series as his major thesis. That Yamaha XS650 was such a success that the philosophy behind the build has manifested itself into a place that is more than just a workshop. Escape Collective is a team of designers, makers, artists and engineers who use their professional talents to create an array of artistic projects, some of which just happen to be motorcycles. It is in this space and with the help of his friends that Hill has created his latest masterpiece, the CB350 known as ESC Machine #002. With the CB stripped to just the frame Hill set about creating the sort of bare bones that would be the foundation for his automotive art. But he isn’t just a brilliant designer, this bike is built by his hands and having seen the build photos he can weld with the best of them. The original subframe was removed and Hill created a new one from scratch, bending his own pipe, sleeving and TIG welding for the ultimate in fit and finish. Most people who build a twin shock bike keep the standard shock mounts. Not Hill, he used round bar to create his own custom items that were designed to make sure they not only look good but keep the geometry spot on! Not wanting to leave it there the swingarm is extended 3 inches and the lower shock mounts modified to retain the correct leverage angle. The CB350 tank is a popular swap for not only other Honda’s but many Café Racer builds but Hill wasn’t interested in just being one of the crowd. So he’s taken an old XL250 tank and cut the tunnel out of it, welding in a CB350 tunnel for a perfect fit to the frame. It’s this extra level of detail that makes spending time studying this build such a reward with Hill going the extra mile on every component. He’s even laid down the paint work himself with the white and green acrylic with “Escape Collective” graphics a brilliant throwback to customs of old. Keeping the rustic craftsman like theme going is the leather seat that Hill made from scratch stitching it together on an old industrial sewing machine. When it comes to suspension on old Honda’s the status quo seems to be either keep the standard forks or go all out using modern USD items. Hill has gone a different route, first the forks were completely disassembled and rebuilt to ensure perfect operation before new covers were machined from scratch that not only look amazing, they give the appearance of what an USD fork might have looked like in the 70’s. Out back the new shock mounts play host to a new set of adjustable shocks with progressive rate springs for vastly improved handling. Steering duties fall to a set of Tracker bars that Hill bent up himself to fit the design of the bike and his personal riding requirements. These are held to the top triple tree with conical-shaped risers that Hill machined up on the Escape Collective lathe. With a clear love of hands on craftsmanship Hill was back at the tools to create more pieces for the build, off the shelf bolt-on components just wouldn’t do it justice. The classically styled front and rear fenders were hand-made with sheet metal hammers and an English wheel. The rear fender holds the tail light that is one of the few components Hill didn’t make, but his buddy James Crowe from West America came to the party with just the right item. The twin headlight setup is more commonly seen on Street Fighters but using Model T Ford lenses it’s a perfect fit and they sit in custom-made housings. The leather wrapped grips with brass ends are matched to a set of footpegs that have been spun on the lathe from hexagonal solid brass. Powering this little Honda is the classic CB350 engine that made it such a hit when it was released, smooth, reliable and peak power at 10500rpm were a rare combination in the 1970’s and holds up with similar sized engines today. To extract a few extra ponies over the 36hp from the factory the fitment of Mikuni twin carbs is a popular choice for very good reason. Extracting the gases are a stunning set of stainless steel two-into-one pipes that Hill, naturally, made himself and finished off with a single short reverse cone muffler in true Tracker style. To keep the look of the 70’s alive the drum brakes have been retained, although thoroughly cleaned up and are laced to 1 inch over stock 19 inch rims wrapped in some period correct rubber. The final product is more than just a well fabricated motorcycle crafted by the hands of a talented young man whose metal work abilities are incredible for a professional Illustrator; This is a machine with a purpose “Let’s be honest, the thought of escaping the day job with a sketchy blanket strapped to your front end and hitting the trail with nothing but a bottle of whiskey and some bacon strips is good motivation to build a tracker style bike” Enthuses Hill. The Escape Collective name says it all, a group of creative friends who find solace in the build process and a physical and mental getaway with the finished product.