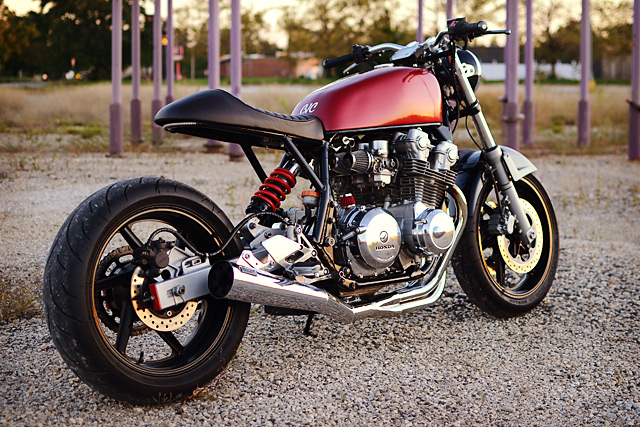 Though primarily a bike wrecker, Jason Reihing has built his fair share of customs out of his small one man workshop, Charlie James Customs, in Williston, Ohio. ‘Every old car, ATV and motorcycle I’ve restored, rebuilt or modified, I’ve felt them wanting to come back to life,’ Jason explains. ‘But this bike was the opposite. I’ve named it ‘Micky’ after the boxing great Micky Ward as, like him, this bike is a fighter. Throughout the build I had a feeling it would have been happier sitting out the back of someone’s barn and rotting away.’ Thankfully Jason has the tenacity and skill to roll out something as pretty as this CB after just about everything went wrong during the build process. As the CB came to Jason as a non-runner in boxes, one of the first things he did was remove the engine and place it on a stand for inspection. ‘The motor was strapped to this stand I made years back,’ Jason says. ‘I use it to power wash engines, pull apart top ends, side covers and that kind of thing. I get to the shop one morning, slide open the door and see the engine laying on the concrete floor.’ Jason was grateful for the lack of damage. ‘Everything was fine and it only left a chip in the floor but it was like the bike was telling me – Don’t Waste Your Time.’ And he might have been right. When the engine was strapped back in the stand Jason pulled the top end and inspected it for damage. One of the previous owners sheared a bolt that holds the camshaft retaining caps in place. ‘Now at first I thought I’d drill and use an Easyout to remove it, but it wouldn’t even drill. I grabbed a light, looked down the recessed hole and found a broken extractor in the core of the broken bolt.’ Jason worried it would have to be burnt out and re-tapped, or he’d have to scour the second-hand market for a used head. ‘But then I had an idea! Extractors are made of very hard steel. They’re almost impossible to drill but they’re fragile with impact. I sharpened a punch and struck the backside of the extractor which fractured it. I then removed the splinters one by one and then started the process again. Bam! Crisis overcome. But more trials awaited. He had a CB650 tank hanging on the wall of his shop that he planned on mounting to the 750, and he’d lavished no small amount of attention on it, with knee dents in the side and a recessed pattern across the top. It hung, primed and was ready for paint when out of nowhere it fell hard on the shop floor. The damage to the front of the tank was extensive, so instead he mounted a ’78 GS550 gas tank. New frame mounts had to be fabbed up and the tunnel ‘massaged’ into place but it now sits perfectly on the frame. And the frame? Well, that seems to have gone smoothly, but with Jason lacking a tube bender he cut and welded individual lengths of steel together to form the back-end, a time-consuming task. The rear wheel, swing arm and monoshock are all from a CBR F3 and helps push the bike into the beautifully blurred line between a café racer and a street fighter. It all works perfectly but I shudder to think of the amount of time spent getting the frame just right like that using nothing but hand tools. Despite the frame going well, even the parts that you think would be simple managed to put up a fight. KTM bar mounts on the triple tree required reinforcement, a torx bit became stuck in the throttle linkage which required disassembly of the carburettors after the bike had already been assembled as well as a myriad of other little problems. Hell, even the front suspension conspired against him. The forks were taken from another Honda, an early 90’s CBR F2. Jason put new seals and fluid in them, mounted them up to the bike but when he tested them they let go a metallic ‘clunk’ on the upstroke. ‘After they were drained, torn apart and inspected I finally had the nerve to disassemble the dampening rod inside. I couldn’t find any schematics on how to pull them apart or put them back together but I finally found the cause. A 40c wave washer.’

But with all that hard work, problem solving and trouble-shooting Jason has a bike he can be really proud of. Damn thing didn’t want to rot out the back of someone’s barn after all.