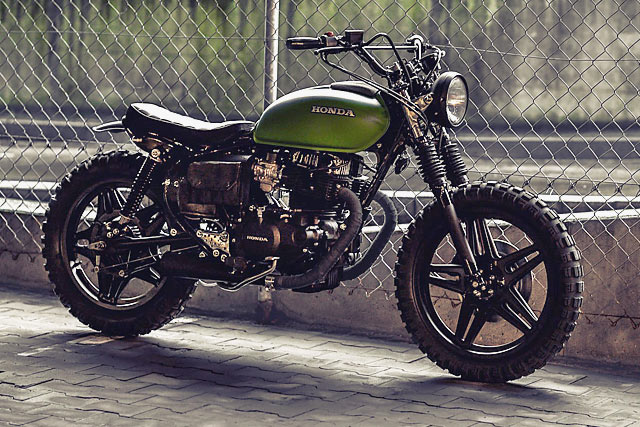 The Iron Curtain. The Cold War. The USA v the USSR. The 60s and 70s were tough years for Eastern Europe. With hardline communism ruling the roost and the Nazi occupation still fresh in most people’s minds, it’s little wonder that a movie like Steve McQueen’s The Great Escape with its Polish locations and flying moto finale, might have struck a chord with the locals. After all there’s nothing quite like sticking it to The Man, whatever side of the fence they may be on. So to celebrate the classic movie, Warsaw’s Jasin Motorcycles have just released this little soldier from captivity. Meet their tough Honda 1983 CM400 escapee. “I build custom bikes because it gives me a little freedom of my own,” says Jasin’s Tom. “My favourite styles are from the 60s and 70s, especially vintage moto-cross and brands like CZ, BSA, Triumph, Bultaco and especially old Japanese bikes like Hondas.” For this build, Tom says he was aiming his sights at the perfect mix of street tracker and flat tracker styles. [superquote]“Nazi’s riding Meriden’s finest? Poor old Churchill would be spinning in his grave at the very thought.”[/superquote]

“The bike which I have chosen this time is a Honda CM400 from 1983 with a very reliable 30hp twin. This time I decided to build a bike in a military style; the main inspiration for the build was the awesome movie, ‘The Great Escape’ with the king of cool, Steve McQueen.” And while the choice of a Honda base may seem at odds with the Triumph McQueen rode in the movie, you’d best remember what an odd choice the Triumph actually was in the movie’s original context. Nazi’s riding Meriden’s finest? Poor old Churchill would be spinning in his grave at the very thought. “The process of building a bike was largely the same as my previous projects. First, I disassembled the bike right down to the last screw and planned out the build. Secondly, clean everything. Then I reworked the frame and completed all the other major engineering tasks. I sourced a brand new set of Continental dirt tires, a classic Honda tank painted in a green khaki colour and added some tailored material details.” With black chosen for the frame colour, a new seat with Alcantara leather was sourced, along with some higher ‘bars and a small fender in the rear. No front fender? Who needs one when you’re soaring 12 foot over a barbed wire fence? But not all of the Honda’s mods are as in-your-face as these. Short, subtle exhausts are nicely tucked in under the black-on-black saddlebags and the drilled-out engine components, pegs and levers. “Every custom part of the motorcycle was handmade, Right down to the aluminum side fairings. I couldn’t skip a little Polish accent, so I painted a Polish checkerboard flag on the rear fender, too.”

“To ride the tracker on the street, I needed to put the required plates and lights somewhere.” Looking perfectly positioned, Tom mounted a new black headlight up front and positioned the plates and it’s associated electricals on the bike’s rear left side. Of course, the whole performance is on a similarly high level; everything has been done at 100%. This is a Honda that is light, dark, shapely and it has claws, too. As a testament to the harshness of the Honda’s former life, Tom says that the engine was nigh on impossible to get clean. “I hate degreasing at the best of times, but this one was crazy. If I never had to clean another engine again, I’d be a very happy man.” “In the end, the tracker looks exactly how I wanted it to. It may sound a little clichéd, but when I go for a run on it I do feel a little like Steve on his Triumph.” For the sake of the Polish Police, let’s just hope Tom keeps both wheels of the Honda on the ground.