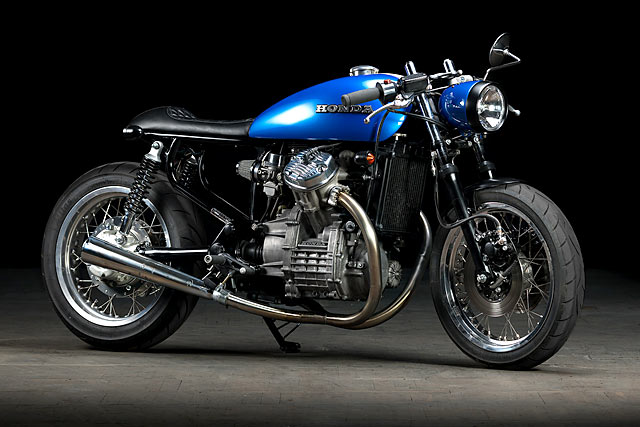 For millennia, the small central European nation of Slovenia has been at the crossroads of the varied cultures that dominate the continent. But despite adopting diverse influences, its population of just two million people remain proudly independent and it’s clear of late something has been stirred into the well of one of the most water rich places on earth. And that thing is speed. Punching above their weight in the custom bike scene, Boštjan Lukežič decided it was time to join his countrymen and with their help he’s finally here. From the remains of a 1978 Honda CX500, he’s crafted a classic cafe racer to rip the roads from the Alps to the Adriatic. Giving Boštjan the impetus to build a motorcycle with road friendly manners was the development of his wild Mini Cooper that is now for racing only. Powered by a tuned Hayabusa engine with a full cage, massive carbon fibre wing and slicks it’s not the most practical form of transport. Being his first bike build Boštjan used the skills he’s acquired wrenching on his Mini and some help from fellow Slovenians to get underway. “Quite a bit of inspiration came from Krakenhead custom bike shop from our country. I love their bikes and took some of inspiration from their builds.” But first he had to find a bike and with CX500s hard to spot he headed for Germany and found the ’78 model just begging to be customised. “The goal was to create a CX500 based cafe racer with good looks and improved rideability. With the CX500 cafe racer craze, I tried to stand out a bit and go a different way than the majority of CX500 cafes, while still maintaining the old school 70’s look.” The first step in that process was to cut back the subframe, but unlike most it’s been rebuilt with a curvaceous nod to the original rather than strictly straight lines. It’s all topped off with a diamond stitched genuine leather seat with extra foam for the cafe look.

The big stock tank presents all CX builders with a dilemma, does it stay or should it go, and after trial fitting a large variety of units Boštjan had his answer. The solution comes in the form of a Kawasaki KZ900 tank that’s been fitted with Honda badges to make sure plenty do a double take. But before it was screwed down the seams were removed, all of them re-welded to a smooth finish and a Monza style filler cap installed. But the skilful body work wasn’t complete, the vintage IZH headlight was sandblasted which only revealed a sieve like basket hiding under the layers of old paint. [superquote]“The tank features an outlined racing stripe in cream that’s just enough to break up the blue without being over the top.”[/superquote]

Once again Boštjan got back to work restoring the piece to perfection, taking the time to swap out the glass for that from a Vespa, and creating a flush mount for the digital Daytona speedo and idiot light combination. The colour must be a favourite, grinningly called ‘Sissy Blue’, it also adorns the radical Mini that the Honda shares the garage with. The tank features an outlined racing stripe in cream that’s just enough to break up the blue without being over the top. While the entire frame, swingarm and lower fork legs were all painted or powder coated black. The stance was a particularly important part of the build with the unusual V-twin engine looking anything but attractive when tilted too far in either direction. So instead this Honda makes its move straight down with the rear shocks replaced by YSS items. Up front the strange upper triple tree with built-in fuse holder has been ditched in favour of a full change to CB250 yokes. The front forks are reversed and lowered through the trees but not before they were rebuilt to suit the application. But its the wheel choice to smaller 17s that got Boštjan smiling. ”The part I love the best about my bike are the custom spoke wheels with wider sticky tyres”. With a race car in the shed the Honda had to be reliable and the engine has been completely rebuilt. But to give it just the right sound Mr Lukežič fabricated one of the cleanest set of custom stainless headers you’re ever likely to see and topped them off with Sito mufflers. The leaky rubber gaskets that often cause tuning problems have been replaced and the polished carbs now draw air via a set of pod filters. To keep the look clean all the wiring has been hidden with the bulk stored in the tunnel space of the new tank while the battery finds a home beneath the engine.

The riding position is all business with a set of Tarozzi clip-ons getting you down and out of the wind. Fitted up with NOS switch blocks that are soaring in price and some classic grips, the CX Honda stays true to the understated look the design called for. Also from the Tarozzi catalogue are a pair of their rearsets that have been modified to work flawlessly with the unusual factory shifter. And the dull brake feel has been addressed with a more powerful master cylinder from a CBR. For a first build it’s a real cracker, getting the clean and crisp cafe racer he so desired. But Boštjan’s also quick to point out where the valuable help came from. “Special thanks to Rok from Krakenhead for putting up with all of my questions and concerns for more than half a year,” he smiles. It’s a sign of the tight-knit custom community in Slovenia that keeps on delivering.