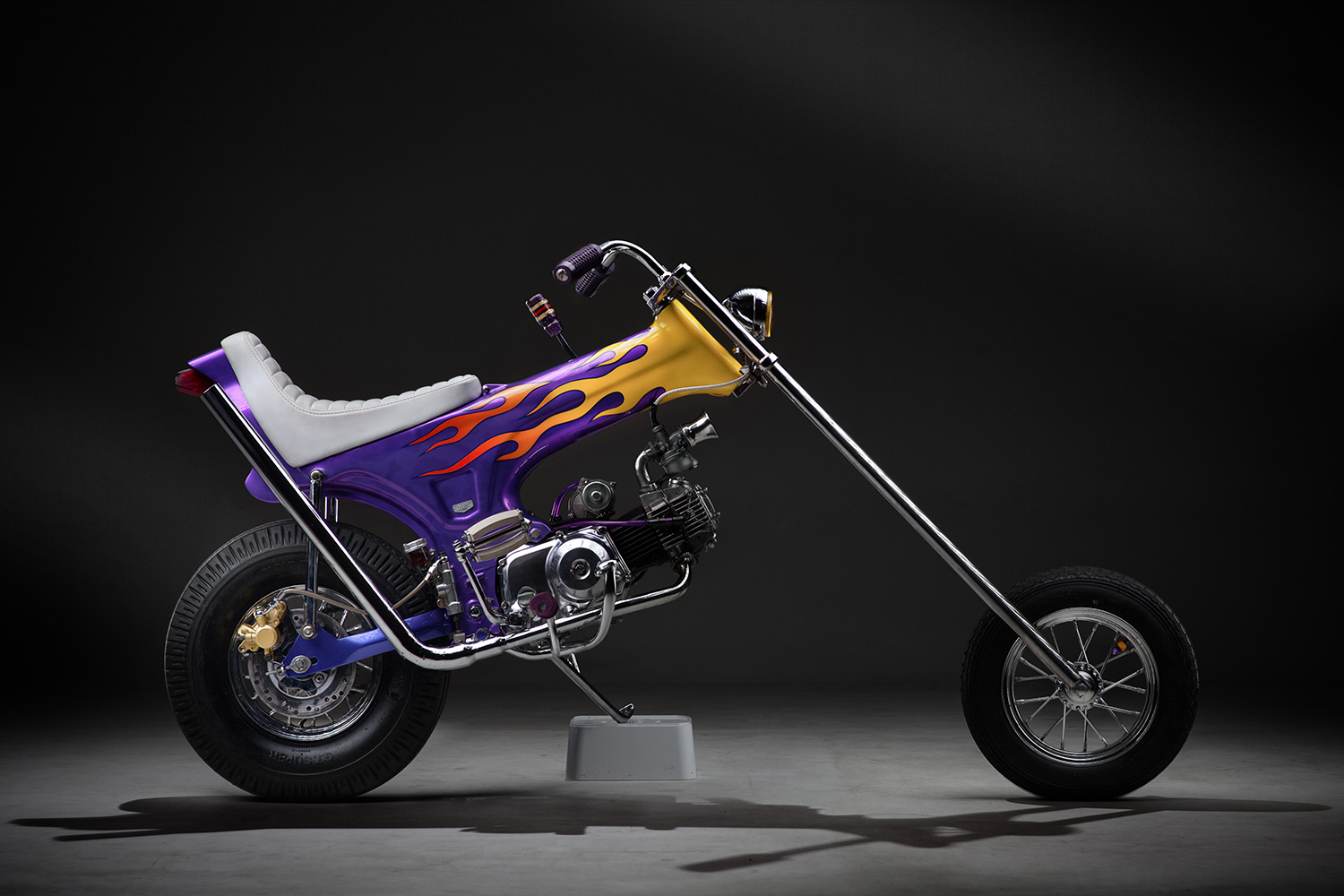 Indonesian artist Muklay produces some wild work. It’s all mental neon colours and insanely demented figures. So when he set out to commission a custom ride he wanted a real head-turner. And he knew just who to speak to — the team at Jakarta’s Lemb Inc. who cooked up this bombastic Honda Dax baby chopper.

As an owner of two other Lemb Inc. creations, Muklay knew exactly what he was getting into when he spoke to the team. This time around he said he wanted a wild mini custom using an old C70 engine he had laying dormant. So Lemb Inc. sourced a Honda Dax frame, swingarm and gas tank and set about sketching out some design ideas. The bike was going to wear a 70s-inspired candy purple livery replete with flames. It’s about then that the team realised the colour scheme mirrored that of Ramone, the low-rider custom from the Disney Cars universe — and the wild little chopper now had a name.

Ramone’s frame was detabbed and all the unnecessary gaps and holes filled in. It was matched to a set of 107cm solid forks with 10” rims at the front and rear. As the bike’s rigid at both ends, beefy tyres running low pressures were fitted to save Muklay’s kidneys from getting pummelled to death on local Indonesian roads.

The rear end was reworked to fit a tall kickback seat, by far the hardest part of the process according to the team. There’s not a whole lot of room on the Dax to begin with, so being able to get a saddle in such a small space required a lot of head scratching.

Lemb Inc. also made up a suicide shifter, with a friend resin casting and colour matching the grip neatly to the rest of the bike. A ridiculously upset exhaust was fabricated and fitted — and that’s about the last part of the process of the build that managed to go smoothly.

The first major issue was the old C70 donor engine. The little air-cooled trooper had finally given up the ghost, with a bent valve and a stuffed piston. Rather than sink time into a rebuild, Lemb Inc. sourced a newer engine from a C86 Honda Supercub. With it fitted and running and little details like the purple grips, footpegs and C100 stoplight all mounted the build was finished. Just in time to be kicked over by some thieves.

Because a collection of vermin doing human impersonations broke into Lemb Inc.’s workshop and pinched all their tools. Thankfully no bikes were stolen, but in their mad dash to grab everything, Ramone got pushed over and the paintwork badly dented and marred. Incredibly, friend of the workshop RSSQ Painting managed to repair the damage. That’s no mean feat when it comes to candy paint.

The end result is a bombastic baby chopper that’s sure to turn heads wherever it goes. It’s gained a hell of a lot of traction on local indonesian websites and print media already. But nobody’s a bigger fan of the mini double-rigid than Muklay himself — who’s just about to commission a fourth bike from the shop. Can you blame him?