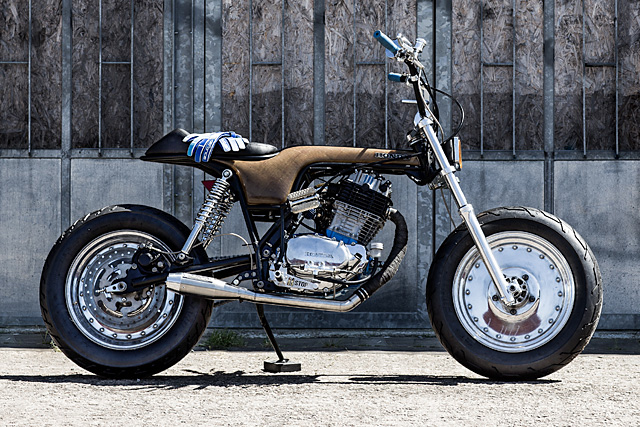 Being the Japan-o-philes that we are, we’re usually the first ones to put up our hands when the eccentric Japanese bikes are wheeled out of a builder’s shop. Whether it be the Motocompo, the Monkey, or the Dax – if it looks manga, we’re usually gaga. So imagine our reaction when we first laid eyes the very latest build from tré cool builder Karl “Ed” Renoult and his ‘Ed Turner’ Motorcycles. A Honda XLS 500 that’s been customised to look like a Dax? I’d be lying if I told you that we put on giant robot costumes and danced crazily to J-Pop, but I really wished we had.

The story starts as many labours of love often do. The unloved ‘79 Honda XLS 500 in the back of the shop that Karl just couldn’t figure out what to do with. Then it hit him; the power of a big single matched with a tough but playful aesthetic would kill it. Sure, the chassis would require a lot of attention and those ridiculously skinny wheels do really sting the eyes, but still. “I had zero time, and zero budget,” says Karl. “So naturally I started immediately.” “Once the frame was naked, I was surprised to find some rather attractive curves. For once, the rear part of the bike’s frame will be kept, although i’ll admit to modding it just a little.” But the major frame work came from a rather unexpected source –  Karl’s first ‘front loop’. The idea was simple. Channel the spirit of the original Dax, but up the ante with an adult-sized machine.

So while E.T.’s trainee Alexis was working hard to resuscitate the engine, Karl bent and assembled the bike’s first new tubes. A few hours of welding later, the engine was on and the bike has been shod with solid and polished HD wheels. “It already looked good and won all the votes in the workshop.” Next up, the forks. “Rummaging around, we finally decided on a set of BMW R65 tubes in Yamaha XV750 sheaths, with home-made fork bridges and a Ténéré caliper. It worked, and it cost exactly nothing.” The light, supplied by Karl’s buddy Joe, was free-of-charge. And the rear light? “It was offered by the prison administration and mounted on a skate truck that was wrestled from a kid on my street last season,” And no, we have no idea what he means by ‘prison administration’ means, either. Those crazy French!

“The engine received all the necessary care before a coat of Ford V8 blue. Then we added a few parts for a ‘drag’ feel: a hand-made exhaust pipe, some aluminium controls, a sprocket cover with a flame cut and a bike’s pedal as a kick starter.” Then, after making the hidden fuel tank (see the last pic), Karl whipped up the Dax-like poly half-shell fairings that are directly inspired by the helmet gifted to the shop by hip Brit helmet makers Hedon. A few Googles revealed that the material Hedon used was prohibitively expensive and very difficult to obtain. The obvious alternative? A potato sack. “It was much more in tune with my finances. So the model, mold and poly were again made by Joe. The guy knows resins very well, but he’d never tried using burlap – until now.”

“We purchased the stuff in a much more feminine store than we were used to. We had a good laugh when the saleswoman yelled ‘MIREIIILLLE! DO YOU STILL HAVE SOME BURLAP FOR THESE TWO YOUNG MEN?’ across the store.” The final touches were simple – some black satin epoxy on the chassis and assorted parts, two beautiful Avon tyres and a few small handles to complete the overall vintage look. And what a look it is. Now if anyone wants us, we’ll be taking this to the beach and reenacting our favourite bike scenes from Fury Road.