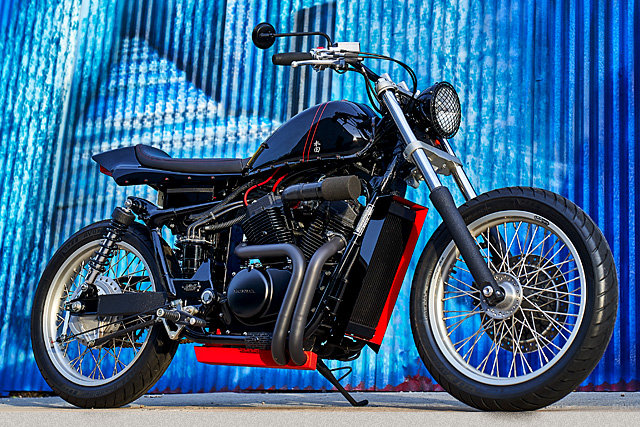 Only those who’ve been on the receiving end of customer feedback will know the pain. Not, ‘my coffee’s too hot’ or ‘I asked for extra anchovies,’ feedback. Think non-binary, creative feedback. Architects know it. Graphic designers know it. And unsurprisingly, custom builders know it. Or as New York’s David Seidman from ADS Motorcycles puts it, “People can tell you what they don’t like, but not what they do like.” And in the case of this ‘Plan-Z’ Honda VT750RS tracker, Plans A, B and the rest of the alphabet were tried and scrapped before the bike – and David’s patience – was deemed finished. Can you feel the pain?

“I’m a one-man shop,” says David from his New York base. “People want me to build their bikes, not a crew. I work with the client to let them be part of the building experience. This adds a lot to the new owner’s involvement in a machine so they can rightly feel, at least in part, that it was created by them.” Sure, it’s a good idea in principle, but with this bike things got a little out of hand… and then they got a LOT out of hand. As always, we asked David what style of motorbike it was. “At one time, it was all of the above plus a few extra.” Think he’s joking? Read on. “Right now, given the seat and bars, it’s closest to a street tracker. But maybe the under-frame muffler makes it something else… though I’m not sure what.” The donor bike was a 2010 Honda VT750RS (aka ‘Shadow’), a slightly ‘sporty’ cruiser-cum-Harley Japanese knock-off that went largely unnoticed unless you were a retired dentist or someone who really likes Ricky Martin. The bike was supplied by the creative and enthusiastic customer that David knew wasn’t short of cash. They clearly loved the VT’s engine, but not much else. “We started out by deciding to make it a sportier sport cruiser. The foot pegs and controls were brought back a bit. A single seat was installed and set up a little higher. We kept the fat rear tire, chopped the rear fender so you saw more of the rear wheel, and firmed up the suspension.” But this was just the beginning. The next incarnation was something close to a UJM configuration, intended to be a more comfortable all-rounder. “The foot pegs and controls were moved farther back to be under the rider’s butt so he could put some weight on them for better control. A long, flat seat let him move around for comfort. We got rid of the cruiser-styled wide rear rim and tire for some narrower ones. The front rim and spokes were then made to match the new rear. The forks were dropped a bit to quicken the steering and the handlebars were changed, along with its controls.”

[superquote]“Then came the inevitable cafe racer. It looked pretty good, but he changed his mind on the riding position.”[/superquote]

Then came the inevitable cafe racer. “I made a sleek fiberglass seat cowl that incorporated brake and taillights. We tried clip-ons but they hit the tank, so we went for clubman bars which had to be widened at the base to use the stock mounts and to give a more comfortable angle. New exhausts were routed on each side with classic pea-shooter style mufflers. It looked pretty good, but then he changed his mind on the riding position.” “A street tracker seemed to be a sensible compromise of all that went before, so I changed the Honda’s seat, cowl and used a set of flat track bars from Richard Pollock at Mule. Next I added sight gauges to the tank and a new air intake system along with a Motogadget speedo. We originally had traditional upswept exhaust pipes, but it got in the way and neither of us liked the look. So I adapted an under-frame muffler originally made for Sportsters by my buddies at Ryca Motors. It really made the bike by tying it together. It also forced us to stop, as there wasn’t much else left to be done.” We’re guessing this is also when the therapy started. “From a builder’s point of view, making so many changes is both good and bad. The good part is that I bill for my time. Also, by spending so much of that time on one bike, you really get to know it, making each change that much easier. The downside is that as a builder, you want to create something and say, “Here it is,” and not, “Well, what’s next?”

But there are some clients that love the building process, the coming up with ideas and the hanging around the shop, so that the end result is almost secondary. Even so, we’re both proud of what we did.” After all this, the ‘Plan-Z’ is up for sale and the two are on to their next project. “I love the guy; he helps keep me in business and he is one of my best clients, but in some ways he’s also one of the worst.”

All of that aside, what does David most like about the Honda? “I love the pipes most of all. A cool feature is that they have a series of inserts so you can adjust the exhaust note. My favorite details are the bottle opener that doubles as an engine-case guard, and the tank’s sight gauges. Also, the ergonomics are spot on for a six footer, and it handles brilliantly; you’d never know it was once a cruiser.”