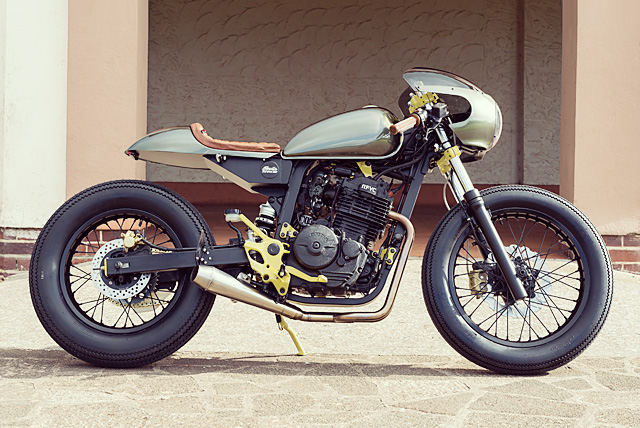 You’d think somewhere in Bavaria would be a workshop producing the best custom BMW R series bikes around, no doubt there are some great ones, but from a seaside town in Devon, England, Kevil’s Speed Shop could lay claim to being the best out there. Headed up by Kevin Hill who has been in the game since the 1980’s, the steady supply of stunning BMW customs coming from the shop is incredible; we’ve featured six of them here on Pipeburn. But there is more to the Devon outfit than Bavarian brilliance “we are also turning out well polished and well-priced custom smaller capacity Japanese bikes,” explains Kevin. So to show just how good they are at doing that they’ve picked one of the most bland and vanilla commuter bikes of the last twenty years, a 2000 Honda FX650 Vigor and turned into a gorgeous custom, Kevils MOTO #8, that has all of the shop’s magic and has been given a complete new lease on life. Described by MCN at the time of its release “The Honda FX650 is a fairly joyless machine that barely redeems itself as a reasonably efficient commuter”. So not exactly a glowing review and they say you can’t make a silk purse out of a sow’s ear but nobody told Kevin and his team. So while the Vigor is essentially a heavier Dominator with a focus on commuting, under the skin are plenty of goodies. That great thumping single that has made the Dominator so popular is there, lightweight and plenty chuckable and of course that all important Honda reliability. “I purchased this particular donor from a school teacher in North Wales who was using it for his daily commute, the bike was low mileage having only covered 15,000 miles since new 1,000 miles a year for a Honda it’s only just run in”. As with all Kevil builds, parts are not simply bolted on but the whole bike stripped down and rebuilt to ensure brilliant quality throughout. With the bare frame up on the stand a new rear subframe was crafted that better fits the styling the team were going for and drastically cleans up the tail end appearance. The frame and swingarm have been cleaned up and finished in black with a numberplate holder slung low on the right side of the swingarm. Being a monoshock design there is no need for mounts to be part of the subframe so a box style section was fabricated that supports the seat and rider while also making a perfect place to hide electrical components. Extending rearward the underseat section is filled out all the way to the edge of the fibreglass with battery box matching metal in black so that there is a uniform finish to the frame, subframe and all the associated metal work. Perched neatly on the new rear section is a traditional cafe racer fibreglass seat unit that topped with the brown leather cushioning is about as far away from the standard Vigor two up seat as you are likely to find. When it came time for a tank the obscure FX650 unit was never going to work and Kevin was looking for something that you don’t usually see fitted to a Honda 650. “The tank was taken from a Suzuki 125, we have dozens of tanks on the shelf which I have purchased over the years from EBay or auto jumbles for such a project”. It’s a perfect match for the cafe racer appeal of the bike but its small proportions revealed more of the headstock area than Kevin was hoping for. The solution is found in a retro bikini fairing that along with the neat tinted screen accentuates the clean lines front to back. “It gives the impression of stretching the bike forward giving it a sleeker appearance.” With the body work taken care of it was time to find a colour that would suit the look and style of the bike and the solution was found in the form of a Classic Fiat 500 hue Kevin had seen on Facebook months earlier. The metallic green is retro cool without being over the top and the lemon yellow paint applied to the triple trees, pedal and engine mounts help pick up the sparkle in the classic green. To offset that appearance the engine has been given a tough look that goes back to the roots of what a Honda single is all about, purposeful! “The engine has been coated with an American industrial finish, heat proof and wrinkle finish to give the bike some texture.” The engine is of course Honda’s big single 644cc air-cooled thumper that fitted to a bike around 150kg will pull in any gear with very few RPM on board. An all new exhaust has been fabricated in-house, a full stainless system and stainless reverse cone silencer, that runs neatly under the engine and then exits just under the new numberplate holder. With the airbox removed and the new exhaust fitted, the 40mm Keihin carb has been re-jetted to ensure a smooth running engine from idle right through the rev range. The engine case breathes through a pod filter doing away with the clunky standard system and the result is an engine that will give years of absolute joy. With the Vigor designed to be a commuter bike rather than the more adventure orientated Dominator it shares so much with the suspension is not miles high but was never the look Kevin would be happy with. So to get the suspension right, a high quality YSS rear shock not only stiffens up the rear end but adds the sort of adjustability you need to set a bike up right. With the rear end sorted the stock telescopic forks are lowered through those lemon coloured triple trees until the stance is just right. The blacked out spoked wheels are all business and have been wrapped in vintage Firestone style tyres to match the retro look. Steering is no longer done with big wide bars but with clip-ons pulled back like an ole racer and a set of new footpegs in black are fitted up to the lemon yellow mounts. With the clever under seat box holding the bulk of the loom, electricals and battery the Kevils MOTO #8 retains the clean and quality finish we’ve come to see with all the bikes from the Devon based shop. An array of LED turn signals, new headlight and tail light mounted under the seat take care of the legalities. While the stripped back bike just needs a single gauge with idiot lights providing the only information you need from a bike that provides so much feedback to the pilot in the way it rides. With the bike finished it was off to the Malle mile were it received a great welcome and now the build calls the Bike Shed in London home, on display and awaiting a new owner. At just £6,500 you’re paying entry-level new bike money for Honda reliability and a machine built by a shop known for its incredible quality customs; it’s no wonder the custom scene is taking off and even Honda’s shy FX650 Vigor isn’t safe!