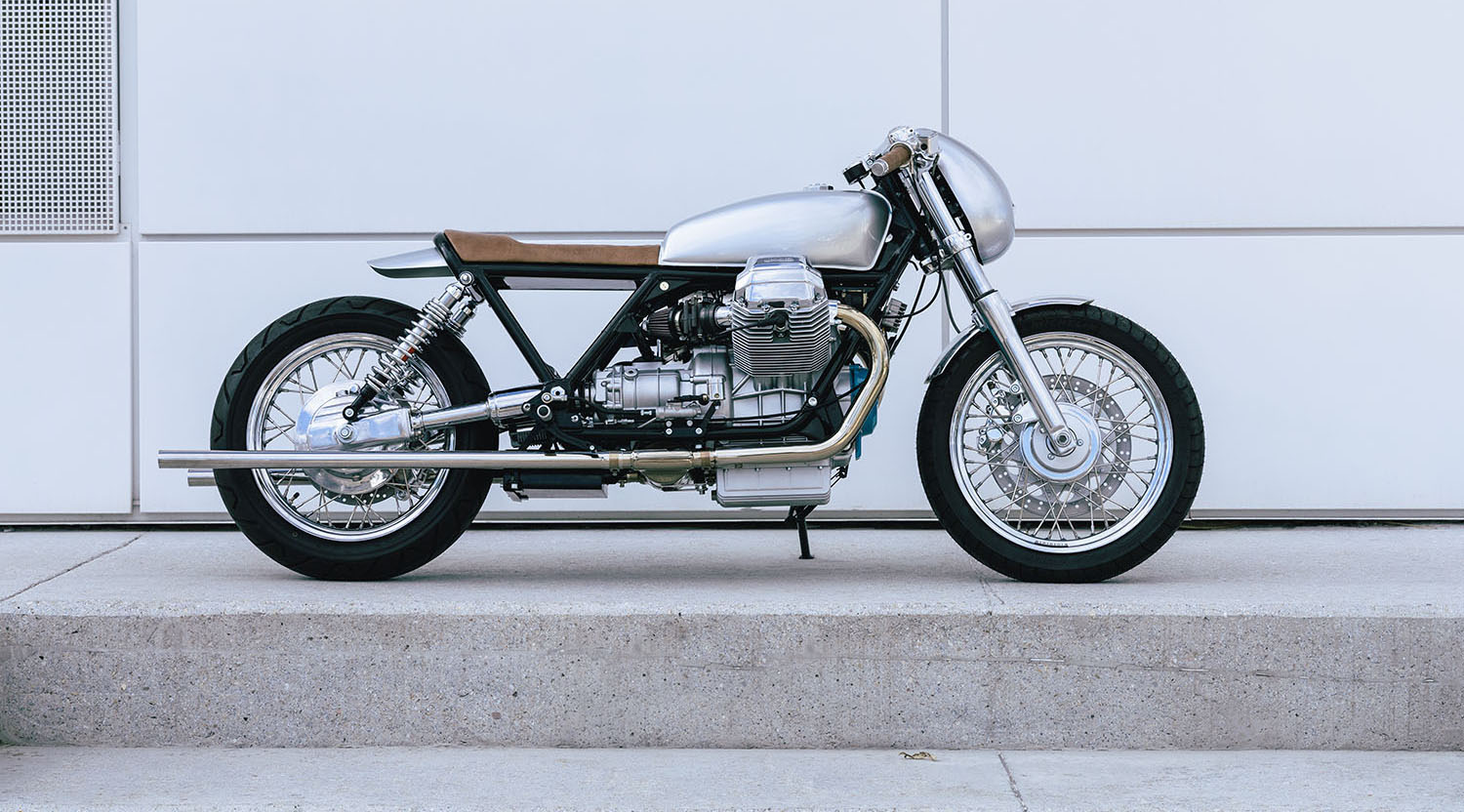 At any one time, there are tens of thousands of custom bikes being built around the world, and for those entrusting their build to a workshop, there can be the full spectrum of experiences. As a customer, you’re not only handing over your bike and hard-earned money but leaving your dreams in the hands of largely unknown others. Usually, we focus on the end result and the bike itself, but when Poland’s UNIKAT Motorworks sent us over their latest incredible creation, it proved the perfect chance to hear the journey from the owner’s point of view. And he’s one lucky man, as he rides off in style, on one incredible Moto Guzzi California and an experience he’ll never forget.

Like so many, two wheels came early in the life of Pawel when his Grandfather bought him a mini bike and he set about personalising it with stickers, lettered tyres, and chrome trim. When adulthood arrived the bikes started to flow and he thought he’d hit the sweet spot when he finally had a Harley parked in the garage. But then came an ever-increasing presence of custom bikes on the road, and his curiosity turned to a search for just the right workshop to build him a bike…, but which one, there were so many.

“I once read that there is a place in Wrocław that is quickly gaining recognition because of the projects it puts out of its garage. When I arrived at their doorstep, I met the team, Grzegorz, Michał, and I knew that this is a place full of passion, professionalism and this is how we’ll build a brilliant project.” With everyone at the table, they discussed everything from the choice of donor bike, to budget and the deepest technical aspects of a potential build. With everything worked out, the hunt was on and this Guzzi California 1100 tracked down.

But the instant it arrived inside the UNIKAT workshop, the boys were ripping it to pieces, and when they were done the only parts that would remain were the engine and a portion of the frame. “We completely changed the geometry and design of the original frame. This required us to shorten the front suspension,” the guys tell us. Not only are the forks lowered internally, but the legs and triple trees have been polished within an inch of their life.

At the rear of the bike, the frame modifications are both visual, to shorten the subframe with an upsweep, and structural, to fabricate new reinforced shock mounts. It’s to these that a custom length set of Bitubo shocks are bolted and the end result is long and low California. To maintain this aesthetic, the top triple clamp was relieved of its risers and a set of clip-ons designed for the job. With the seating position already determined, this meant the footpegs now made for an uncomfortable ride, so custom rearsets and some seriously cool linkages solve the problem.

For the bodywork, that long and low look called for completely handbuilt pieces and Tomasz started with a tyre hugging blade for the front fender. Above he hammered out and rolled a swooping mask for the cowl, which hides a small LED headlight and the rear fender falls from the new subframe. To pull the lines of the custom tank in tight meant a rethinking of the entire fuel system, with the tank holding the essential fuel pump and the pressure regulator installed remotely as part of a new fuel system.

With the absolutely flawless paintwork in the ever-reliable hands of Marcin, the rest of the team grabbed one part after another and took care of any imperfections, before polishing everything to a mirror shine. Chrome was used on some of the larger pieces and absolutely every nut and bolt was either re-galvanized or replaced with a brand new item. But the design brief called for more than just looks, so the engine and transmission not only get a total detail but have been completely rebuilt internally.

To add some wow factor to an already incredible machine, the exhausts get the low rider look and pod filters let the intake raw. A new loom was built from scratch, the wheels are big buck Borrani items and the finishing touch comes from the stunning seat and grip hand-stitched leather combo. The bike is a work of art, but ultimately the only opinion that really matters is Pawel’s. “The design was great, but it was the execution that knocked me off my feet. Perfection and pure design in every element. The motorcycle impresses with its light, simple, yet detailed design, as well as with the technical solutions.” It’s safe to say he’s one happy man and really, who wouldn’t be with such a stunning machine to call their own.