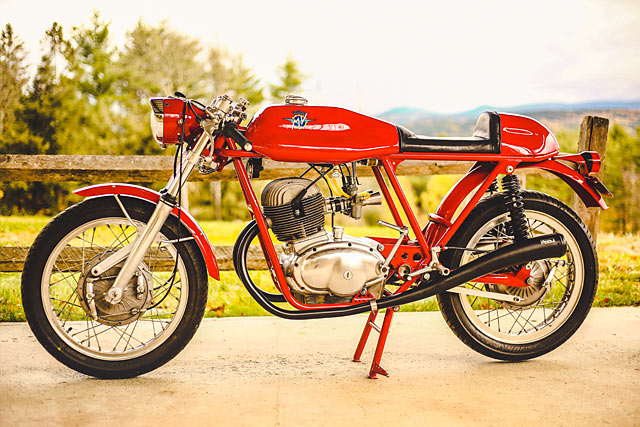 There’s more than a few Italian moto designs that are so close to perfection, only Tamburini himself could improve on them. It seems that every line, bolt and curve was placed by the hand of il Dio himself. So to set yourself the goal of restomodding one is tantamount to tweaking the Mona Lisa or restoring the Colosseum. And for it to happen in Vermont – of all places – seems even more surreal. Yet that’s exactly what local retiree and self-confessed internal combustion freak John Stewart has done. 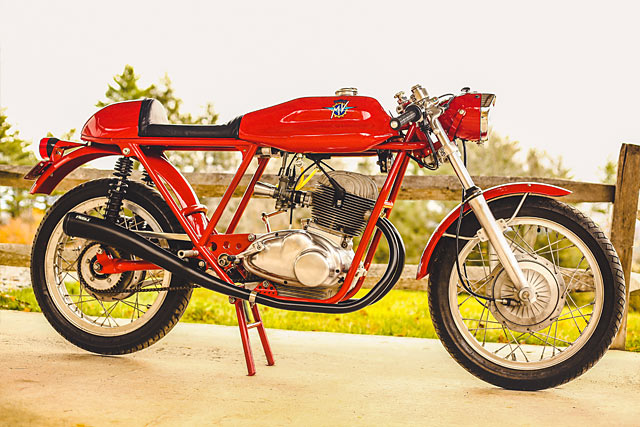 ‘I have been a motorhead all my life,’ says the now-retired John from his idyllic Vermonter man cave. “If it had an engine on it, I wanted to play with it. Like most of us, my first introduction to motorcycling was minibikes. The first ‘real’ motorcycle I rode was a Honda Sport 90. It was owned by my sister’s boyfriend at the time. I’ve had various bikes over the years, but knowing that I can’t have them all, I have concentrated on Italian twins from the 70’s. My shop currently occupies the first floor of the house; we have recently downsized, but I still have a few bikes, a small metal shop and a pool table.” Let’s hope he’s on Airbnb. 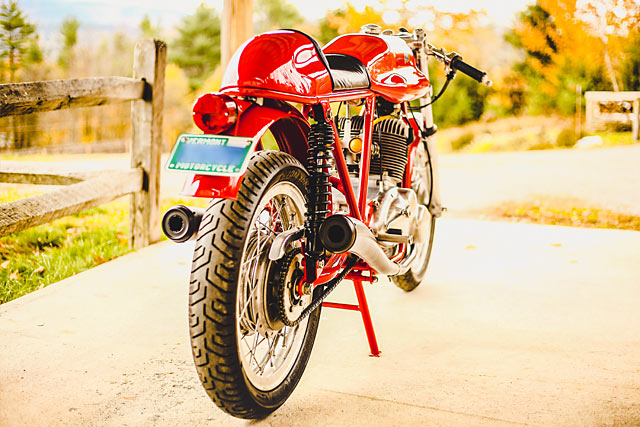 The donor bike was a 1967 MV Agusta 250B. John’s brief to himself was to create a period cafe racer that could have been built in the late 60’s early 70’s. “I purchased the components from a friend in Colorado; he was going to build a bike around them, but he changed plans.” Far from being a rideable machine, the purchase primarily consisted of the motor and wheels, along with a few oil-stained boxes of old bike bits.” 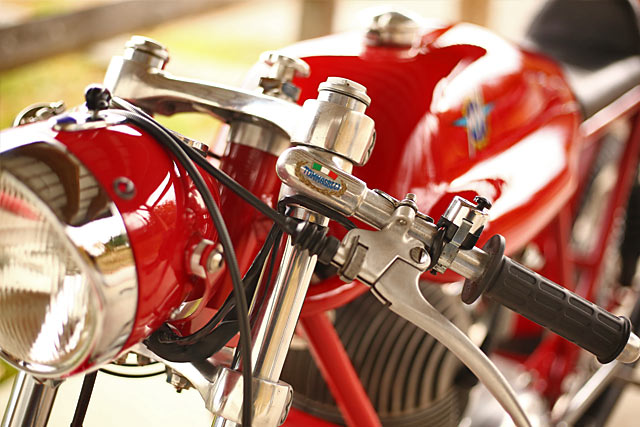 John goes on to say that he wanted to build a bike that he could enter in a Moto Giro event. With visions of a small, early Italian motor in his head, he chased his friend for more and soon he was looking at a picture of the actual block in question. “As soon as I saw the motor, I knew it was the starting point. I consider the motor to be a beautiful design aesthetically: it has smooth, rounded lines and there’s not a sharp angle in sight. I designed the rest of the bike with these elements in mind. Not having the frame or any of the bodywork, the design of the rest was an open book. Visions of MV’s Disco Volante and Ducati’s 900ss Imola filled my head as I designed the tank.”

[superquote]“Visions of MV’s Disco Volante and Ducati’s 900ss Imola filled my head as I designed the tank.”[/superquote] 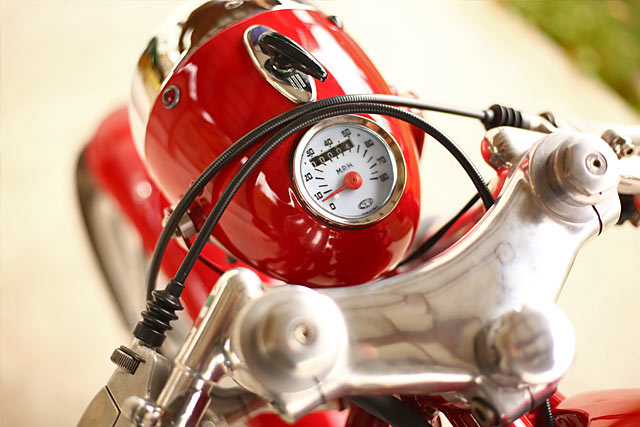 “I started the build with a few priorities. Firstly, I wanted a full-duplex cradle frame. Secondly, I am a large guy at 6’2″, so I wanted to stretch the stock dimensions a bit. Thirdly, I had to use Magni’s beautiful curved mufflers. Lastly, the gentleman I acquired the bike from had machined a lovely eccentric swingarm pivot. He modeled it after an MV Racing bike unit. I had to use that. The frame is constructed out of 4130 tubing. The bodywork is all aluminum that was formed over a wooden buck and the fenders were made out of blanks I had obtained along the way.”

The wheels are the MV stock 18″ Borranis; John didn’t have the stock front forks, but he considered them too spindly for the build anyway. Then another friend offered up a set of 35mm Ceriani units. I think we all need friends like John’s. “I was then lucky enough to find some period Tommaselli handlebars and controls, and NOS CEV lights. I fabricated the steering damper and knob, light brackets and center stand. Then a local race car fabricator helped me with the exhaust headers.” Amazingly, they only made one bad one before they got them spot on. Most of the clearly minimal wiring is hidden in the frame and John notes that he used a modern solid state regulator. 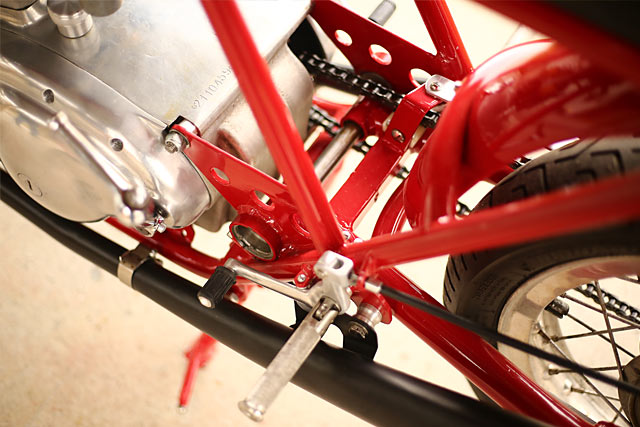 “The Italian leather seat turned out to be the hardest part for me. I have never worked with leather before and I soon found out that I didn’t have the proper equipment to do the job. I ‘wet formed’ the leather on a mold to get the front to blend with the tank. My daughter has an industrial-strength sewing machine and she helped with the stitching. It turned out ok, but it might get a second go around at some point.”

“It’s hard to say what I like best about the build,” says John to finish up. “I would love to tell you how well it handles and goes down the road, but to be honest it’s only been ridden on a few short tests. Now winter is here and dialing it in will have to wait until spring. I do like staring at it however. I am really pleased with how the lines turned out. Other than the seat, there is nothing I would change.” 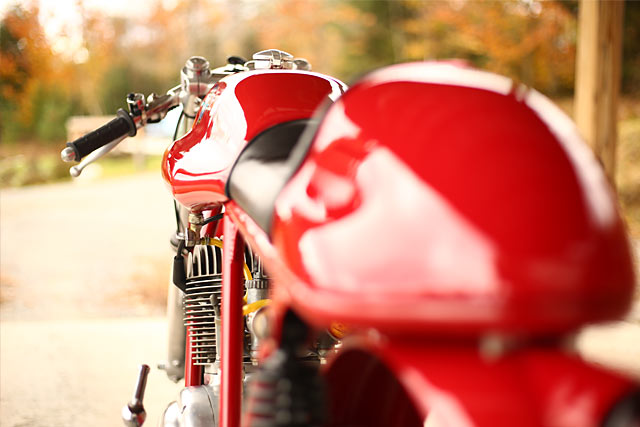