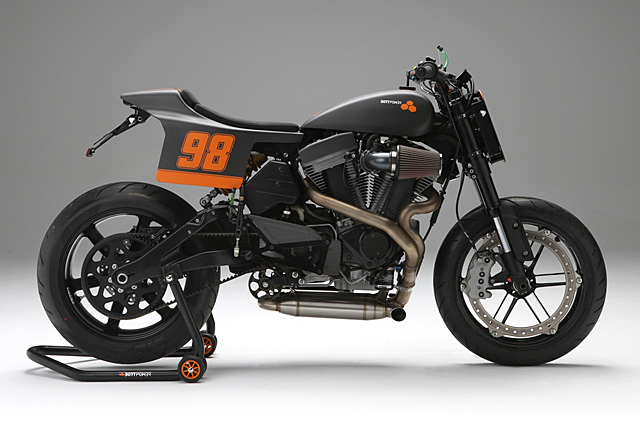 NASCAR’s a funny old sport when you think about it. While the whole four wheels thing can be a little bit of a turn-off, I’d be lying if I told you that I didn’t get a buzz out of all forms of motor racing – no matter how many wheels are involved. While any form of racing that involves a Toyota Camry painted with a rainbow M&M’s motif should ring alarm bells in any adult who’s not tripping balls, the whole gladiatorial angle really appeals. And clearly, I’m not alone. See, Spain’s Bottpower and their chief engineer David Sánchez have come out in support of the old ring o’ noise with a bike built for NASCAR driver and ex-World Superbike racer Eric De Doncker. First, a little homework. The Bott ‘XR-1’ is a sportsbike with flat tracker aesthetics that’s built by David and the team around a Buell XB12 donor bike. The bike weights a svelte 179 kgs (or 390 pounds – which is 20 kgs less than the Buell XB12 SS it’s based off) and has 100 HP with planet-loads of torque. Apart from the top fuel tank, it has another one under the rear shock absorber which gives its rider a very useful total fuel capacity of 13 litres (or 2.5 gallons).

The Bott’s XR1 chassis has been designed and built keeping the original Buell XB geometry intact, so it has the same on-road behaviour but with improved performance as a result of the weight reduction. The bike’s frame stiffness has been calculated using a technique called Finite Element Analysis, and the finished design has been thoroughly tested by riding the bike at eleven tenths on race circuits with professional riders. Now for the specifics. “Here you have the latest BOTT XR1 that we just completed,” says David. “The bike has been built on order for Eric De Doncker, a former motorbike racer. In the 80s he raced in GP 250, World Superbike and the World Endurance classes. Now he’s a car racer who’s currently competing in the European NASCAR series with a Ford Mustang.” And no, we didn’t realise that there was a European NASCAR series, either. How do you say “beer can hat’ in German? Naturally Eric wanted a simple, clean design for his bike that used the same colors and style of his beloved Ford Mustang cars. The result is this, an XR1 that David and the team nicknamed “NASCAR”. Personally, I prefer “NASBIKE”, but I guess that’s just being pedantic. “When we released the Bott XR1R,” recalls David, “some people told us that they would like to see it ready for the street with some headlights and turn signals. We feel that this bike would be something very close to it.”

And the build isn’t just some ego toy for a rich racer collection, either. The consultation with Eric was extensive, and it’s resulted in some very personal touches including the inverted gear shifter that he prefers from his halcyon racing days. Once a racer… “The XR1 NASCAR is very similar to the XR1R, although in this case the frame is a steel one, and the electronics are standard. But as with the XR1R, the bike has a rear Öhlins shock. The front master cylinder and clutch lever are Brembo. It has a ZTL2 8 piston (!) front caliper, Bottpower triple clamps and the fuel tank, seat and tail have been built-in full carbon fiber.”

“The display is a black Motogadget Chronoclassic, and both the license plate holder and the indicators are from Rizoma. In the left grip area there are some racing buttons that are used for indicators, horn, high beam and high beam flashing.” And of course, the racetrack vibe they impart to the bike’s cockpit doesn’t hurt, either. Nice. All up, it’s bike that just oozes bad-ass-ery and real race ability. We’ve never seen Buells look quite so good as when David gets his hands on them. And to have the pleasure of seeing Eric blasting around Circuit de Valencia on the thing is something that all of us will have to dream about for ourselves when our collective heads hit their pillows tonight. Can you imagine? Hermosa!