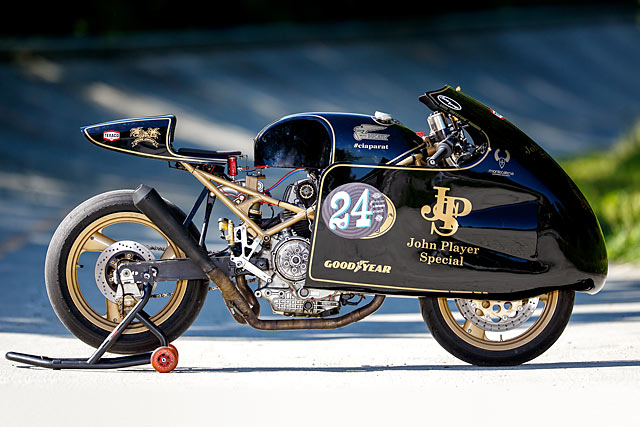 Ah, the 70’s – the golden age of motorsport, manliness and lung cancer. That trio sat at the forefront of F1 during an incredible decade that made legends and took lives. Years later a loose collection of individuals in Italy dubbed the Milano Cafe Racers have drawn inspiration from that period to craft Ciaparat – a gorgeous 1995 Ducati Monster built to kick ass at the strangest racing series we’ve ever heard of. Milano Cafe Racers was formed in 2014 from a loose band of guys and girls who love motorcycles and motorcycling. Mainly a social club, during a get together in 2015 the MCR crew threw out the idea of building a bike to tackle some race meets. The beginnings of the ride that would be known as Ciaparat – a local term referring to a barn-dwelling rat catching cat – was formed. The bike building team was drawn from enthusiastic volunteers within MCR’s ranks. It’s development was headed by Gianluca De Falco, who runs California Racer Garage, while the pilot was to be Sami Panseri, the most skilled rider within the group. With a host of support staff standing behind them the team was set. But first they had to find a bike. MCR scoured second-hand ads around Italy before they stumbled across a battered old 1995 Monster in rough condition. Gianluca rode out to inspect the bike the bike – it was cosmetically very rough, but already tricked out with some tasteful performance mods and above all, it ran well. And it all came at the traditional going price for a second-hand Ducati – fuck all. The team from MCR now had their steed, but more work was to be done on the engine… …Which we can’t tell you about. Because the Ciaparat is still being raced the team are tight-lipped about what tweaks have been made to their air-cooled twin. So you’ll have to sit uncomfortably on your blue balls and admire it from afar. But what you can know is that alongside the usual airbox and exhaust modifications the Monster was outfitted with a full nitrous oxide setup. The next thing to do was to get the bike looking good. A one of a kind custom tank was fabricated by local geniuses South Garage Motor Co that replaced the hunchbacked standard model that puts the Duke in modern territory. Amidst a hail of swearing a truculent carbon fibre streamliner was mounted as well as a cheap seat and a new tail that was dragged away from a local yard sale. The whole bike was stripped down and refinished in a classic 70’s John Player Special colour scheme of gold and black before it was declared ready for one of the coolest racing series you can enter – the Sultans of Sprint Cup held in Monza.

The race focuses on two valve and four valve air-cooled twins run over a short distance drag racing track. Sounds fairly normal, right? Until you read the scoring system –  the organisers award extra points for teams who scare the bejesus out of the organisers, to the crew who are up drinking the latest, and which entry who has the best damn looking bike in the pits. The end result is a grid full of racer every bit as spectacular as MCR’s Monster. [superquote]“It was a happy day for the crew able to take home a flag from their first meet.”[/superquote]

The Ciaparat ran a respectable third, largely due to Sami’s lightning fast right hand as the NOS system spluttered and refused to breathe fire into the old Monster. It was a happy day for the crew able to take home a flag from their first meet.

But the best thing about the experience, according to the team at MCR, was how the Ducati Ciaparat bought the extended family of MCR together. Some people cooked, some helped with logistics, many lent their time and expertise to the build and many more propped up the bar at the race meet. The Ciaparat is their first build, but I’m hoping it won’t be their last.