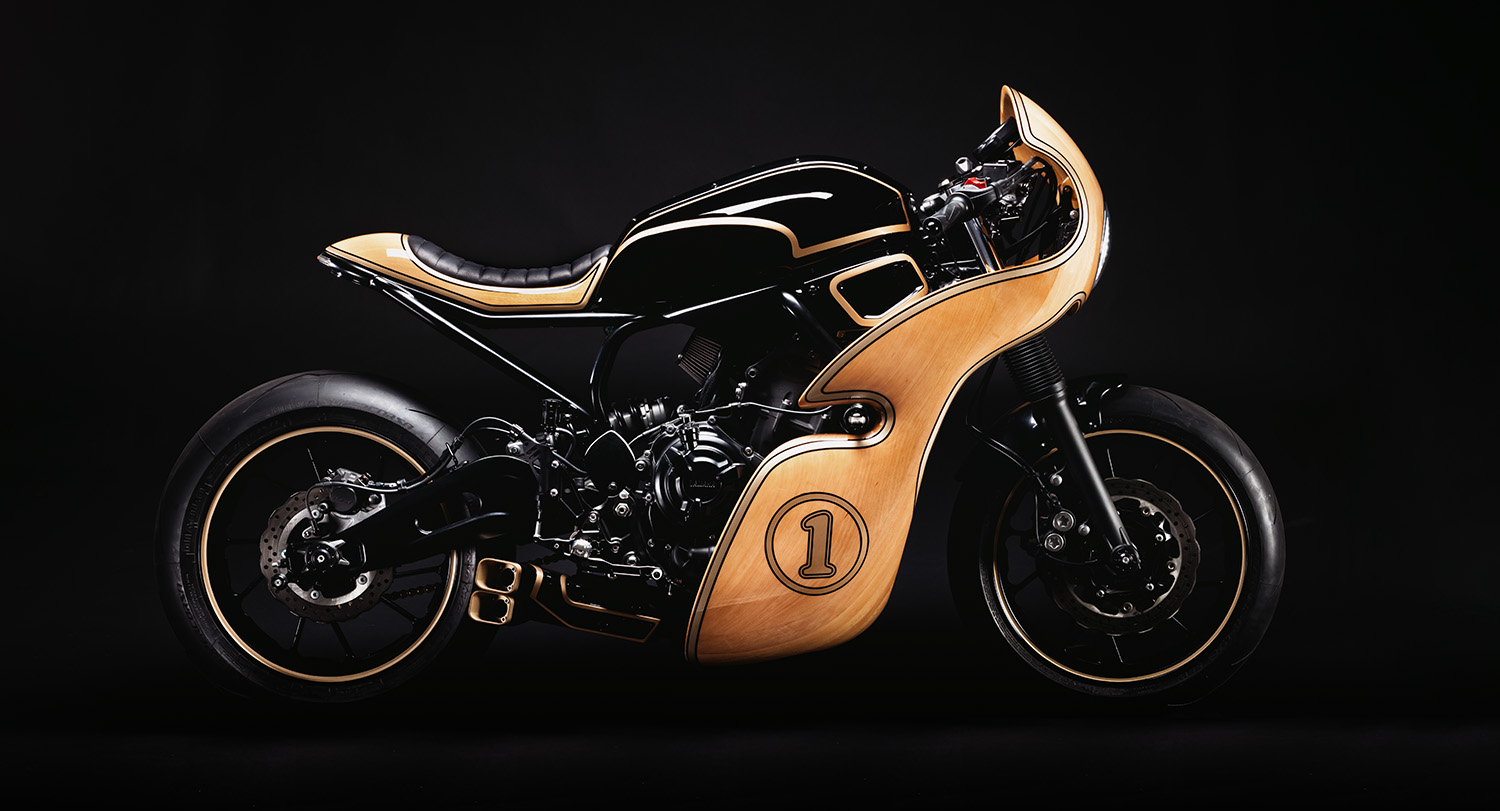 In an industry born on the idea of rebellion and in some cases downright sticking it to the man, most will inevitably still follow the pack. To truly step outside the lines and succeed takes an individual willing to ride alone, but when you’re as talented as master craftsman Sébastien Valliergues, taking on the challenge of the controversial use of wood on motorcycles is a compulsion that cannot be resisted. Under the nom de plume George Woodman the boy from Biarritz has turned going against the grain into an incredibly successful operation. Now he’s stepped it up a notch with a fully faired Yamaha XSR700, using surfboard building techniques, it’s still bound to make waves.

With a portfolio of incredible bikes, some in the hands of the world’s best collectors, it wasn’t long before the big players in the industry took notice of his work. “I already did an XSR700 ‘Hanko’ for the Yamaha Yard Built two years ago. I was not happy with this one that I did too quickly (3 months) and with a lot of stress. So I decided to go back on it and do my best to make a unique masterpiece. It’s new name is ‘Hommage’ and took inspiration from the old race motorcycles with a complete full fairing made of carving wood,” Seb explains.

As a platform the XSR700/MT07 makes a hell of a lot of sense for a modern custom; cheap to buy even new, a fun filled twin-cylinder in an excellent chassis, with the handling to have a blast on any kind of road. But after a few years on the market, even the retro styling of the XSR has become a little cookie cutter and only a major shakeup will truly set one apart from the pack. That’s no problem in the Woodman workshop, as nobody does the kind of work he produces. To prepare the bike for its second incarnation, all the previous mods were stripped back and a new, more audacious design drawn up.

Getting to the main attraction, the full front fairing is made of Beech and is the most uncompromising timber bodywork we’ve ever seen. While Beech does steam bend quite well, its general workability is still a challenge. “To shape the wood parts I did all by hand with mostly a grinder with sanding discs. It was a mad work to do and I cannot say how many hours I’ve spent on it but I can say with no doubt that it is the first and the last full fairing made of plain wood that you will be able to see!” Seb smiles.

Just like a surfboard it is all stabilised with a top layer of fibreglass and resin, holding its form in place and protecting it from the elements. The same process was used on the rear seat that is now topped with a form-fitting tuck and rolled leather seat. But before it could be affixed to the bike the subframe was chopped and hooped for a clean look. The front end was much more involved, “The attachments of the fairing are handmade too, made of steel with black paint. It’s attached to the frame for the low ones with invisible fixations by inserts in the wood. And for the high ones, it’s attached on the cooler fixing points by invisible inserts in the wood fairing.”

Then there are the details you may never pick up until Seb points them out for you to appreciate. The chain guard is made with multiple pieces of wood, bound together with resin and infused with black paint to allow it to blend into the bike. The front fender is made from Corian, an ultra-versatile material created by DuPont that is most frequently used on benchtops, but its durability makes it perfect for this task. With the indicators mounted on custom fixings in the frame and protruding through the side openings of the fairing.

To bring it all to life, the matching paint work had to be of the same artisan quality as the rest of the build. And Jérome Lopez of Colorside has hit it out of the park; from the deep gloss black that allows the timber work to pop, to the hand-laid pinstriping and detail work, it’s flawless! On the scales, the bike doesn’t disappoint either, now just 180kg, down 6 from the stock factory weight. But to improve the handling even further, Seb dove into the Ohlins catalogue and fitted the front suspension with a new internal kit and switched the rear spring out with an item from the Swedes.

To get the rider in the right racy mood, the clip-ons are made for the XSR by S2 concept, with the new rearsets from the masters of performance, Gilles Tooling. More weight saving was found by removing the airbox and replacing the filters for twin units from K&N, while the battery is tiny and relocated under the seat. Painted up to blend in the barking mad Xrace exhaust will spit flames on the overrun and a set of Super Corsa tyres completes the build. The end result is remarkable, George Woodman living up to his name and making the material his own. Now for sale, you could join the likes of the Haas Moto Museum in adding some French forest finery to your collection,