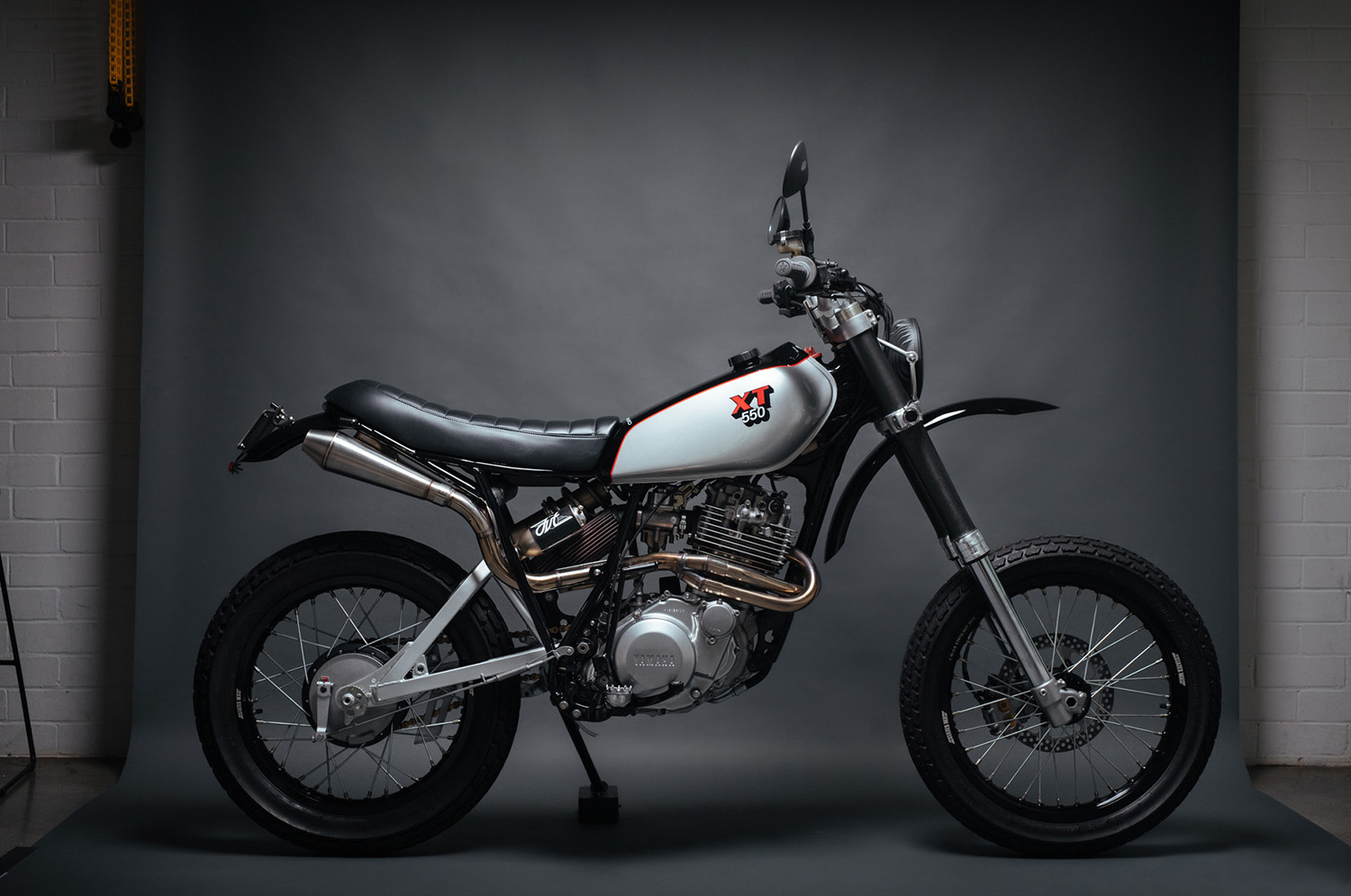 Would you commission a custom build to someone who hadn’t finished their first bike yet? When Francesco Tutino’s good friend and renowned chef Rino found a basket case XT550, he wanted his friend to turn it into something special. Rino is no newcomer to bikes, with a collection of motorcycles ranging from old thumpers to a Ducati Multistrada 1200. His dream was always to have a Yamaha XT550 that was made in his birth year, so when one came up for sale, there was no talking him out of buying it – no matter the condition.

“When Rino purchased this XT550 we had known each other for a couple of years and he commissioned me to build this even before I had completed my first custom,” remembers Francesco. “He trusted me… like good friends do!” When Rino delivered the bike to Francesco he was taken back by the condition of the bike. “It was heavily rusted, sunburned, bent and not running.” But there was one thing on its side – time. Rino was in no hurry for the bike and he also had a healthy budget. So five years later, the bike is finally finished, albeit three times over budget. And yes, they are still friends!

The first day Francesco took it into his garage he played with the dodgy wiring and cleaned the carburettor. With some fresh fuel the bike started – not before almost breaking his ankle from the kickback! Now he knew the bike started it was time to give it a ground up rebuild starting with the engine.

First up he stripped the crankcases and sent the whole lot to get vapour blasted. Then Francesco replaced the conrod, oversized piston, timing chain, all the bearings and seals with genuine Yamaha components. On the intake, the rubber manifolds have been replaced and the carburettors also vapour blasted, rebuilt and tuned to suit the K&N pods and new exhaust system.

When it came to the exhaust, it was always going to be full stainless but both builder and client had different ideas on the design. “I was suggesting a low profile exhaust for different reasons, and would have loved to match it with a modern carbon tipped Yoshi MX muffler, but Rino liked the high profile… we ended up finding a meeting point making a high profile exhaust with double mufflers!”

Because the XT550 is fitted with a monocross type rear suspension Francesco had to consider clearances between chassis and swingarm. Also heat was a big concern for both the battery and the air cleaners. “The only way for the twin exhaust to work was to fit a crossover pipe underneath the seat. This dramatically increased the heat to battery area and the lead pipe was in the way of the right pod filter also a tricky one to being in very close proximity of the rear shock. The solution was fabricating an aluminium shield for the pipe and rotating the right pod filter and offsetting the left pod using some intercooler rubber hoses . Also under the seat I’ve made a heat shield for the crossover pipe and battery tray cover out of carbon fibre.”

Upgrades to the suspension and brakes were made, replacing the old mono-shock with a modern YZF250 unit which needed modification to frame and swing-arm due to different sized eyes, rebuilt and gassed in house. The completely rusted out 38mm forks and undersized single sided drum were removed to allow the USD front end from the same YZF donor. Both the brake callipers and all aluminium components were then vapour blasted, with new disc and pads, combined with a Nissin master cylinder.

To ‘keep it in the family’ he used a tank from its older brother, the 1980 XT250. As for the colour choice, a similar colour to the iconic XT silver was used with all the Yamaha decals. “The paintwork was a bloodbath cost wise and I had some issues finding an honest painter, eventually found Roberto’s Custom Powder who worked his magic on the clutch cover, hubs, frame and the smaller components around it.”

For added safety, all the lighting has been upgraded to quality LED units. Ditching the stock light for a superior KOSO Thunderbolt Headlight – which not only looks good but also stands out from a mile. “It was a bit of a challenge to fit it in between the yokes making a nice and thin aluminium bracket but I think that in the end I got it fairly right.”

A custom warning light housing was fabricated and a Daytona Velona Speedo was mounted on the top yoke. The wiring loom has been shortened, and the original switch blocks have been kept for their user friendly nature. All the electrics have been tucked away under the tank. The lithium antigravity battery is hidden in a custom tray under the seat.

The end result is a very clean and classic styled XT550, with retro metal work, seat, modern components, twin exhausts, upgraded brakes and suspension. No doubt Rino is happy with the finished product – even though he waited a long time for his friend to finish the beautiful build.