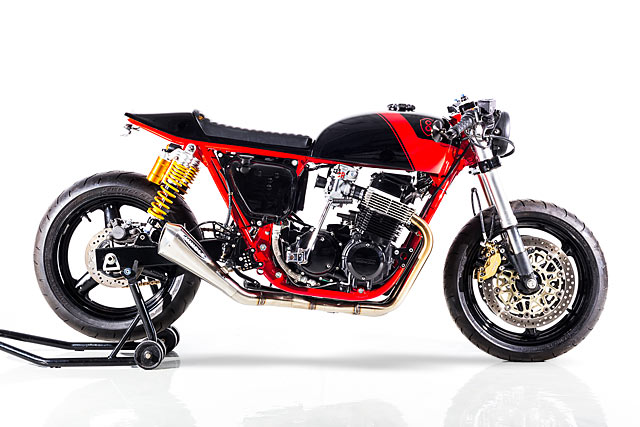 This bike came about by accident, really. About two years ago I made arrangements through a friend to have some wheels trued at this old retired guy’s home shop. The wheels were for a CB550 build I was working on, so when I showed up with them in hand we naturally got talking about old Hondas. About half an hour into the conversation, he walks me to a shed behind his main garage and reveals a treasure trove of Honda CB750s. This bike is the result. There was about five old CB750 engines in various states, ranging from ‘pulled from a lake’ and ‘downright-crusty’ to ‘maybe I could work with that’. There was also three to four frames, various gas tanks, forks, wheels and lots more. He had been collecting for future projects, but instead had changed his focus towards Harleys and British bikes. Fast forward through a negotiation and I ended up leaving with a matching 1971 frame and engine, a gas tank and oil tank. Without a real plan for the build or a buyer interested, I figured I would start with the engine. If I didn’t end up finishing the bike, at least I’d have a fresh engine for sale. With that in mind I tore it down completely, replaced the worn out items, honed the cylinders, added new pistons and rings at the stock bore, added Viton valve seals on the top end and a new Barnett clutch. Since everyone seems to do these SOHC engines in a traditional silver with black barrels, I went the opposite along with a gloss black powder coating on all the case covers. I posted a few shots on Instagram looking for a buyer, but I got no responses. Maybe I would have more luck if the bike was rolling? I found a guy on Craigslist with a complete CBR954 front end that I swapped some Triumph parts for, but after the deal was done I found there are no direct conversion bearings for that steering stem in this frame. I did happen to have an ’81 CB900 steering stem kicking around and there are bearings for that conversion, so I pressed out the stock stem and machined the CB900 stem to fit the 954 triples. Then I rebuilt the forks with new seals and fresh oil; the front end was complete. On the frame I did some de-tabbing, added the kicked-up rear hoop and bracing under the headstock and beneath the swingarm. On my builds I take chances on what may or may not work; I’m always trying to do things a bit different. Sometimes it pays off and sometimes it doesn’t, this swingarm was no exception. I originally bought a ZRX1200 swingarm, as I figured the tube style would look excellent with the tube frame of the bike and it would allow me to run standard-style rear shocks. But when it showed up, the width of the swingarm is much wider than the CB frame and it just looked too bulky.

I could get busy modifying it to work or I could search for something different. I ended up going with a ’04 SV650 swingarm. Again it’s not a bolt on affair but it had the look I wanted, the length was 3″ more than stock and I knew I could make my own shock mounts easy enough. I manually milled out the shock mounts from solid billet and welded them to the swingarm. For the pivot I made a sleeve that fit with the SV bearings and allowed me to run the stock pivot bolt without any frame mods. The new shocks are Ohlins replicas from eBay; they looked the part, are fully adjustable and they fit the budget. The SV wheel was black and the front wheel was silver, so they both got new powdercoat in gloss black to match the engine cases. The rear wheel was also treated to a Vortex sprocket and a DID 520 chain and the engine has an offset Cognito Moto sprocket. [superquote]“I didn’t have anything ready to go for the show, so all of a sudden there was deadline on this CB750”.[/superquote]

So now we have a roller and again I’m looking for a buyer without success, so I begin wavering on keeping it. It’s now around April and I was invited to display another bike at the Freedom Machine show in July. I didn’t have anything ready to go for the show, so all of a sudden there was a deadline on this CB750. With the show in mind, I got busy planning out the remainder of the build. I had this KZ650 tailpiece kicking around and decided I would work with that as the lines suited the build well and it was something different to the traditional cafe ’hump‘. I created a wooden base to mount it to, body-worked it all together and shipped it off to my brother at Tuffside to mold it out of plastic and stitch up a seat for it.

With the seat created and frame hooped to match, I turned to the rearsets on the bike as I needed these in position before I could figure out the exhaust. I decided to go with a set of SV650 rearsets mounted to some machined bungs I made and welded to the frame. I worked once again with Scott Cartier at Hindle exhaust here in Canada to build a one-off system for this bike. [superquote]“For the frame, I decided to go red. I just kept thinking back to my old CR dirt bikes and their red frames”.[/superquote]

Once the mock-up was complete, I was able to tear it all apart and send the frame and other odds and ends off to Flashfire Coatings for final powder. For the frame, I decided to go red. I just kept thinking back to my old Honda CR dirt bikes and their red frames; it’s something I don’t see that often on street bikes aside from Ducati’s. The painting was handled once again by Mat Tobin at Jensens Custom Paint. Since the Honda was nothing but a frame and engine, every other part is brand new including a brand new wiring harness from Carpy’s Cafe Racers, a FZ07 master cylinder and clutch, Dyna ignition, an Antigravity battery, some Keihin CR’s, a projector headlight and an LED tail light. The tires are Bridgestone BT016s and the brake pads are Galfer. And if a potential new owner would like indicators and fenders, I’m sure I can help with that. Yes, it’s still for sale.